Legio Lysanda
("Sentinels of the Edge")

The Legio Lysanda ("Sentinels of the Edge") is a Titan Legion of the Collegia Titanica, one of the military arms of the Adeptus Mechanicus.

During the Great Crusade this particular Legion was often tasked with guarding the dangerous frontiers of the Imperium, watching over newly Compliant worlds until expeditionary fleets pushed the Imperium's boundaries further outwards.

In this task they excelled, for their patience was legendary and their princeps were often devoid of the thirst for glory shown by more aggressive Titan Legions.

The Legio Lysanda's personnel perceive trophies of war gifted to them as the highest honour and display them proudly upon their Titans to show dedication to the Imperium.

Before a Legio Lysanda princeps can ascend to command a Titan, they are required to sit in silent contemplation for seven solar days to ensure only those with true inner peace ascend to the role.

Many Legio Lysanda princeps spend time between conflicts alone in their god-engines, embracing the silence a sleeping Titan offers to better rouse it in times of war.

The Titans of the Legio Lysanda are primarily white with black and gold trim. Often, they paint checkered patterns on various parts of their god-engines.

The Legio Lysanda Legion badge is an aquamarine twelve-pointed star, with a small, white open circle centred within it, on a field of black. 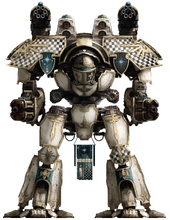 Princeps Honour Banner of the Warlord-class Titan Lord of Virtues. 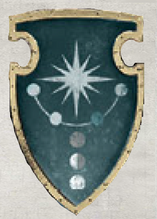 Princeps Honour Banner of the Reaver-class Titan Unfolding Wrath.
Add a photo to this gallery
Retrieved from "https://warhammer40k.fandom.com/wiki/Legio_Lysanda?oldid=361342"
Community content is available under CC-BY-SA unless otherwise noted.