During that most august undertaking, the Lords of Valour acquitted themselves with honour and bravery, adding numerous campaign triumphs to their war banners.

All that changed on Istvaan III, when they were subverted to the will of the Warmaster Horus. After that dark day, the Legio Interfector were known by a new name: the Murder Lords.

Madness has taken root within the ranks of the Legio Interfector. Those princeps not purged by the Warmaster during the Heresy have been driven insane by the knowledge of their deeds, turning in desperation to the voices whispering in their mind.

"If the hallowed Legio made us into giants, then it was the will of the Warmaster that made us gods."

The Legio Interfector is known to have supported an effort made by the Word Bearers splinter warband, the Foresworn, led by the Daemon Prince Kor Megron, to topple the Shrine World of Eydolim.

During the days of the Great Crusade, a company of the Word Bearers Legion under the command of Kor Megron was stationed on Eydolim to assist human colonists in settling the planet.

As was customary for them, the Word Bearers spread amongst the populace the belief that the Emperor of Mankind was a god incarnate -- a creed directly conflicting with the atheistic Imperial Truth, which was the official doctrine of the Imperium in that era.

When the company turned to the worship of Chaos alongside the rest of its Legion following the Pilgrimage of Lorgar, Kor Megron and his followers swore that their great work would not be complete until every last icon of the False Emperor was cast down and the Imperium itself no more than a distant memory. Each sealed this pact with blood and they anointed themselves as "the Foresworn."

They continued on this quest throughout the millennia after the end of the Horus Heresy, though their greatest goal had always eluded them -- the undoing of the magnificent works they had done on Eydolim in their former veneration of the Emperor.

To this end, in 946.M41 the Foresworn assembled a force of several Chaos Space Marine warbands -- the Red Corsairs, splinter warbands from the Black Legion, the Iron Warriors, the Night Lords and the World Eaters Legions, and secured the support of Dark Mechanicus Traitor Titans.

The Iron Warriors and Red Corsairs forces struck at Lector's Lowell, a Forge World located in the same star system as Eydolim, hoping to plunder the vast resources of the world's weaponariums for which the planet was rightly famed.

The forgemasters of Lector's Lowell were aware of the incoming Chaos assault, and rallied their Skitarii regiments to defend the world.

Soon after the Chaos Space Marines made planetfall, however, it became apparent that the Forge World stood little chance, as the Heretics were supported by the Traitor Titans of the Legio Interfector, a force the Skitarii could not hope to counter. Lector's Lowell was in dire straits.

In response to attacks carried out throughout the system, a sizable portion of Crusade Group Black Gate was diverted from its original assignment to support Imperial efforts in the Damocles Gulf to defend the world of Eydolim.

Units of the contingent, including nine regiments of Cadian Shock Troops as well as smaller dispositions of other Astra Militarum regiments, bolstered the undermanned Planetary Defence Force, and its grateful marshal offered overall command to the far more experienced Cadian commanding officer, who accepted the commission with humility.

Eventually, the Heretic Astartes made planetfall, and steadily pushed Imperial forces back, overcoming all resistance, until they finally reached the capital city of the world. Outmatched at every turn, the defenders looked to the heavens in desperation -- and beheld a miracle. The scions of Ultramar had arrived.

While fighting the aliens of the T'au Empire, the Ultramarines 2nd Company and a force of 1st Company Veterans accompanying them received orders from their Chapter Master, Marneus Calgar, to relocate to Eydolim.

Captain Cato Sicarius, with barely disguised enthusiasm, hastily diverted his force. Aboard the Strike Cruiser Valin's Revenge, the Ultramarines prepared to face their Traitor brethren. As the Heretics swarmed towards Eydol City, the Space Marines deployed their entire strength to support the Astra Militarum.

First contact between the Ultramarines forces and the Traitors took place in the munitorum district outside Eydol City. A small task force led by Epistolary Casmus daringly assaulted the Chaos Titans of the Legio Interfector which brazenly strode into the urbanised area, and succeeded in destroying one of those towering machines, in addition to damaging several others. This Imperial task force retreated only when a unit of the Red Corsairs moved to clear them out.

The two forces proceeded to clash in the climactic engagement of the campaign, the Battle of Eagle Gate. Eagle Gate was the sentinel of the city of Eydol's east road, the central point of an imposing curtain wall.

Reinforced with plascrete and bristling with automated turrets, it was a redoubt which no attacker had penetrated in the past, and yet during the Battle of Eagle Gate it was breached in several places -- long range bombardment tearing holes in its right flank, Titans of the Legio Interfector blasting great chunks from the walls on the left flank, and Khornate Space Marines supported by the Foresworn hurling the gates themselves open.

At the end, the wrath of the Foresworn and their allies was halted before the Gate of Martyrs -- the great eastern portal of Eydol City. There, the remnants of the Imperial forces made their last stand as Kor Megron hurled himself at the defenders, eager to slaughter them all.

Cato Sicarius stood defiantly before him as the Daemon Prince brought his weapon down in foul sweeps, battering the Space Marine captain with such ferocity that his knees buckled and his finely crafted Power Sword was notched and chipped.

Kor Megron stomped Sicarius to the ground and raised his weapon triumphantly. The final blow never came, however, as a lone Imperial Guardsman, upon witnessing the dire straits the captain was in, hurled himself at the daemonic monstrosity, careless for his own safety, and pierced the Word Bearer's flesh with his bayonet.

Kor Megron turned his attention to the brave soldier, and burned his body in a burst of Warpflame. This distraction allowed Sicarius to act, and he hastily thrust his sword upwards, piercing the Daemon Prince's breastplate and driving the blade into his corrupted heart. With a deafening scream, Kor Megron was banished to the Warp.

Disoriented by the loss of their leader, and worn to the breaking point by the Imperial defenders, the Chaos forces began to fall back. For the Imperium, a reprieve had been bought at great cost. For the legions of Chaos, there would be another reckoning...

Those princeps not purged by the Warmaster during the opening years of the Horus Heresy were driven insane by the knowledge of their deeds, turning in desperation to the voices whispering in their mind.

In battle, gibbering prayers of darkness and murder spill forth from the Legion's Titans, their war sirens broadcasting the insanity of the crew within. In battle, Legio Interfector Titans can scream out this stream of corrupting static from their war sirens, overwhelming their enemies with madness.

The roots of Chaos have dug deep into the wreckage of the Legio Interfector's Titans. Daemonic energies coil around the Machine Spirits of their god-engines, driving them to extremes of rage and madness.

The colours of the Legio Interfector were originally black with red trim and white flames, but after its fall to Chaos this changed to dark red with decoration in bronze.

The Legio Interfector's badge is a stylised, blood-spattered circlet with a black-bladed Flamberge -- a sword with a wavy blade -- pointed downwards. A small white skull icon is situated on the sword's crossguard. 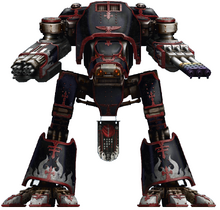 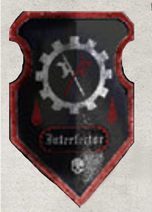 Legio Interfector Princeps Honour Banner of the Warhound Titan Fire of Betrayal.
Add a photo to this gallery
Retrieved from "https://warhammer40k.fandom.com/wiki/Legio_Interfector?oldid=360573"
Community content is available under CC-BY-SA unless otherwise noted.