Inveniam viam aut faciam
(""I will either find a way or I shall make one.")

Black and red; decoration in yellow and black
The Legio Ignatum ("Fire Wasps") is a Loyalist Titan Legion of the Collegia Titanica, one of the military arms of the Adeptus Mechanicus.

It is believed that this Legion was founded before the Age of the Imperium, during the Age of Strife.

The home of the Legio Ignatum is none other than Mars in the Segmentum Solar, the centre of the Cult Mechanicus and seat of its ruling Fabricator-General.

Their motto is Inveniam viam aut faciam which translates from High Gothic as, "I will either find a way or I shall make one."

Mars is also the homeworld of two other unnamed Titan Legions whose existence has remained classified.

The Legio Ignatum is one of the oldest and most esteemed Legions within the Collegia Titanica. Originating in the pre-Imperial Age of Strife they were, according to the legends of the Martian Lexmechanics, one of the Triad Ferrum Morgulus -- the three originating Titan Legions created by the besieged Cult Mechanicus during the bloody wars to take back the Red Planet from the degenerate hordes of Cy-Carnivora and mutant scavers that had overwhelmed Mars after the fall.

They had a long-standing rivalry with their fellow members of the Triad Ferrum Morgulus, most notably the Legio Mortis. The Legion fought throughout the Great Crusade and still retains a number of Titans blessed by the Emperor of Mankind Himself at that time.

Later, the Legion fought during the darkest days of the Horus Heresy, defending the Imperial Palace during the Battle of Terra against the insurmountable hordes of daemons and Traitors that the Warmaster Horus had brought to bear.

Innumerable tales of personal heroism and individual sacrifice survive from that time and the Fire Wasps have more than their share. To this day the Legio Ignatum is the only Titan Legion granted the singular honour of guarding the Emperor’s Throne Room, where the Master of Mankind is interred within upon the sacred Golden Throne.

After the siege of the Imperial Palace was broken, the Legio Ignatum went on to fight in most of the major campaigns of the Great Scouring, cleansing Imperial worlds of the Chaos taint of the Traitors. The Legion fought in the mighty conflicts on Paramar V and in the Tallarn System as it strove to drive the Traitor Titan Legions back. In these long and bloody campaigns the Princeps of the Fire Wasps came to know and hate with an abiding passion the Legio Mortis, old rivals which had now turned to dark heresy and foul worship of the Chaos Gods.

It was the Legio Mortis who breached the walls of the Emperor’s Imperial Palace, and it was the Deaths Heads Scout Titans who had terrorised and systematically destroyed the populations of a dozen hive cities on Paramar and Tallarn. The flames of hatred still burn hot and bright in the hearts of the Legio Ignatum -- and one day a reckoning will be made against the remaining Titan Legions amongst the Forces of Chaos.

The Legio Ignatum's colours are red and black; decoration is done in yellow and black, usually flame patterns or stripes.

The Legio Ignatum's badge is a wasp centered on a white delta (triangle), outlined in blue. Behind it is a field of red outlined in yellow. Below the central symbol are rows of skulls. 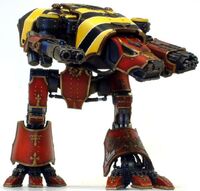 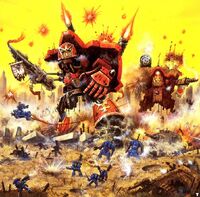 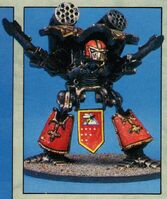 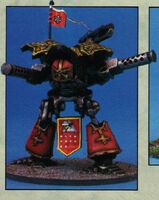