Even those of the Legio who had never laid eyes upon the red sands of their homeworld stood firm in the face of danger, the glory of Mars theirs to uphold.

Unfortunately, they were among the first Legios to be targeted during the event remembered as the Death of Innocence when the Martian Fabricator-General Kelbor-Hal first made his deal with the Warmaster Horus to turn against the Emperor, and initiated the Schism of Mars between the Loyalist Mechanicum rump and its treacherous Dark Mechanicum counterparts.

At the time, the Legio Fortidus was generally believed to have perished in the opening days of that Martian civil war, but those outposts of the Legio still fighting on the fringes of the Great Crusade continued to endure.

They forged a fearless reputation on dozens of worlds across the galaxy, bringing the Emperor's wrath to the Traitor forces of the Arch-heretic Horus, driven by the treachery committed against them and their need for revenge, despite their long, slow decline to extinction.

The exact date of the Legio Fortidus' founding, along with events that saw the bestowment of the cognomen "The Dauntless" upon the Titan Legion, is but one of many pieces of knowledge lost over the course of the Red Planet's history.

That it was forged during the Age of Strife remains the sole concrete truth, for the Dauntless stood guard over Mars when the Emperor forged His pact with the ancient Mechanicum, one amongst many Titan Legions bound to the planet.

What little that can be gleaned from scattered records collated during the Age of Strife tells of a Titan Legion unwilling to bow before impending doom. Indeed, the strength of the Legio Fortidus has both waxed and waned, the Titan Legion brought to the edge of extinction numerous times during the long millennia of warfare yet never truly broken upon the anvil of war before the coming of the Imperium.

Upon the departure of the Great Crusade from the Sol System, the Legio Fortidus was tasked with securing the power of Mars across the wider galaxy. Though the industrial capability of Mars was great, the ever-expanding demands of the Great Crusade ensured that even the Red Planet proved incapable of sustaining the many Titan Legions that had once walked upon the red sands.

To this end, the grand master of the Legio Fortidus was given leave to claim feudal rights upon distant worlds in Mars' stead along with the resources needed to construct functional outposts capable of sustaining a warring Titan Legion, or the means to acquire such provisions.

Unable to call upon the near-boundless resources of their homeworld, the Legio Fortidus sought out new means of supply, dividing into numerous autonomous battlegroups that served at the forefront of the Great Crusade.

By the time of the Warmaster Horus' appointment, the Legio Fortidus had spread far and wide, having claimed outposts on nearly a dozen worlds, each one capable of maintaining a portion of the Legio Fortidus' numbers, including the Knight World of Molech and the Industrial World of Bokiicatau.

In strength, the Dauntless had only grown, yet many of its princeps were Dauntless in name only, having never looked upon the red sands of the Legio's founding world nor witnessed the full gathered might of the Legio Fortidus.

When circumstances contrived to bring together disparate elements of the Titan Legion upon the battlefield, each battlegroup proved profoundly divergent from one another, its practices and methods of war influenced by the solar decades of separation from the core principles of the Legio Fortidus.

Fearing extinction through disunity, those Dauntless princeps who still remembered a day before the coming of the Imperium, when the Legio Fortidus had stood as wardens of Mars, proclaimed a new tradition: each solar decade, should the demands of war allow, a portion of the Legio Fortidus from each scattered fragment would gather on Mars within the fabled halls of the Titan Legion's ancient fortress.

There, in a show of brotherhood and unity, the princeps would share news of the Titan Legion's triumphs and losses from across the galaxy. In turn, such tales would be retold to those princeps who could not return, instilling a measure of unity for the Legio across the stars.

At the outset of the Horus Heresy, the Warmaster Horus sent the Dark Mechanicum representative Regulus to Mars to secure the tentative support of the fabricator-general of the Mechanicum, Kelbor-Hal, for Horus' coming rebellion against the Emperor.

Regulus convinced the fabricator-general of the Warmaster's resolve to support increased autonomy for the Mechanicum against the autocratic rule of the Emperor of Mankind. As a show of his appreciation for the fabricator-general's support, Horus provided information to Kelbor-Hal that allowed the Tech-priest to open a repository of forbidden knowledge from the Age of Technology known as the Vaults of Moravec, which the Emperor had ordered sealed.

When this repository was reopened, there was all manner of forbidden arcane knowledge and weaponry that had obviously been tainted by the corrupting influence of Chaos stored within.

Soon the corruption spread throughout the forge-cities and temples across the Red Planet as scrapcode -- Chaos-contaminated digital source code that was infected with an arcane computer virus -- infected the logi-stacks and cogitator (computer) archives of the Mechanicum, causing literal Chaos to emerge in any cogitator system that was networked to one of its infected counterparts.

The fabricator-general and his Dark Mechanicum allies used this disruption to marshal the strength of their forces, intent on bringing the rule of Mars firmly under their control. Thus, the Dauntless' vision of newfound unity was to be broken in the cruellest of manners, for as the princeps of the Legio Fortidus gathered on Mars, the treachery of the fabricator-general was revealed.

Both these once-proud Titan Legions were effectively eliminated from the roster of the Loyalist forces. Thus was the Legio Fortidus condemned to a slow extinction. In later years, this night would become known in Adeptus Mechanicus legends as the "Death of Innocence" -- and the start of the terrible Mechanicum civil war known as the "Schism of Mars."

Though the civil war on Mars claimed the majority of their god-engines and the oldest of their princeps, outposts of the Legio Fortidus and those still fighting on the fringes of the Great Crusade endured out among the stars.

When news reached the distant outposts of the Legio Fortidus of the fall of their most seasoned commanders and the destruction of the Titan Legion's most ancient god-engines, it is said that only rage could fill the void such a loss left behind.

Devoid of aid from both Mars and other Dauntless battlegroups, each pocket of the Legio Fortidus became, in its own eyes, the sole survivors of the Titan Legion. Reliant on small outposts, well-developed as they were, few such battlegroups were capable of sustaining the losses the Horus Heresy would bring, yet retreat and isolation was not a notion entertained by any amongst the Titan Legion.

On a dozen worlds across the galaxy, the god-engines of the Legio Fortidus forged a fearsome name for themselves, displaying a distinct lack of care for their own well-being, as if death, be it the Traitors' or their own, was the sole goal of the Titan Legion's princeps.

With the majority of their Legion destroyed on Mars, the surviving princeps seniores of the Dauntless were forced to become more flexible in their tactics and use whatever Titan assets they could call upon to aid them.

Conviction in their cause drove the princeps of the Legio Fortidus with new determination, and they were able to throw off the distracting pains of the MIU and force their Titans to respond to their commands no matter the damage they might suffer.

Such was the wound inflicted on the Dauntless by the Traitors that their princeps were often more than willing to sacrifice themselves if it meant grievous injury could be dealt to the followers of Horus.

Titans are mobile fortresses as formidable to bring down as any redoubt of steel and stone. The Fortis Battle Maniple was a defensive formation, allowing Titans to resist assaults from numerically superior foes or the massed firepower of enemy war engines.

Standing shoulder to shoulder, the Titans of a Fortis Battle maniple shrugs off devastating hits with overlapping void shields and locked armoured plates.

Before betrayal dealt it a grievous blow during the Schism of Mars, the strength of the Legio Fortidus was well-recorded, with data collated from the numerous outposts of the Titan Legion noting 127 active god-engines of varying classes and sizes in service to the Legio Fortidus, which marked it as a Secundus-grade Legio.

Of these, over a third were Warlord-class Battle Titans, with the remaining god-engines made up of other Warhound Scout and Reaver Battle Titans, as well as several Imperator and Nemesis Titans within their ranks.

The outbreak of the Horus Heresy saw this number vastly diminished, and the true cost of betrayal may never be known. What is clear is that the Death of Innocence, the name given to the event that resulted in the revelation of treachery upon Mars, destroyed 53 god-engines and claimed the lives of the majority of the Titan Legion's greatest Titans.

The catastrophe upon Mars was not the only act of betrayal to bring disaster to the Legio Fortidus, for two recorded instances tell of Mechanicum fleets ferrying Dauntless Titans laid to waste when the guns of presumed allies were turned upon the vessels.

Following such losses, the Legio Fortidus could call upon an estimated 40 god-engines though these numbers were located across the galaxy in separate battlegroups and incapable of joining together. Furthermore, there proved a lack of consistent supply in order to arm the Dauntless battlegroups and replenish their numbers, resulting in significant deviations from standard tactical patterns laid down within the Collegia Titanica's charters.

The most notable adaptation forced upon the Legio Fortidus was the abandonment of the conventional Titan warfare role, with the varying battlegroups forced to deploy certain Titan classes in roles they were not designed for, such as utilising Reavers and Warlords as vanguards in the absence of Warhounds or other Scout Titans.

The colours of the Legio Fortidus are primarily red and white trimmed in brass. The primary colour red indicates their origins and allegiance to the Martian Mechanicum homeworld of Mars.

The Legion badge of the Legio Fortidus is a black skull wearing a Roman-style helmet. A longitudinal crest in the form of a half-cog sits atop the skull's head, reminiscent of the crests worn by the Praetors of the ancient Legiones Astartes.

These symbols are centred within a larger white cog on a field of red. 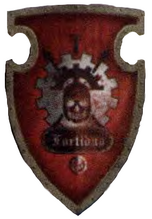 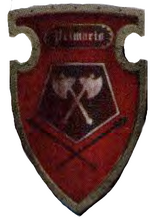 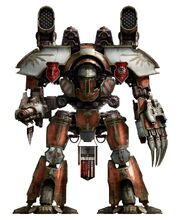 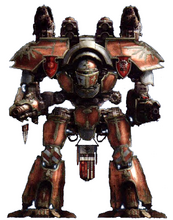 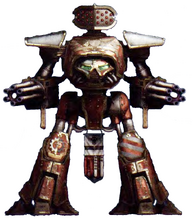 Legio Fortidus Reaver-class Titan armed with an Apocalypse Missile Launcher and a pair of Gatling Blasters. 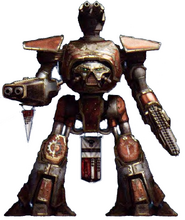 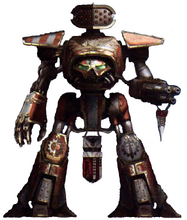 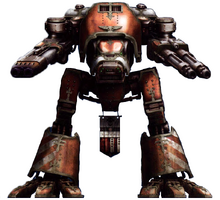 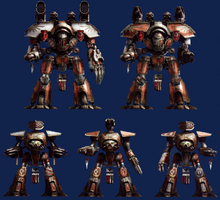