The Legio Defensor ("Nova Guard") is a Loyalist Titan Legion of the Collegia Titanica, one of the military arms of the Adeptus Mechanicus. It is based on the world of Satyraes XII.

There is very little information in Imperial records about this obscure Titan Legion, though they are suspected to have been founded before the Age of the Imperium, during the Age of Strife.

During the Horus Heresy, the Legio Defensor contained many devotees of the Lectitio Divinitatus, the text which first postulated the belief that the Emperor was the god of Mankind.

It was not unusual for those of the nascent Imperial Creed to pray to the divine God-Emperor before battle. They would often decorate their battle stations with icons of religious significance, such as warding tokens and other icons, like the double-headed eagle known as the Aquila.

For the most part, their prayers only functioned to irritate their brethren, though sometimes their faith in the Emperor could manifest in miracles when the circumstances were right...

Little is known about the early history of the Legio Defensor, save that it was most likely founded during the bygone era known as the Age of Strife. By the time of the Great Crusade, however, the Legio Defensor proved to be a stalwart and dedicated Titan Legion that served honourably during many Imperial Compliance actions to reunite the disparate worlds of humanity under the rightful rule of the Emperor of Mankind and His burgeoning Imperium of Man.

In the waning days of the Great Crusade and the first years of the Horus Heresy, the teachings of the Lectitio Divinitatus began to take root within the armies of the Imperium. Of all of the Titan Legions, the Legio Defensor, or Nova Guard, contained large numbers of those sworn to the nascent Imperial Creed, and its Princeps were well-known for their righteous wrath.

Many Legio Defensor Princeps felt rage rise within them when battle was joined against a Traitor force. Transmitted through the MIU, this hatred reaches down into their Titan's plasma reactors, and the burning heart of the god-machine increasing the Titan's power output.

The Legio Defensor had a well-deserved reputation for standing their ground, no matter the odds. These qualities were among those that drew the praise of the Emperor Himself, and earned them many honours during the Great Crusade. Utterly devoted to the Emperor, the Nova Guard rarely gave ground in the face of Traitors, preferring to martyr themselves than fail their master.

Often during the Horus Heresy, when a Nova Guard Princeps recognised the heraldry of a particularly hated foe, they would ignore all other enemies in their sights and unleash a torrent of weapons fire against their chosen adversary, pushing their Titan hard to score the first hit.

Many Warlord Titans of the Nova Guard often marched into battle fitted with devotional war sirens. These blaring speakers issued forth Lectitio Divinitatus devotional chants and sermons on the divine glory of the Emperor, filling their brothers with renewed hope and purpose.

The colours of the Nova Guard are white, black and green with gold highlights.

Originally, the Legion's livery was the twin sunburst motif, which depicted the twin suns of their homeworld of Satyraes XII which would later become the Emperor's divine crown of light after their incorporation within the Imperial forces.

Despite the rise in popularity of the Lectitio Divinitatus among the ranks of the Legio Defensor, the prominent displaying of its religious iconography was still strictly prohibited by the Collegia Titanica at the time of the Great Crusade.

During the battles of the Beta Garmon campaign in the Horus Heresy, the Legion bore the symbols of their homeworld Satyraes XII. Central to the Legion's heraldry of Satyraes is the stag, its skull lit by the Forge World's two suns.

Legends among the Legion tell of a time when the people of Satyraes worshipped their great forest stags as gods, now believed by the Satyrii to be a forerunner manifestation of the Emperor.

Beneath these icons of old Satyraes, skulls indicate the Titan's battlefield victories, while the signum nobilis details its maniple and rank laid out in the form of axe blade icons.

The 1st Edition-era Nova Guard's badge was depicted as a red sunburst, centred on top of an orange sun. Below the red sunburst was a letter "D" (possibly a reference to the Roman numeral for the number 500).

Below these was a vertical line of three skulls. The background field was halved, with green on the left and a lighter greenish-brown on the right. 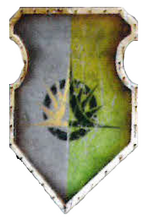 A Legio Defensor livery shield, displaying the Legion's colours and double-starburst heraldry, which represents their homeworld of Satyraes XII's twin-suns. 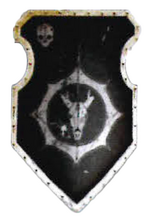 A Legio Defensor livery shield displaying the divine crown of light, representing the glory of the Emperor. Centred within this crown is the stag heraldry of the Legion's homeworld, Satyraes XII. 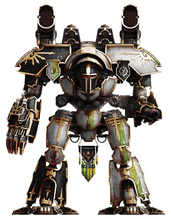 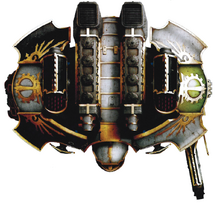 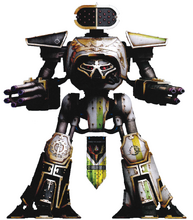 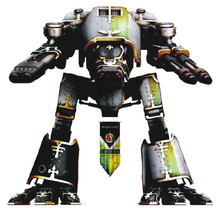