Black and White with Gold trim
The Legio Crucius ("Warmongers") is a Loyalist Titan Legion of the Collegia Titanica, one of the military arms of the Adeptus Mechanicus. This Titan Legion is known to have been founded before the Great Crusade, most likely during the tumultuous era called the Age of Strife.

This Titan Legion has its great perceptory and base of operations at Ryza, a major Forge World within the Segmentum Ultima. Ryza is renowned for the manufacture of Plasma Reactor and magnetic containment field technology. The arts and sophistication of this Forge World is claimed by some to be second only to that of Mars itself.

It is then unsurprising that the Legio Crucius, whose associations with Ryza are said to predate the Great Crusade, is renowned as one of the most well-equipped Titan Legions in Imperial service, and sufficient in number to provide garrison forces for several smaller outlying Forge Worlds and Adeptus Mechanicus outposts whose magi maintain fealty or alliance to Ryza and its masters.

At some point in its history, Ryza was unsuccessfully invaded by Ork WAAAGH! Grax, and the Greenskins have continued to threaten this vital Forge World in the 41st Millennium, mounting two more invasions -- the latter of which is still ongoing in the Era Indomitus.

As the green tide sweeps over Ryza, once more the god machines of the Legio Crucius walk to protect their homeworld, supported by Astra Militarum regiments sent to aid the world and by entire armies of Leman Russ Executioner tanks driven straight from the factories into the maelstrom.

The mighty weapons of the Adeptus Mechanicus light the horizon with their fury, and yet still the Orks advance.

Amongst the echelons of the Cult Mechanicus, Ryza, founding Forge World of the Legio Crucius, stood second only to Mars in power and prominence by the end of the Great Crusade. Located within the Ultima Segmentum, its position was secured by both its raw manufacturing power and its tactical location, which lent great aid to the Great Crusade's efforts to expand towards the galactic east.

Above all else, Ryza possessed both unparalleled expertise in the engineering and production of plasma technology and a Titan Legion which, at its zenith, rivalled the power of the original three Titan Legions of Mars' founding Triad Ferrum Morgulus in size and strength.

The history of Ryza before the coming of the Imperium is well-documented, for its archivist-magi were supremely diligent in their work. Though the Age of Strife had brought many trials to Ryza and its people, they had weathered them all and emerged from the other side greater for it.

In the Standard centuries following the colonisation of Ryza, a sect of the ancient Mechanicum quickly grew in power, becoming known as the Omnissiah Igvita, literally the "Life Blood of the Omnissiah." It was the Igvita that drove the planet's focus towards plasma technology, believing that plasma was the lifeblood of the Omnissiah Himself and, through its usage, the people of Ryza were bestowed a measure of His power.

In time, the Omnissiah Igvita became ingrained within the culture of Ryza with many of the sect's most ardent followers modifying their forms to incorporate some measure of plasma technology. By the time of Ryza's rediscovery by the Imperium, the Forge World had built an empire that spanned numerous star systems and the Omnissiah Igvita was hailed as the primary motive force behind such glory.

No more evident is the influence of the sect than in the initial communiqués dispatched by Imperial emissaries sent to Ryza upon first contact, with one delegate noting in her report that, "Their passion burns hotter than a furnace...like many of their ilk, they are esoteric and strange, none more so than those that have shackled the stars within their hearts." Thus was born the title "The Furnace of Shackled Stars," an honorific for Ryza that has held to this day.

Though agreement between the Imperium and Ryza was reached with little issue, there were those amongst the Cult Mechanicus, especially within sects native to the Red Planet, who noted with much trepidation the substantial resources and knowledge Ryza claimed as its own. Attempts to allay those suspicions, in the form of shared schematics for improved plasma drives and other similar innovations, were only partially successful for, like all Forge Worlds, Ryza hoarded its most precious knowledge, shielding it from the prying eyes of outsiders, even from its fellow Tech-priests.

Compared to their contemporaries, the majority of Legio Crucius Titans were fresh from the forges. These Titans enjoyed the benefits of systems that had not faced the excesses of plasma overloads or countless combat repairs, and so fared better in those critical first moments of an engagement between god-engines.

Concerns among the magi of Mars escalated as the Great Crusade progressed, for the strength of the Legio Crucius continued to expand, fuelled by the extensive manufacturing capacity of Ryza. Indeed, the strength of the Legio Crucius was not contained solely to Ryza and the Warmongers eagerly sought out new worlds over which they could claim feudal rights.

So it was that, by the outbreak of the Horus Heresy in the early 31st Millennium, the Legio Crucius had laid claim to nearly two dozen outposts, each representing a significant forge-fortress garrisoned by a dedicated battlegroup of god-engines tasked with the defence and prosperity of their charge.

While suspicions towards Ryza's growing power by Mars no doubt stemmed, at least in part, from a desire on the part of the Martian Mechanicum to control the Furnace of Shackled Stars and its resources, in hindsight, there was some validity in them.

Amongst the expeditionary fleets in which they served, the Legio Crucius were famed as planners and forward thinkers, renowned even among the exacting war-logic of the Mechanicum for their prowess in strategy and contingency planning. Having observed the methods enacted by Forge Worlds such as Phaeton to avoid the displeasure of Mars, and the anger such a move generated in response, it became evident to many amongst the Legio Crucius that a time would come when a new war might be waged; a war between Titans.

The expansion of the Legio Crucius was, in part, a direct reaction to such a notion. As outposts of Legio Crucius sprung up across the galaxy, under pretence of protecting vital worlds and lending the strength of Ryza to those less able, each was instilled with a directive to ensure that, should a great darkness befall Mankind, the Legio would live on.

This forethought did much to preserve the Legio Crucius' strength during the Horus Heresy. On a handful of worlds, including the Knight World of Molech, battlegroups of the Warmongers fell victim to the Warmaster Horus' wrath and, though the loss of even a handful of Titans was a keen blow to any Titan Legion, the greater strength of the Legio Crucius was not harmed by such injuries.

Perhaps the greatest threat to the continued prosperity of the Legio Crucius came during the Defence of Ryza, when the Warmaster's allies descended upon the Forge World intent upon claiming it as their own. Though the Horus Heresy was far greater in scope than even the most dire of predictions, a contingency plan designed to combat a direct assault upon Ryza had been enacted.

Following directives issued to them solar decades before, those outposts closest to Ryza were abandoned, each one's personnel journeying to the Forge World. More distant garrisons remained where they were, preserving their corner of the galaxy in acknowledgement of the fact that, should Ryza fall, others must continue its legacy.

When the Traitors were thrown back from the Forge World, the Legio Crucius was much diminished yet stood far from powerless, and what strength remained departed to the stars in pursuit of the invaders and in search of surviving pockets of Warmonger elements.

Following the fall of the Warmaster, much of the Legio Crucius had been reconnected and it was clear that though the war against Chaos remained far from over, the foresight of the Legio's masters had proved enough to preserve them for millennia to come.

Officially, according to records supplied by Ryza, the strength of the Legio Crucius sat at 152 god-engines a solar decade before the Horus Heresy began, marking it as a Primus-grade Legio. Subsequent events, such as the unexpected emergence during the Heresy of the once-secret Ryzan Knights of House Sidus, throw doubts upon this number as, if suspicions are correct, Ryza concealed a measure of its true military strength from all outside their domain.

Attempts to further clarify the total strength of the Legio Crucius have proven difficult and require data collated from multiple sources of varying objectivity; of the 17 confirmed outposts dedicated to the Legio Crucius, at least 57 god-engines were recorded as part of their garrisons, yet a total of 36 god-engines are recorded to have been garrisoned upon Ryza at the same time and a further 82 in active service upon the Great Crusade's expeditionary fleets, giving a number above the recorded total.

Further confusion of total strength is added when one considers the emergence of Warmaster-class Titans from many Forge Worlds during the days of the Horus Heresy, of which at least two are now known to have been in service to the Legio Crucius.

It should, therefore, suffice to say that the official count is conservative at best and, in a move no doubt intended to hide the true strength and location of all of its god-engines, a not inconsiderate number of Legio Crucius Titans were concealed from the gaze of others.

The last piece of data that should be considered is the recorded number a solar decade after the Horus Heresy ended, placing the remaining strength of the Legio Crucius at 74 god-engines, a number significantly smaller than even the most conservative of pre-Heresy estimates.

The colours of the Legio Crucius are black and white with gold trim.

The Legion badge of the Legio Crucius is a black gauntlet curled into a fist, superimposed over an Adeptus Mechanicus gear. A white letter "T" representing the identifier for the Collegia Titanica is located on the back of the gauntlet. 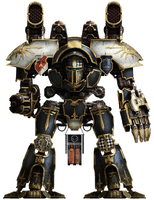 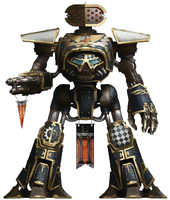 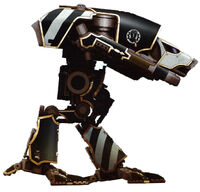