The Legio Confindo ("Sun Cleavers") was a Loyalist Titan Legion of the Collegia Titanica.

This Legion hailed from the Forge World of Byrrus Alpha, located in the southwestern Segmentum Ultima. During the Horus Heresy, a portion of the Legion split off and joined the cause of the Arch-Traitor Horus.

The rest of the Legion remained on their homeworld as its garrison. However, when word reached them of their kindred's treachery against the Emperor, they immediately departed to track down their wayward brethren and seek a reckoning.

The Byrrus Alpha System was discovered early in the Great Crusade, on the fringes of what would become the Five Hundred Worlds of Ultramar.

It was almost bypassed by the crusade forces, designated as lifeless, until the expeditionary fleet received a message from far beneath the surface of Byrrus Alpha welcoming the Imperium to what proved to be a subterranean Forge World, its inhabitants hidden from the deadly solar radiation that bathes the planet's surface.

The Tech-priests of Byrrus embraced the Martian Mechanicum once more, and the Titan Legion known as the Sun Cleavers was attached to the world, though most of its god-engines left to accompany several Space Marine Legions in battle.

During the Great Crusade, this Legion's ferocity and predilection for pushing their plasma reactors hard to close with enemy war engines and take them down, garnered the Sun Cleavers a mixed reputation.

Where the Word Bearers heralded them for their zeal, the Ultramarines found their impetuosity often made them a rogue element in battle.

Perhaps their most enduring relationship was with the Iron Warriors. Perturabo made good use of the Legion, sending them against the towering fortresses of the Bernean Empire to disrupt artillery fire while Iron Warriors breached the walls and moved in.

Perhaps it was Perturabo himself who turned some of the Legio Confindo princeps to Horus' service, or maybe the scorn of the Ultramarines embittered them.

Either way, when the Ruinstorm split the galaxy after the Battle of Calth, the princeps on Byrrus Alpha lost contact with their fellows across the galaxy, and what fragmented messages made it through the roiling tempests of the Warp told stories of Sun Cleavers bombarding Loyalist Space Marines and falling upon the defenders of innocent worlds.

The Confindo princeps remaining on Byrrus swore solemn oaths to bring their errant kin to justice, but before they could fulfil their pledges, they were called to fight in defence of Primarch Roboute Guilliman's Imperium Secundus.

When the Ruinstorm dissipated following the Second Battle of Davin, they set out to make good on their oaths, following reports of the Traitors mustering in the Beta-Garmon cluster. One way or another, the engagements there would decide the fate of the Legio Confindo.

The Legio Confindo favoured forces that moved fast and hit hard, preferring to get in close and either achieve a monumental victory or suffer catastrophic defeat.

The princeps of the Sun Cleavers' Warlord Titans preferred high-powered weaponry, such as Belicosa Volcano Cannons that could devastate opposing Titans -- even at the risk of overheating their own reactors and angering their Titans' Machine Spirits (artificial intelligences).

The colours of the Legio Confindo are purple, gold and red.

The badge of the Legio Confindo is not listed in current Imperial records. 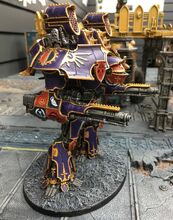 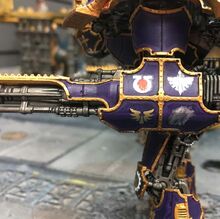 Legio Confindo Warlord-Titan arm weapon casing depicting various honour marks -- notably, the icons of several notable Space Marine Legions including: Ultramarines, Dark Angels and Blood Angels icons. This suggests that this Titan defended the Imperium Secundus. One icon is noticeably scratched out, perhaps that of one of the Traitor Legions.
Add a photo to this gallery
Retrieved from "https://warhammer40k.fandom.com/wiki/Legio_Confindo?oldid=361099"
Community content is available under CC-BY-SA unless otherwise noted.