"The Ember Wolves do not shirk from the fight. For we are ferocity made metal. The doom of mightier machines. We bring gods to their armoured knees."

The Legio Audax ("Ember Wolves") is a Traitor Titan Legion of the Dark Mechanicum that repudiated its oaths to the Emperor of Mankind and followed the Warmaster Horus into the service of the Ruinous Powers during the Horus Heresy.

The Ember Wolves assisted the World Eaters Space Marine Legion throughout the Great Crusade after they were attached to the 13th Expeditionary Fleet's order of battle, and they shared this Astartes Legion's savage approach to combat.

In the final days of the Great Crusade, the Legio Audax received most of its supply and maintenance services from the Redjak Mechanicum of the Forge World of Sarum, which was liberated by the World Eaters and had pledged itself to the service of the 13th Expeditionary Fleet thereafter.

This alliance allowed the Titans of the Legio Audax to be equipped with scaled-down versions of Ursus Claw systems -- the great harpoons used by the World Eaters' flagship, the Conqueror, for boarding actions.

Another peculiarity of the Legio Audax was that its complement consisted solely of Warhound Titan-variants that possessed more armour plating than was standard, and used pack tactics when engaging larger foes.

It is known that the Ember Wolves numbered approximately 90 god-machines in the aftermath of the destruction of Armatura.

During the opening years of the Great Crusade, the Legio Audax, or "Ember Wolves," as they were more commonly known, were one of several elements deemed by the Terran War Council as being suitable for use against targets where annihilation was the goal rather than Imperial Compliance or liberation, a task to which they seemed eminently suited.

A pall of suspicion had fallen upon the Ember Wolves ever since the Lorin Alpha Massacres. As such, they were brought together under the banner of the 13th Expeditionary Fleet, known commonly as the "Bloody 13th," alongside a variety of units who, like the Ember Wolves, had gained dark reputations for unrestrained violence rather than military discipline, or who were otherwise deemed as unsuitable for actions where collateral damage was to be kept to a minimum and liberation rather than outright destruction was the goal.

This included the savage and deadly War Hounds Space Marine Legion (later known as the World Eaters), to whom the Ember Wolves would become synonymous with.

Originally a Vanguard demi-Legio, the Ember Wolves had quickly developed an alarmingly savage and dangerous reputation, and was looked on as becoming almost bestial by the Titan Legions it fought alongside.

The Legio Audax were a rare example of a Titan Legion employing solely Warhound Scout Titans within its hosts, a deviation attributed to the corruption of many of the Legion's STC patterns during conflict with the xenos empire of Zlassalr.

Though the Ember Wolves lacked the reserves of firepower commonly available to other, more conventional, Titan Legions, they overcame such challenges through the deployment of hunting packs that lurked out of sight until the most opportune moment to strike.

The match of this savage set of semi-outcasts with the World Eaters was a natural one, and in battle the tendencies of both for brutal, direct assault married well together. However, the close allegiance of the Ember Wolves to the Primarch Angron rather than their distant Mechanicum masters was cause for growing concern for the Collegia Titanica.

This matter only worsened with the breaking of the siege of Sarum by the 13 th Expeditionary Fleet in the opening action of the great Golgothan Slaughter.

After liberating this Mechanicum outpost, the grateful Tech-priests of the Redjak Covenant quickly embraced their saviours the World Eaters as allies. They swore to Angron and his Legion directly many oaths of fealty and entered into pacts of mutual protection and support.

For the World Eaters this provided the Legion and its Techmarines with a ready source of resupply and armament far outside the lmperium's inner spheres.

This allowed, among other benefits, the reconstruction of the Legion's badly damaged flagship Battle Barge, the Adamant Resolve, into the heavily-armoured Conqueror, fitted with arrays of Ursus Claw systems -- great void-harpoons designed to spear enemy vessels and drag them within reach of bloody boarding actions.

Smaller-scaled versions of these Ursus weapons would be modified to also arm the Warhound Titans of the Legio Audax and the World Eaters' assault Dreadnoughts in turn.

Unusually amongst the Titan Legions, the Legio Audax relied solely upon various classes of Scout Titan in the prosecution of war, a practice that saw the Titan Legion develop a reputation as peerless hunters.

Armaments such as Vulcan Mega Bolters, Turbo Lasers, Inferno Cannons and Natrix Shock Lances were common amongst the battle-packs of the Legio Audax, suiting the close-ranged warfare the Ember Wolves were famed for.

In concert with close assault elements of the World Eaters, maniples of Legio Audax Titans would stalk the streets of enemy cities, the greater speed and manoeuvrability offered by their Warhound Titans allowing them to flank enemy contingents and purge them with ruthless efficiency.

The Ursus Claw was a weapon originally designed for use upon the voidships of the World Eaters Legion. Owing to their close association with the XII Legion, the Ember Wolves soon adopted a modified version of the weapon for use on their god-engines, which proved effective in hunting xenos beasts during the Great Crusade.

When the Legio Audax turned against the Imperium, it turned these tactics upon Loyalist Titans, with packs of Warhounds tearing down larger Titans with deadly efficiency.

The Legio Audax became infamous for its prolific use of ambushes utilising Ursus Claws. Their Warhound Titans often strode into battle bedecked with trophies taken from the larger Titans they had felled.

Better known as a Battle-Pack, the use of Canis Light Maniples was perfected by the Legio Audax. This maniple configuration utilised a Warhound's speed to launch brutal ambushes as they fell upon their Titan prey with unbridled fury.

Each of the Legion's Titans is bulkier from additional armour plating and wears a head of dark metal, resembling a wolf or jackal baring it's teeth.

This Traitor Titan Legion's badge is not listed in current Imperial records. 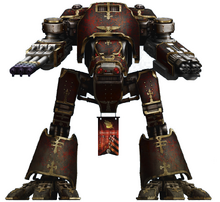 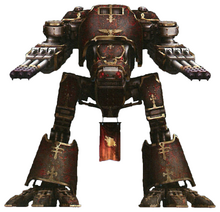 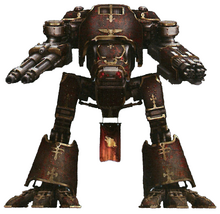 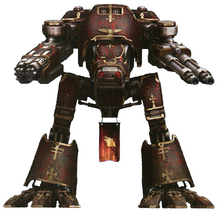 Multiple Legio Audax Warhound-class Titans utilising "Ursus Claws" to bring down a Loyalist Imperator-class Titan.
Add a photo to this gallery
Retrieved from "https://warhammer40k.fandom.com/wiki/Legio_Audax?oldid=381384"
Community content is available under CC-BY-SA unless otherwise noted.