Red, White, Black and Gold
The Legio Atarus ("Firebrands") are a Loyalist Titan Legion of the Collegia Titanica, one of the military arms of the Adeptus Mechanicus.

Young by the standards of many other Titan Legions, the Firebrands were formed in the latter part of the Great Crusade on the remote world of Atar-Median by exiles from the Forge World of Phaeton.

Distrusted and looked down upon by many of their brethren in the Adeptus Titanicus, the Legio Atarus had to prove themselves time and again, gaining a reputation as being independent and headstrong.

Despite this reputation, the Firebrands would go on to prove their mettle where other, more lauded names, would ignominiously fall.

Years of war and headstrong commanders gave the Machine Spirits (artificial intelligences) of Firebrands Titans their own distinctive personalities. When the Machine Spirit takes control of the Titan, it is even more determined than ever to close the distance with its foes.

Many princeps cannot see beyond the ancient tactica doctrines laid down by the Collegia Titanica -- not so the Firebrands, who practise the theorems of adaptive warfare.

This is most evident in their flexible approach to the concept of the maniple, individual princeps often changing their tactics in the midst of combat.

Perhaps the Firebrands' most defining moment came during the Shedim Drifts campaign, when the Warmaster Horus callously sacrificed dozens of their Titans to attain victory -- a slight that the Legio would not soon forget, and which ultimately led the Legio to side with the Loyalists during the Horus Heresy.

Before the dark treacheries of the Warmaster Horus plunged the entire galaxy into bloodshed, the Firebrands were considered by some to be a particularly fractious and ill-disposed Titan Legion.

Distrusted and looked down upon by their fellow Titan Legions, the Legio Atarus would go on to prove their loyalty and unswerving dedication to the Emperor.

The seeds of the Firebrands' ill-repute during the Great Crusade can be traced to the highly unusual circumstances of their inception. In the early years of the Great Crusade, one of the first tasks of Imperial expansion from Terra was to link up with a number of key domains within the Segmentum Solar identified as vital to the Great Crusade's success.

Critical among these were several Forge Worlds with whom the ancient Mechanicum of Mars had maintained some relationship throughout the tribulations of the later Age of Strife.

In many cases, these inclusions went without difficulty, such as with the world of Voss whose masters had bent the knee to Mars without qualm, but on others such as Phaeton, inclusion was the matter of some negotiation and difficulty, and the final acquiescence bought with considerably more autonomy than the fabricator-general of Mars would perhaps have preferred from a vassal-domain.

What began as a coldly cordial relationship quickly grew into one of veiled and open rivalry, with Phaeton's position being further strengthened by it quickly becoming perhaps the second most productive Forge World of the Great Crusade until the later discovery of mighty Anvilus.

Although never faltering in its commitment to the Great Crusade, machinations by the authorities of Mars brought matters close to outright conflict over religious doctrine and subtle accusations that Phaeton was building its military assets to threatening levels, and this began to have a corrosive effect on the Forge World's reputation -- to the point where the storm clouds of hostile censure and perhaps even armed retribution gathered.

At last, the revered-comptroller of Phaeton Prime, realising that his domain could not stand before such power, brokered a compromise, offering publicly to give up a full third of his world's god-engines, armed forces and chattels in the interests of equanimity with Mars.

This was quickly agreed, but as the fabricator-general, no doubt with some lust for the task, despatched an assayance taskforce to Phaeton, he discovered that he had been outmanoeuvred.

Rather than give up its lore and dominion to Mars, Phaeton had created a fleet of vast Explorator Arks, and into these were divided an equal third part of its priesthood, chattels and machineries, and even as the Martian emissaries looked on, despatched them into the void.

Conflict was averted, Phaeton diminished and its subservience to Mars was assured, but it and its allies gained a long-burning enmity towards the Red Planet and its masters.

After a long and perilous journey through the Warp, the Phaetonite Covenant alighted in the vicinity of the white super-giant star Atarath, on what was then the edge of known space.

Here they founded the fledgling Forge World of Atar-Median in its shadow, on one of the many rogue planets caught in the colossal star's gravitational pull.

With frightening swiftness the transplanted magi rose up from their domain of steel and fire, and using as its core ancient god-engines taken from Phaeton in the anarchy of Old Night, it founded the Legio Atarus as its shield and sword.

Counted then as one of the younger Titan Legions, the Legio Atarus were looked down upon by many among the more ancient Titan Orders, and distrusted for their origins by some with close ties to the fabricator-general's faction on Mars, where a bitter humour over Atar-Median's founding still lingered. The Legio Atarus therefore was always a force who had much to prove.

They responded to this status both by the eagerness and devotion which they displayed for the Great Crusade and its cause (over and above the fealty they owed to the Martian Mechanicum), and by displaying defiance and swift anger when they felt themselves slighted by any other Legio.

Their zealous impetuousness in battle and the open belligerence and pride in arms they displayed, combined with the symbol of the burning blade they had adopted as their heraldic device, quickly set the cognomen by which the common soldiery of the Imperium would know them -- the "Firebrands."

For much of the latter third of the Great Crusade, it was common for the Firebrands to operate several separate demi-legios as was the common case with many Secundus-grade Titan Legions, and seldom came together en masse for battle.

It was commonly the case for one demi-legio to be rotated through deployment on Atar-Median for repair and refit between major engagements, with the bulk of the Legio deployed to different warzones as needed as part of the overall Imperium military reserve, and seldom stayed attached to a particular expeditionary fleet for long.

Particular campaigns which saw the notable actions of the Firebrands during this period included the Liberation of Vayber and the 2nd Gehenna Campaign, the great Ullanor Crusade and the Lament of Shedim.

In this last campaign, a notable incident occurred which was to have a later bearing on events of the Horus Heresy and accounted, in part, for the presence of Demi-legio Karkanos of the Firebrands at Isstvan V.

During the war in the Shedim Drifts against the Craftworld Aeldari, a mighty clash occurred on the arid world of Anark Zeta between the forces of the craftworld of Mór-ríoh'i and the Great Crusade.

The vast Imperial force raised to destroy the marauding craftworld included detachments from no fewer than four Titan Legions: the Legio Mortis (Death's Heads), the Legio Fureans (Tiger Eyes), the Legio Osedax (Cockatrices) and the Legio Atarus, and was under the overall direct strategic command of Horus Lupercal and his (then) Luna Wolves Space Marine Legion.

During the apocalyptic battle which raged on the planet's surface, the Legio Atarus was used as part of a probing attack against the Asuryani Warp Gates. This was successful in drawing forth the ash-grey and crimson Titans of the enemy in open battle.

Heavily engaged and outnumbered by the ghostly war machines of the xenos, the promised support of the Death's Heads did not materialise, while the Titans of the Tiger Eyes, holding the Firebrands' flank, crumbled under the Craftworld Aeldari assault and retreated, leaving a full demi-legio of the Firebrands to be encircled and all but destroyed, with only a single Warhound-class Scout Titan surviving the engagement still able to fight.

In the aftermath it was revealed that the attack had been a ruse, a distraction planned by the Lupercal to divert the strength of the enemy away from the direct defence of their craftworld while his Space Marine Legion undertook a surprise-assault against it.

The war of the Shedim Drifts was a great victory for Horus and all those of the Imperium who fought in the campaign gained glory because of it, but to attain that victory the Legio Atarus had been cruelly used without its foreknowledge or consent, and its losses worsened by the callous scorn held for it by the Legio Mortis and the Legio Fureans in their refusal to stand beside them in battle.

It was an injury the Firebrands would not forget when the fires of the Horus Heresy were unleashed.

Counted by the assessors of the Divisio Militaris as a fully operational Titan Legion of the second rank, the Legio Atarus was estimated to have between 100-130 god-machines in active service at the time of the outbreak of the Horus Heresy.

It was also known to possess a highly respected armoured support battalion and Skitarii Auxilia Legion as part of its retainer forces (known collectively as the "Brotherhood of Axxos.")

Like many Secundus-grade rated Titan Legions, the Legio Atarus' principal strength in number ranged across the mid-classes of Titan, with Reaver, Nightgaunt and Carnivore-classes making up the majority of its ranks, with sizable contingents of the Warlord and Warhound-classes constituting the balance of their Titan forces.

It is believed the Legio Atarus possessed a single Nemesis-class Titan, the Immaculata Athartus, which served as the god-engine of the Legion's Grand Master Everard Mazarin, and the primary defender of the Forge World of Atar-Median.

In times of war or when the Forge World itself came under threat, the Legion could also call upon its allies of the Col'Khak Collective, a Knight House established on the nearby planet of Atar-Planitia. During the Battle of Beta-Garmon, the Legio Atarus was supported by House Arakon and House Vornherr.

The colours of the Firebrands are red, white, black and gold. As each Battle Titan is a sacred weapon of the Adeptus Mechanicus, each is revered by its crew and served by an army of attendant Tech-priests.

A Battle Titan's primary armaments carried to war bear the seal of the Adeptus Titanicus, a holy mark professing the sanctity of the weapons.

These purity seals are intended to keep the weapons functioning in battle and bear prayers to the Omnissiah, the victories of the Legio, and the names of the magi and Tech-priests who have attended the god-machine.

Upstarts and rebels in the eyes of the Adeptus Mechanicus, the heraldry of the Legio Atarus nonetheless attests to their loyalty to the Emperor with the iconography of the Imperium.

Their primary symbol is a burning brand centered within the Opus Machina, the symbol which earned the Legio Atarus their more common moniker -- the "Firebrands."

The cog within a cog speaks to the division between Phaeton and Mars, a dispute many within the Firebrands still considers an unnecessary act of submission, even of it did ultimately lead to the creation of their Legio and the founding of Atar-Median.

Few Legions have had to fight as hard as the Firebrands to earn their place among their fellow Titan Legions, and every Legion banner contains a long list of campaign honours, each a victory for the Legion and shared by all members of the Firebrands. 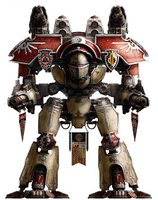 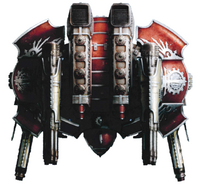 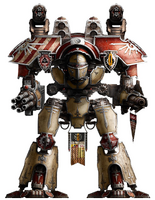 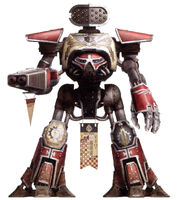 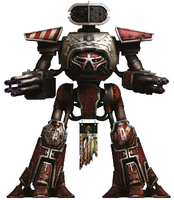 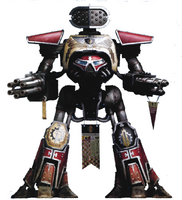 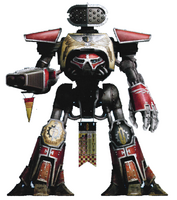 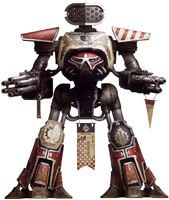 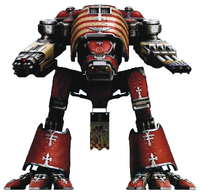 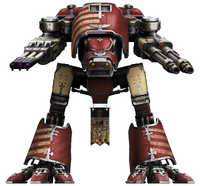 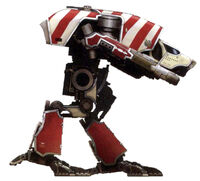 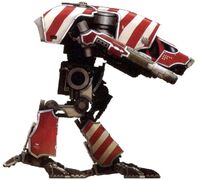 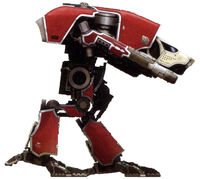 A Janissary Battle Maniple formation of the Legio Atarus 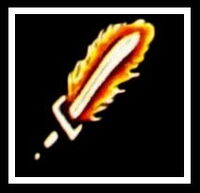