The Legio Astraman ("Morning Stars") is a Loyalist Titan Legion of the Collegia Titanica.

The Legio Astraman is based on the Forge World of Graia. They guard the Belt of Iron, the name given to a region of space spanning the Segmentum Tempestus and Segmentum Pacificus that was home to many less potent Forge Worlds.

The history of the Forge World Graia and the Legio Astraman is intrinsically linked to the Belt of Iron, a name given to a region of space spanning the border sectors of the Segmentum Tempestus and Segmentum Pacificus which contained numerous lesser Forge Worlds. When the colony arks sent forth from Mars during the Age of Strife reached the planet that would become the Forge World of Graia, they found a world overrun by warring tribes of Feral Orks. Though the presence of the xenos made initial attempts at colonisation far from simple, it also proved to be the first test of the yet-unnamed Titan Legion that would come to form the basis of the Legio Astraman.

The exact origin of the name "Morning Stars" is unknown and unrecorded, bar that it was bequeathed upon the Legio Astraman during the colonisation of the Forge World. Speculation as to the provenance of the name makes reference to fragmented reports of battles that took place during initial landfall upon the planet, with data-fragments stating that "...preceded by thunderous steps they came...striding forth haloed by the first rays of sun...and lo did the creatures blister and burn, as the wrath of the Omnissiah shone like a star amongst their ranks."

It was the strength of the Legio Astraman that ensured Graia thrived during the Age of Strife, expanding its reach to over two dozen star systems by the time contact was made with the newborn Imperium of Man in the late 30th Millennium.

The Morning Stars' success can be attributed to three defining factors. The first was the construction of an extensive network of manufactoria that were capable of producing Titans, allowing the expansion of the Legio Astraman to a size equivalent to that of a Primus-grade Titan Legion. Secondly, its tenacity and firm resolve, for which the Legio Astraman quickly became known during the Great Crusade, bred a Titan Legion capable of overcoming the numerous threats they faced.

Lastly, the magi of Graia laboured for standard centuries to construct a network of orbital platforms around the Forge World, each bristling with weapons while offering additional residential and research capacity, should it be required. This network became known as the "Crown of Graia" and served to alleviate the need for large numbers of Morning Stars god-engines to remain deployed in defence of the Forge World, allowing the Legio's strength to be focussed on Graia's more distant holdings.

Thus, when the Great Crusade finally began its expansion into the Segmentum Pacificus, it found a prosperous "Forge Empire" defended by a Titan Legion of considerable size.

The strength of the Legio Astraman ensured that initial contact between Graia and the Imperium was tense, for the representatives of the Emperor voiced concerns that any attempt to conquer the Forge Empire of Graia would be a protracted and bloody affair. It was with much relief to such individuals that Graia appeared willing to join the Imperium with minimal resistance and, in return for their service, the Forge Empire was granted feudal rights to an additional handful of star systems which the Imperium had already conquered.

The rediscovery of Graia proved advantageous for the Imperium as the Titan Legion's god-engines were sorely tested in the solar decades following the Forge World's rediscovery.

Expansion across the region of space that would eventually become known as the "Belt of Iron" saw the Imperium encounter many Forge Worlds of varying strength, some of which were protected by Titan Legions of their own.

The first such world to be encountered after Graia was the Forge Empire of Valia-Maximal and the now-infamous Titan Legion known as the Legio Laniaskara ("Impalers") that defended it. Unlike Graia, the people of Valia-Maximal were not open to Imperial Compliance and opposed the Imperium with all their might. Though Valia-Maximal eventually fell, it did so only after a protracted campaign in which the Morning Stars and the Impalers inflicted considerable damage upon one another, which in turn inflicted irreparable damage upon the diplomatic relationship between the two Forge Worlds.

Further conflict with dissident Titan Legions, such as the Legio Venator, was not uncommon during the Imperial conquest of the two segmentums, though it was not the sole war front on which the Legio Astraman fought during the Great Crusade.

Indeed, the Morning Stars soon earned themselves a name serving alongside the Raven Guard Legion, thanks in part to the Titan Legion's overreliance on data-predictions to dictate their tactics which enabled them to proactively support the clandestine nature of the Raven Guard's preferred tactics.

By the time of onset of the Horus Heresy in the early 31st Millennium, the Legio Astraman was perhaps one of the foremost experts in fighting other Titan Legions, thanks largely to their participation in the conquest of various Renegade Forge Worlds, marking them out as a potentially significant threat in the war to come.

Presuming the loyalties of Graia would be difficult to gain, emissaries of the Warmaster Horus instead turned Valia-Maximal to their side, stoking the fires of resentment and placing the two long-antagonistic Forge Worlds in direct opposition.

When the latter publicly declared for the cause of the Warmaster, Graia found itself pulled into an escalating conflict with Valia-Maximal and its Legio Laniaskara, leading to the recall of much of the Morning Stars' strength. Their numbers proved valuable following the eruption of full-scale war across the Belt of Iron.

Over two-thirds of the strength of the Legio Astraman was committed to the region and the resulting conflict, known as the Cataclysm of Iron, was to see hundreds of worlds devastated, with even Graia itself feeling the tread of Traitor god-engines when the Legio Laniaskara fell upon the Forge World.

What strength the Legio Astraman held elsewhere in the galaxy soon found itself drawn into the deadliest conflicts of the Horus Heresy, including the chaotic maelstrom of the Beta Garmon campaign.

In the dark days following the fall of Horus at the Siege of Terra, it was the Morning Stars that discovered Valia-Maximal abandoned, the once-prosperous Forge World left barren save for the desecrated husks of those Morning Stars Titans that had fallen during the conflict, unable to be retrieved.

Since that day, the Legio Astraman has vowed to pursue the Legio Laniaskara to the end of the galaxy, until such a time as its memory has been banished.

Like all military forces drawn from Graia, the Morning Stars possess an innate tenacity and refusal to yield, never retreating, even in the face of certain death. The princeps of the Legio Astraman are trained to operate with reduced systems, pushing them to better understand the limitations of their god-engines. The iron will of their princeps are legendary and nothing can dissuade them from their chosen path.

They are careful to ensure their assigned god-engine is always operational at peak condition, monitoring all systems even in the heat of battle. They also believe in facing adversity head-on and will not baulk in the face of a charging foe.

The strength of the Legio Astraman benefited greatly from both the manufacturing capacity of Graia and the Imperium's need to sustain their numbers in conflicts with enemy Titan Legions during the Great Crusade, such as the Legio Laniaskara and the Legio Venator.

To ensure that the attrition of such conflicts did not wear down the Morning Stars' numbers, over a dozen lesser Forge Worlds in close proximity to Graia were tasked with supplying the Legio Astraman with materiel and, where possible, Titans. Through careful negotiation, this flow of resources was maintained until the outbreak of the Horus Heresy which saw the strength of the Legio Astraman stand at 156 god-engines, marking it as a Primus-grade Legio.

Given the ancient status of this Titan Legion, several of these were of rarer classes including at least three Imperator Titans, of which one fell upon Urdesh and has yet to be rebuilt. Of the remaining Titans, the Morning Stars showed a preference towards the deployment of Warlord Battle Titans, with nearly half their number drawn exclusively from its ranks.

The remaining god-engines utilised by the Legio Astraman were split evenly between Scout and Battle Titans, with numbers of both maintained at equivalent levels to ensure the Titan Legion could adapt to any situation.

The colours of the Legio Astraman are green, yellow and blue; decoration is sometimes added in white and blue (usually stripes or checker-patterns).

The iconography of the Legio Astraman Titan Legion is a black morning star outlined in gold, centered upon a shield which is half gold, and half blue and white chevrons.

This central icon is crowned by a golden Iron Halo and centered upon a field of green. 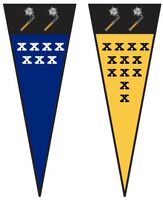 Titans of the Legio Astraman 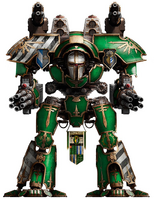 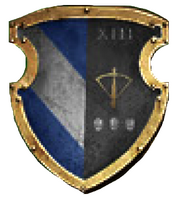 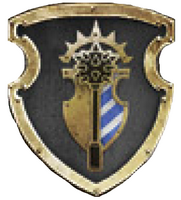