"The Demolisher, the Vanquisher, even the mighty Deathstrike Missile Launcher pale in comparison to the sheer firepower of trillions of lasguns unleashing hell in unison."

The Lasgun, also sometimes referred to as a Lasrifle, is a directed-energy antipersonnel weapon used by the military forces of the Imperium of Man, and it is the most common and widely-used type of laser weapon in the galaxy.

It is standard-issue for the Adeptus Mechanicus' cybernetic Skitarii infantry, all Astra Militarum rank-and-file infantry and most junior Astra Militarum officers. Lasguns are reliable, easy to maintain and to produce, and are readily available on most Imperial worlds.

A Lasgun has a longer range than a Laspistol, but is nowhere near as powerful as a Lascannon nor does it possess the rapid-firing qualities of the Multi-Laser or the Hellgun. Though not as powerful as kinetic projectile weapons such as the ubiquitous Bolter, the lower cost of production, the lack of a requirement for ammunition production and resupply make the Lasgun the best choice for the large forces of the Imperial Guard.

The Lasgun uses a small portable capacitor power pack to produce a focused pinpoint laser beam which is strong enough to take an ordinary human arm off with one shot but is not as effective against the more durable alien bodies and stronger types of personal armour. A Lasgun's beam also cauterizes the wounds it inflicts due to the immense heat given off by the shot. The Lasgun is effective when used en masse, but considerably less effective when used alone.

The Lasgun uses the same basic technology and operates along the same lines as other laser weapons, emitting a beam of highly-energetic, focused, coherent photons. The high amount of energy carried by the photons of the beam causes the immediate surface area of a target to be vaporised in a small explosion.

It is a relatively unimpressive weapon when compared to many of the other high-technology weapons available in the galaxy, but it is capable of cleanly severing limbs and potentially even piercing the Power Armour of a Space Marine (but usually only through a vulnerable spot in the armour).

Most Lasgun designs have iron sights mounted along the top of the weapon. It is powered by a small rechargeable power pack located beneath the weapon and in front of the trigger guard which can be recharged in a number of ways, including by sunlight. These power packs can also be "overcharged", a trick used by Imperial Guard veterans, which causes the pack to explode, turning the weapon into a makeshift grenade.

This tactic is only used in last-ditch situations as it results in destruction of the weapon. Lasguns have numerous power settings for adjusting the power of each shot and to conserve power (resulting in a weaker laser shot fired). The weapon can be overpowered with a "Hotshot" laser capacitor pack, providing more powerful but fewer shots.

The Lasgun mounts a bayonet lug, allowing the weapon to be fitted with bayonets or combat knives. The sniper variant of the Lasgun, known as the Long-Las, is the preferred weapon of the Imperial Guard's sharpshooters. The barrel of the Long-Las is extended to bolster the weapon's accuracy. The barrel requires replacement after every 20-50 shots depending on the power setting and cooldown time. For this reason, the Long-Las is outfitted with a "slide-lock" barrel, which is easily locked and unlocked from the weapon's housing.

The standard Lasgun pattern used by the Imperial Guard is known as the M35 "M-Galaxy" Pattern, first put into use in 2546.789.M35, although thousands of variant models, marks and patterns exist. The Cadian Shock Troops, for example, commonly bear the M36 Kantrael Pattern Lasrifle, originally manufactured on Kantrael as the name suggests, which is a weapon known for its sheer robustness.

The Catachan Jungle Fighters prefer the Mark 4 Lascarbine, which has less cowling than the M36 and is therefore lighter and easier to carry in the dense jungle environs preferred by the Catachan regiments. Other common marks include the easily manufactured Mars and Armageddon Pattern Lasguns, the much sought-after variable power setting Triplex Pattern and the short-barelled, folding-stock models used by Imperial Guard mechanised infantry, tank crews and troops assigned to starship or space station details.

Even more exotic are the intricately crafted heirloom weapons used by the troops of regiments of the Vostroyan Firstborn and the Accatran Pattern Mark IV, which is much valued by Elysian Drop Troops and other drop troopers for its compact size and accuracy at short range. Despite these variations, the main mechanism of every Lasgun remains the same in almost all regiments.

This makes the logistics of supplying multi-regiment armies a much simpler matter for the Departmento Munitorum. Other variants of this weapon include the more compact Laspistol, the anti-armour Lascannon and the more powerful and expensive Hellgun. The Imperial standard Lasgun, as used by most of the regiments of the Imperial Guard, has many attachments including (but not limited to) several types of scope, bayonet, laser sight and flashlight.

The Lasgun and Laspistol are weapons generally meant for dealing with lightly armoured infantry, and thus lack the brute power of more advanced weapons from the Imperium's arsenal, like Bolters or Plasma Guns. This has led the weapon to be scorned by some of the Imperial Guard's soldiers and officers as "flashlights."

However, a Lasgun's relative power should be assessed only when comparing it with more powerful Imperial weapons, as even a Laspistol beam is capable of killing an unarmoured target, causing immediate death. When set to maximum power, Lasguns have been known to penetrate weak spots in Chaos Space Marine Power Armour, with the shot penetrating the neck joint or even decapitating the foul creature in an instant.

But the Lasgun excels at massed volley fire. A hail of las-shots from dozens, if not hundreds of Lasgun barrels can stop the charge of hordes of lightly-armoured opponents like Chaos Cultists or Ork Boyz dead in their tracks. Concentrated las fire upon even a very powerful single armoured target can eventually overwhelm that target's armour.

Despite its lack of damage output, the Lasgun remains a favoured weapon of Imperial soldiers, for it has many redeeming qualities. It is a solid and rugged weapon that remains reliable and precise in almost any environment, and requires very little maintenance -- a quick cleanup while mumbling a prayer to the weapon's Machine Spirit after usage is all that is needed to keep it going for over 10,000 shots, after which the focusing crystals must be replaced, an action that requires the intervention of a knowledgeable Tech-priest.

Unlike a Flamer or a Meltagun, the Lasgun can be outfitted with a bayonet or used as a club at close quarters without risk of damaging the weapon, and it will never overheat with potentially fatal results for its operator like a dreaded Plasma Gun. Another redeeming quality of the Lasgun is that its power pack can be recharged by exposure to sunlight or by being put into a camp fire for a few minutes, ensuring that the weapon almost never runs out of ammunition, even on prolonged operations or in situations where resupply is unlikely.

The following represent the standard specifications of an M-G Short Pattern Lasgun as recorded in The Imperial Infantryman's Uplifting Primer, Damocles Gulf Edition:

A Las-Lock is an energy weapon that uses much of the same technology as a standard Lasgun or Laspistol, but more closely resembles a flintlock rifle. Las-Locks are, presumably, adaptations of present-day laser weapons technology that are used by less technologically advanced societies who have regressed from the modern day Imperial standard.

Las-Locks are single-shot, with primitive capacitors that require the need to reload after every shot. While this presents many problems with the rate of fire, the single laser bolt that Las-Locks fire is considerably more powerful than those fired by standard Imperial laser weapons.

Las-Locks are often seen in use by the occupational troops deployed by the Forces of Chaos when they seize an Imperial planet, particularly the law enforcement forces known as the "Excubitors." However, many Astra Militarum soldiers, especially those with an interest in archaic weapons, will carry Las-Lock rifles or pistols as back-up weapons.

A Lucius Pattern No. 98 Lasgun used by the Death Korps of Krieg

A Mark 4 Lascarbine often used by the Catachan Jungle Fighters

A Mark 4 Lascarbine often used by the Catachan Jungle Fighters 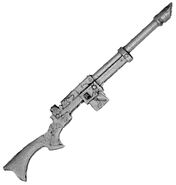 A Voss Pattern Lasgun used by the Armageddon Steel Legion

A Hellgun used by the Tempestus Scions