The Land Speeder Storm is also equipped with baffled engines, which severely reduces their noise output, and a sophisticated spy array that helps gives the speeder an advantage during hit-and-run attacks.

Often ranging ahead of the main Space Marine force, Land Speeder Storms can move into enemy territory unseen, making them ideal for launching surprise attacks. They are at once a mobile fire point, an assault transport and a stealth insertion craft.

Thanks to well-timed Land Speeder Storm strikes many a foe of the Imperium has lost a battle before they even knew they were in one.

The exact origins of the Land Speeder Storm are unknown, though the vehicle is widely used by the Ultramarines, the Raven Guard, and their Successor Chapters.

It is unknown if the vehicle originated with either of these Chapters. While the Land Speeder and several of its most common variants are used by most, if not all Space Marine Chapters, the Land Speeder Storm is all but unknown to many Chapters, such as the Space Wolves and the Blood Angels.

The Cerberus Launcher is used to stun the enemy while the Scout Marines disembark from the vehicle, and it fires a disorienting volley of fragmentation, stun, and blind rockets into the enemy position. When combined with the high speeds of the Land Speeder and the disorienting effects of the Cerberus Launcher, the Scout Marines are able to quickly take enemy positions that may have been thought of as impenetrable.

The vehicle also carries an extensive array of spy sensors and communications and sensor jamming arrays. The vehicle's jamming array can disrupt enemy Teleport Homers and similar wargear within a wide area around the Land Speeder.

The Land Speeder Storm, like the standard pattern Land Speeder, has no additional enhancement options such as Extra Armour Plating or Smoke Launchers, but the vehicle's pintle-mounted Heavy Bolter can be replaced with a Heavy Flamer, a Multi-Melta, or an Assault Cannon.

A standard Land Speeder Storm is armed and equipped with: 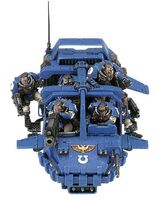 A Land Speeder Storm of the Ultramarines Chapter

A Land Speeder Storm dropping off a squad of Space Marine Scouts
Add a photo to this gallery
Retrieved from "https://warhammer40k.fandom.com/wiki/Land_Speeder_Storm?oldid=352278"
Community content is available under CC-BY-SA unless otherwise noted.