The Land Raider Proteus is a rare pattern of Land Raider that was originally designed and deployed during the Dark Age of Technology and its Standard Template Construct (STC) data was rediscovered for the Imperium during an expedition deep into the Librarius Omnis on Mars by technoarchaeologist Arkhan Land early in the Emperor's Great Crusade of the late 30th Millennium.

The Land Raider Proteus contains an extraordinarily sophisticated Auspex sensor suite known as an Explorator Augury Web that allows it to determine existing battlefield conditions with an uncanny degree of precision. This technology, combined with the design's great antiquity, has led many in the Adeptus Mechanicus to surmise that this pattern may be the very first Land Raider design created by Mankind during the Dark Age of Technology, intended to explore and conquer new worlds during humanity's first expansion out into the galaxy.

Its exceptional sensor capabilities makes the Land Raider Proteus an excellent choice to serve as a command tank and to spearhead large armoured assaults. However, since it has a small troop transport capability, lacks an integrated forward assault ramp and possesses advanced technology that is difficult for current Forge Worlds to manufacture, the Land Raider Proteus is rarely used by the Space Marine Chapters of the late 41st Millennium, yet saw extensive use by the Space Marine Legions during the Great Crusade.

However, because of its antiquity, the Land Raider Proteus is considered a valuable relic of any Chapter lucky enough to have one in its armoury. The Land Raider Proteus is also sometimes deployed by various Chaos Space Marine warbands, as the Traitor Legions possessed a number of these vehicles during the Horus Heresy and fled with them into the Eye of Terror.

The Hereteks of the Dark Mechanicum work hard to keep these few machines combat-ready for their patrons. It is common for these foul Tech-adepts to replace any failing components on these ancient war machines with arcane devices of Chaos or daemonic origin.

The Land Raider Proteus is believed to be the very first Land Raider design created by Mankind during the Dark Age of Technology to be used as a main battle tank.

The Land Raider Proteus design was lost to humanity during the Age of Strife, yet a single copy of its Standard Template Construct (STC) designs were recovered by the technoarchaeologist Arkhan Land early during the Emperor's Great Crusade on an expedition into the Librarius Omnis on Mars. The newly rediscovered designs were named after Arkhan Land and eventually the Land Raider Proteus could be found in every one of the Space Marine Legions.

Mechanicus tech-savants believe that the Land Raider Proteus is a precursor to the standard Land Raider Phobos pattern vehicle now found amongst the armouries of the Adeptus Astartes. Bulkier and faster than the Phobos, ancient and forgotten data-looms describe the Proteus as a forward assault vehicle, commonly fielded in Explorator missions during the dawning days of Mankind's fledgling galactic empire.

The Land Raider Proteus would be used throughout the Great Crusade even after complaints emerged concerning the vehicle's carrying capacity, lack of a forward assault ramp, and inability to carry Terminators would lead to the development of the Spartan Assault Tank, and eventually the Land Raider Phobos.

It is likely that the Proteus was the most common mark of Land Raider used by the Imperial Army, the combined main line military of the nascent Imperium that was split into the Astra Militarum and the Imperial Navy in the galaxy-wide reorganisations that took place in the aftermath of the Horus Heresy. Or course, no Land Raiders of any pattern remain in the armouries of the Imperial Guard, the vehicle long since reserved for the near-exclusive use of the Adeptus Astartes.

Amongst the most revered of those few Land Raider Proteus still in existence are some that must surely have been utilised in the very earliest phases of the Great Crusade. Many of these war machines were equipped with an array of scanners and cognis-interpreters that are likely to pre-date the Age of the Imperium by countless millennia.

Such devices may only be awakened and operated by the most lore-steeped Adepts of the Machine God, for they utilised machine processes and logis protocols otherwise unknown in the late 41st Millennium. Referred to in hushed tones amongst the Tech-priests as Explorator Augury Webs, these devices were once used to coordinate the epic battles fought by the Emperor's Space Marine Legions as they re-united the scattered worlds of humanity.

In the late 41st Millennium, the Land Raider Proteus is largely just a memory. As a result, any Chapters that have a functioning Land Raider Proteus treat it as a treasured relic, as this pattern is no longer being constructed, and any that still exist date back to the era of the Great Crusade or the Horus Heresy.

Believed by certain war-savants to be an example of sacred machine-evolution, the Land Raider Proteus displays early features of the Mark IIb Land Raider Phobos. These include enclosing its twin-linked Lascannon in bulky armoured sponsons and adding to this formidable anti-armour firepower with a limited traverse twin-linked Heavy Bolter recessed into the forward hull armour. The vehicle was also always equipped with a searchlight and a pair of smoke launchers.

The vehicle's hull-mounted, twin-linked Heavy Bolters could also be replaced with a set of twin-linked Heavy Flamers. It was possible for the Land Raider Proteus to be outfitted with a Hunter-Killer Missile Launcher, a Dozer Blade, an Auxiliary Drive System, Extra Armour Plating or Armoured Ceramite Plating. The vehicle could be upgraded with a variety of Pintle-mounted twin-linked Combi-Bolters or other Combi-weapons, a Havoc Missile Launcher, and either a single Heavy Flamer, Heavy Bolter, or a Multi-Melta. The Land Raider Proteus was also equipped with a Machine Spirit, an artificial intelligence crafted by the Mechanicum of Mars.

This Machine Spirit was advanced enough to move the tank and continue combat operations even if the crew was injured or otherwise incapacitated, increasing the durability and firepower of the Land Raider considerably. By the end of the Great Crusade, many of the Legions began removing the Explorator Augury Web system to make room for several more passengers, and many of the Land Raider Proteus tanks were upgraded to the Armoured Land Raider Proteus variant, which includes armoured cowlings for the sponson weapons, giving them a greater degree of protection.

A Relic Land Raider Proteus is armed and equipped with:

A Relic Land Raider Proteus may take one of the following pintle-mounted weapons:

The Relic Land Raider Proteus may also have a variety of vehicle equipment such as:

During the Great Crusade and Horus Heresy eras the Land Raider Proteus of the Legiones Astartes featured different weapon loadout options than those relics still found in the 41st Millennium.

A standard Legion Land Raider Proteus was armed and equipped with:

A Legion Land Raider Proteus may take one of the following pintle-mounted weapons:

The Legion Land Raider Proteus may also possess a variety of vehicle equipment, including:

When in a squadron of three, one Legion Land Raider could be upgraded to the following:

Of all the variants of the Land Raider in service with the Space Marines and their fallen kin, the Proteus ranks amongst the most ancient. Conceived to serve at the leading edge of the expeditionary fleets during the Great Crusade, the Proteus is at once an armoured carrier, a mobile base of operations and a vehicle of exploration.

Those examples of the Proteus in the service of the Chaos Space Marines are veterans of the very earliest days of the Great Crusade. They fought at the spearhead of the first expeditionary fleets as they penetrated the darkness of the galaxy. They explored worlds steeped in alien corruption where the air itself was death even to the transhuman Legiones Astartes. They crossed wastelands of dust made from the destruction of empires that had risen and fallen before Mankind had even looked to the stars.

The relic Proteus Pattern Land Raiders that survived are in many cases the scarred veterans of these earliest expeditions into the darkness. They faced, defeated and survived such horrors as can scarcely be imagined, even in the fevered ravings of the most Warp-blasted Heretic.

When the vehicles' masters joined Horus in his great betrayal, xenos corruption and horror was piled upon the taint of the Warp. Machine Spirits already harbouring countless unseen scars were brutalised still further by the influence of the Dark Gods.

The result was a machine driven by a daemonic will that is the hybrid of xenos abomination and the corruption of the Ruinous Powers. The thing that now resides at the heart of the Chaos Land Raider Proteus is neither Machine Spirit, daemon or alien.

It is all of these, making the Proteus a darkly potent engine of war resonating with the unnameable horror of a galaxy steeped in death and insanity. 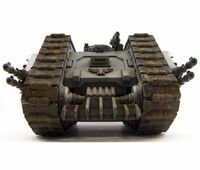 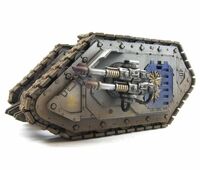 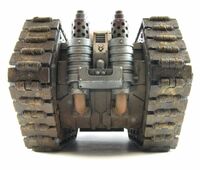 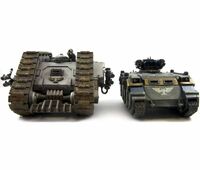 A Land Raider Proteus adjacent to a Razorback transport; the Proteus is on the left 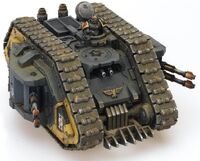 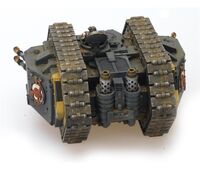 Land Raider Armoured Proteus of the World Eaters Legion; this Land Raider Proteus has been retro-fitted with enhanced armoured sponson embrasures to increase protection for its primary Lascannon armament

An Ultramarines Legion Land Raider Proteus, Lhatyrion Compact, served with that Legion's 7th Chapter for over a Terran century. Despite its very poor external condition, it was mechanically flawless and well maintained.

A Land Raider Proteus of the Thousand Sons Legion, Karakh; note the archetypical ornamentation on the vehicle's side access panel. It depicts the Legion's primary iconography below a compound glyph including the emblem of the winged "Achean" scarab. Occult geometric forms below this icon honour the vehicle's past campaigns and service.

A Space Wolves Land Raider Proteus Pawn of Ymgr. This is one of a number of Proteus Land Raiders used during the Razing of Prospero in the assault on the capital city of Tizca, whose ancient Augur arrays have long since been removed to allow these venerable vehicles to carry a full squad of Space Wolves.

A Night Reapers Renegade Chapter's Chaos Land Raider Proteus, Argus Rex; this vehicle is listed as having engaged units of the Adeptus Astartes Red Templars in 991.M41 during the so-called Harrowing of the Night Reapers

A Land Raider Proteus in action during the Istvaan III Atrocity

A Land Raider Proteus of the Red Scorpions Chapter

Ancient camouflage colour schemes utilised by both the Imperial Army and the Legiones Astartes
Español
Community content is available under CC-BY-SA unless otherwise noted.
Advertisement