The vehicle features an advanced Vox signal booster allowing it to coordinate units at long-range, including ground-to-ground and ground-to-orbit. The Land Raider Prometheus shares several features in common with the Damocles Command Rhino, and as such is capable of fulfilling the role of an Astartes strike force command and control hub if a Damocles is not deployed or is disabled.

The origins of the Land Raider Prometheus are shrouded in mystery. There are some Tech-priests of the Adeptus Mechanicus who believe that it was first developed as a variant of the long-lost Land Raider Tartarus, though little evidence to support this assertion has been forthcoming. At least one archival record depicts the vehicle, or else one resembling it very closely, fighting on the side of the Loyalists during the early battles of the Horus Heresy.

Others believe that it was first developed on Nocturne in the renowned forges of the Salamanders, and certainly that honoured First Founding Chapter retains more examples of the Prometheus than any other (although even they are thought to hold only four). The Salamanders deny being the source of the variant and it is unknown how many other Chapters still hold a Land Raider Prometheus deep within their armouries.

In more recent times the Prometheus has gained fame for its ability to act both as a command vehicle and as a war machine. The most famous action involving the Prometheus in recent Imperial annals was during the Masali Campaign, where Force Sicarius, comprised of an Ultramarines force, led by the 2nd Company's commander Captain Cato Sicarius, came under heavy attack by Aeldari Corsairs. The Aeldari outnumbered the Ultramarines force three-to-one, and Sicarius only had access to a Land Raider Prometheus and two Land Speeders.

The Prometheus was first used as a defensive anchor in which the Ultramarines were able to keep the Aeldari from advancing, and after the first assault was repulsed, the Prometheus was able to bring its two sets of Quad Heavy Bolters to bear against the attacking Aeldari Guardians, killing many in only a matter of seconds. The Prometheus then turned its weapons, guided by their advanced targeting systems, against the Aeldari Jetbikes.

Aeldari Jetbikes, which are normally very difficult to target due to the high speeds at which they travel, were targeted and systematically destroyed. After the Jetbikes were dealt with, Sicarius ordered his reserve forces, which were stationed to the north, to attack the Aeldari from behind. Captain Sicarius and his squads surrounding the Prometheus moved forwards and cut-off the remaining Aeldari, who were eventually destroyed.

Outwardly, the most visible difference between the most common patterns of the Land Raider and the Land Raider Prometheus is its weaponry, with the Quad Heavy Bolters in each sponson replacing the Land Raider's Lascannon to provide a storm of fire to cut swathes through enemy infantry and light vehicles. It is standard practice that all Prometheus Land Raiders are armed with a pintle-mounted Storm Bolter for close-in anti-infantry defence.

This is a substitute for the hull-mounted Heavy Bolters, which are removed to make space for the extra Vox net that facilitates the vehicle's primary role as a command node. Despite the lethality of this particular weapon configuration, the vehicle's main task is not to provide fire support, but to serve as a front-line command vehicle. This is especially appropriate, for the leaders of the Adeptus Astartes are every bit as much warriors as they are strategists, and their place is not behind the lines, but as the very leading edge of battle.

As a dedicated command transport, the Prometheus utilises an extensive array of communications and sensor equipment. All Land Raiders carry a tactical holosphere and squad status displays, but the Prometheus augments this with a long-range signals Amplex, a two-way signal booster, for squad-to-squad, ground-to-air and ground-to-orbit sensorium and Vox-communion.

The Prometheus has some features in common with the Damocles Command Rhino, a command variant of the Rhino armoured personnel carrier, and can serve as an Astartes strike force command and control hub if a Damocles is not deployed or is somehow disabled. It utilises secure multi-band communications for coordination with allied forces and transmission monitoring equipment for intercepting and de-crypting enemy comm signals, and also incorporates a multi-spectral ground surveillance Auspex for locating and tracking enemy forces.

The information provided by this array of sensors can then be shared with other Imperial forces as required. The advantage the Prometheus has over the Damocles Rhino as a command and control hub is that it is also a front-line combat vehicle. In battle it can lead from the front, and whilst a Prometheus does not contain all the advanced features of the dedicated command Rhino, it makes a peerless front-line command transport worthy of the most courageous and warlike leaders of the Adeptus Astartes.

The advanced targeting systems and additional communication systems take up some of the interior room within the vehicle, and as such the standard Land Raider's hull-mounted twin-linked Heavy Bolters are replaced. Additionally, the Land Raider Prometheus' transport capacity has been reduced compared to the standard pattern of the vehicle. The Prometheus is capable of transporting up to ten fully-armoured Space Marines or up to five Terminators. A Land Raider Prometheus is always equipped with a pintle-mounted Storm Bolter for added defence against enemy attack, but can also be outfitted with Extra Armour Plating, a Hunter-Killer Missile Launcher, a Pintle-mounted Multi-Melta, a Searchlight, and Smoke Launchers.

A Land Raider Prometheus is armed and equipped with:

A Land Raider Prometheus may take one of the following pintle-mounted weapons:

The Land Raider Prometheus may also have a variety of vehicle equipment such as: 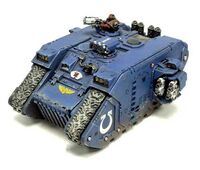 A Land Raider Prometheus of the Ultramarines Chapter, front-side view 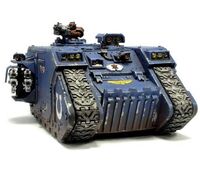 A Land Raider Prometheus of the Ultramarines Chapter, front-view 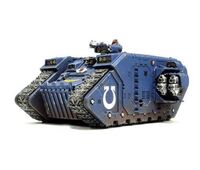 A Land Raider Prometheus of the Ultramarines Chapter, front-left view

A Land Raider Prometheus of the Dark Angels Chapter; this vehicle is part of their famous Deathwing (1st) Company

A Land Raider Prometheus of the Avenging Sons Chapter; this vehicle serves as a transport for their 1st Company Terminators

A Land Raider Prometheus of the Howling Griffons Chapter; this vehicle was used as a command unit during the Dennar IV Rebellion

A Macragge Pattern Land Raider Prometheus of the Minotaurs Chapter

A Land Raider Prometheus of the Raptors Chapter's 2nd Company

A Land Raider Prometheus of the Raven Guard Legion during the Horus Heresy
Add a photo to this gallery
Retrieved from "https://warhammer40k.fandom.com/wiki/Land_Raider_Prometheus?oldid=346282"
Community content is available under CC-BY-SA unless otherwise noted.