"The city must fall. Our Chapter's purity depends on it!."

The Land Raider Ares can use its Heavy Flamers to burn enemy infantry out of fortified bunkers, trenches, and tunnels. A siege can last for months, years, or even centuries and for the Space Marines, who are dedicated to the pursuit of lightning-fast planetary assaults that can conquer the enemy before they even know they are under attack, such slow-moving stalemates are completely unacceptable. It was to prevent such a situation from developing that the Land Raider Ares was created, and where it excels.

The main feature of the Land Raider Ares is its hull-mounted, forwards-firing Demolisher Cannon and Siege Shield, these features, taken from the Space Marine Vindicator siege tank, allow the Land Raider Ares to level enemy structures and bunkers quickly. The Demolisher Cannon is also capable of creating breaches in or even destroying enemy walls, allowing Space Marine and Imperial Guard infantry to enter.

The Land Raider Ares was developed by the Dark Angels Space Marine Chapter during a secret confrontation on the planet of Murun. This confrontation was initiated by the Deathwing (1st) Company's pursuit of the Fallen Angels, Dark Angels who had fallen to Chaos during the Horus Heresy nearly 10,000 standard years before. Due to the Dark Angels deep desire to keep the existence of the Fallen a secret, they often refuse the assistance of any other Imperial force, including the siege regiments of the Imperial Guard.

The Dark Angels had learned that three Fallen Angels had taken control of the world of Murun, and had taken to calling themselves "The Tribunal". The Fallen Angels fortified themselves in a fortress that was surrounded by a large city, and having anticipated an eventual confrontation with the Dark Angels, had fortified the city with weaponry that was made all the more powerful by their knowledge from ages past. The Force Commander of the Dark Angels who was leading the attack on the fortress had determined that the Chapter's Vindicator tanks would not be able to withstand the firepower the enemy defenders had at their disposal. The Force Commander turned to the Chapter's Techmarines to develop a solution, and after many weeks they developed a solution: a tank with the armour of the Land Raider and the power of the Vindicator's Demolisher Cannon. The Land Raider Ares lacks the transport capacity of the Land Raider, as the ammunition for the Demolisher Cannon takes up most of this space, and thus it is used in conjunction with other Land Raiders who troop-carrying capability remains intact.

The Techmarines of the Dark Angels created six Land Raider Ares tanks, and when the battle was over only one had been lost on its trip through the fortified city on its way to the fortress. Unfortunately the campaign on Murun proved a failure, as the Tribunal had escaped long before they were ever in danger, although the Land Raider Ares proved itself a success. In a move that was very unpopular with the Dark Angel's Inner Circle, the Master Techmarine submitted the details of the Ares Pattern to the Adeptus Mechanicus on Mars, but it has yet to be officially accepted as a viable variant of the Land Raider and thus is one of the rarest used by other Space Marine Chapters. There have been some cases in which other Chapters have acquired the plans for the Ares, and used them for specific situations where they will prove most formidable.

The Land Raider Ares is armed with two sponson-mounted twin-linked Heavy Flamers, one on each side of the vehicle. The Heavy Flamers are used by the Ares to burn enemy infantry out of cover, so that the Ares does not need to use its more limited amount of Demolisher Cannon shells to destroy small targets.

The Ares is also equipped with a hull-mounted twin-linked Assault Cannon and a Demolisher Cannon. The Assault Cannon is capable of unleashing a powerful stream of high-velocity shells that are able to tear enemy infantry to shreds, while the Demolisher Cannon fires massive, rocket-propelled shells that are capable of leveling entire buildings in one shot.

The Land Raider Ares, like all Land Raiders, also possesses a very powerful Machine Spirit (Artificial Intelligence), which is capable of taking control of the vehicle and its weapons if the crew is killed or otherwise unable to operate the vehicle. The Land Raider Ares can be outfitted with additional enhancements such as a Dozer Blade, Extra Armour Plating, a Hunter-Killer Missile Launcher, a pintle-mounted Storm Bolter, a Searchlight, and Smoke Launchers. 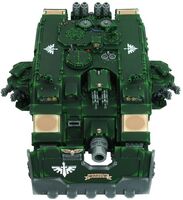 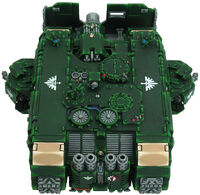 A Land Raider Ares of the Dark Angels Space Marine Chapter, rear dorsal view
Add a photo to this gallery
Retrieved from "https://warhammer40k.fandom.com/wiki/Land_Raider_Ares?oldid=346284"
Community content is available under CC-BY-SA unless otherwise noted.