"For those we cherish, we die in Glory!"

— Excerpt from the Libris Malefica

The Lamenters are an unfortunate Loyalist Chapter of Space Marines who perhaps more than any other Chapter of the present era seem to have been cursed by a dark shadow that has long determined their fate. The Lamenters' accursed and haunted legacy seems to have tainted much of what they have achieved and their victories often become bitter ashes in their hands. They found themselves on the wrong side during the Badab War and were thereafter devastated by the Tyranids. The Lamenters are a Successor Chapter of the Blood Angels created during the Cursed 21st Founding, and seem to have eliminated the gene-seed Flaws known as the Black Rage and the Red Thirst through unknown means, but this secret cure may have been lost along with the Chapter.

The Lamenters were created during the Cursed 21st Founding of Space Marine Chapters in the early 36th Millennium. The matter of the "curse" pertaining to the exact nature of this Founding has long since become shrouded in secrecy and myth. The various dark ends that have befallen many of this Founding's Chapters have entered it into the lore of the Inquisition and the Adeptus Astartes alike. Many consider those Chapters created under the auspices of the "Cursed Founding" as tainted from their very creation. The Lamenters are believed to have been created from the Blood Angels' gene-seed, genetically modified by the Adeptus Mechanicus' Tech-priests on Mars to remove the effects of the Blood Angels Flaws known as the Black Rage and Red Thirst. However, the Astartes of the Lamenters Chapter are noted to suffer from a kind of mental melancholy, although it is unclear if this is due to some unexpected Flaw in their gene-seed or if it is simply the result of the unfortunate events that have repeatedly befallen the Chapter. Although the Chapter numbered those few Astartes descended from Sanguinius to be spared an ultimate devolution into something no longer human or sane, the mark of the Flaw was still upon the Lamenters in the eyes of their fellow Space Marines, many of whom chose to shun the Chapter, regardless of their undoubted loyalty to the Emperor of Mankind and his Imperium and their noble efforts in defence of its people.

During the early 37th Millennium, matters worsened for the Imperium as corrupted Astartes of the 21st Founding and other dissident forces rose up against the rule of the Emperor in a series of bloody wars and purges. The Lamenters chose to depart to the Imperium's fringes rather than risk internecine conflict with their fellow Astartes of the 21st Founding. They used their mobility as a Fleet-based Chapter to crusade against the enemy without, rather than become ensnared in the quagmire of civil conflicts within the Imperium.

For the next millennium and a half, the Lamenters would remain on a continuous Crusade, conducting many campaigns against the various xenos races that plagued Mankind across the western reaches of the galaxy. Often the Chapter was recorded as intervening to aid isolated Imperial worlds under threat. Despite their enviable record of honourable victories and valiant defence of the Imperium's far-flung domains, the spectre of misfortune seemed to dog them at every turn. Dark rumours began to grow up to surround them as time and again the Chapter suffered from bitter reversals and dark turns of fate. Even when they were recalled into the interior of the Imperium along with a number of other crusading Chapters by the High Lords of Terra in the 39th Millennium to help deal with the rising threat of incursions from the Eye of Terror, many Imperial Commanders and other Space Marine Chapters continued to view them with suspicion.

Their reputation worked against the Lamenters often, but rarely with such consequences as during the Chaos attack on the Hive World of Corillia during the 9th Black Crusade. The superstition-bound Mortifactors Chapter refused to fight alongside the Lamenters, abandoning the planet rather than serving beside them. The Lamenters were unwilling to desert the Corillian population, holding out alone against the war bands of the Black Legion for six weeks, suffering horrendous losses until the Ultramarines and White Scars led a battle group that broke through the Chaos fleet blockade to relieve Corillia. The Lamenters Chapter had been reduced to barely two hundred surviving Astartes by the time they were relieved by their fellow Space Marines. The Lamenters were deemed lost when their fleet disappeared into a Warp Storm soon afterwards, only to reappear more than a century later on the edge of the Segmentum Solar having slowly battled their way back from the outer void.

Once again, the Lamenters returned to full strength after slowly rebuilding their fleet and Chapter ranks. They now operated as a crusade force near the galactic core, and were soon requested by the High Lords of Terra to form part of the defences of the sorely pressed Maelstrom Zone in 587.M41 as one of the Chapters that served as Maelstrom Warders. Their duties were to patrol the wide expanse of the desolate wastes of the Maelstrom's western zones, responding to and neutralizing Chaotic and piratical threats as they were encountered, a duty the Chapter took to with great fervour. During this time, the Lamenters became close allies with the Astral Claws who held the strategic command of the Maelstrom Zone, and fought alongside them in may of their greatest battles. The Astral Claws Chapter, under its last Chapter Master, Lufgt Huron, offered the Lamenters a degree of honour and respect they had seldom received before from their fellow Astartes, as well as war materiel with which to build and maintain the Chapter's strength. It would be this unaccustomed friendship and the ties of blood spilt in battle alongside the Astral Claws that would ultimately prove to be the Chapter's undoing.

The Lamenters remain at their heart a Blood Angels Successor Chapter, heir to the glorious and unique martial traditions and brutally effective art of war practiced by the Sons of Sanguinius. They adhere to the basic tenets of the Codex Astartes with a notional strength of 10 companies each comprising 100 Astartes, with the usual division of one Veteran Company, one Scout Company, 4 Battle Companies, 1 Tactical Reserve, 1 Assault Reserve and 1 Devastator Reserve Company. However, like all their fellow Scions of Sanguinius, there is a very great deal of fluidity between the companies and they very rarely fight in full cohesion, save the 10th Scout Company whose members have yet to complete their training and become full Astartes. Instead, the Lamenters employ strike forces which are created as needed from across all the units of the Chapter, giving them a high degree of flexibility in shaping their forces to meet operational needs. Chapter recruitment was also carried out on a practical basis, with likely Aspirants culled from feudal worlds and far-flung colonies from wherever the Chapter fleet's roving course took it. The Lamenters' order of battle favours shock assault tactics, often delivered through a close air assault utilising the Chapter's Thunderhawk and Stormraven gunships.

In terms of operational equipment and insignia, the Lamenters cleave more to the standard panoply of the Space Marines than their Blood Angels forebears and their fellow Blood Angels Second Founding Successor Chapters, although this may be a matter more of ease of resupply and maintenance for a fleet-based Chapter with no home port that is forced to rely largely on its own Artificers. The Chapter does retain a few cherished examples of Sanguinary relics, but aside from their large number of air units, heavy tanks such as Land Raiders and Baal Pattern Predators are less common with the Lamenters than any of the other Blood Angels Successors, while suits of Terminator Armour are particularly rare in the Lamenters' Armoury and are valued beyond price by the Chapter.

As with their progenitors, the Lamenters' Chaplains operate as part of their overall Chapter command rather than subordinate to it in each company as is the case with most Codex-compliant Chapters. This enables the Chaplains to watch for the growing problem of the Red Thirst in the Chapter's ranks, while the Sanguinary Priesthood (the Chapter's Apothecaries) holds a particularly prominent role and is know by the Lamenters as the Calix. It has often been observed that it is the Calix that has had the greatest part in holding the Chapter together through its many trials and misfortunes, as the Apothecaries of the Lamenters tend not only to the physical health of the Chapter's Astartes but also the spiritual stigmata they bear.

It appears that the Lamenters' gene-seed may have been tampered with during their creation process by the Adeptus Mechanicus. The full extent of the modifications performed during its creation on Mars were likely kept concealed even from the High Lords of Terra and other Adeptus Astartes Chapter Masters of the day, a theory easily given weight by the political turmoil and division that was rife throughout the Imperium during the early 36th Millennium. It is also likely that the experimental procedures performed on the Lamenters' gene-seed during its creation were done with at least their progenitor Chapter's tacit approval. The Blood Angels have long sought an answer to their dual afflictions of the Red Thirst and the Black Rage. The goal of reducing the effects of the Flaw were at least partly successful, with such record as remain concerning the 21st Founding showing that the number of the Lamenters Chapter's Astartes succumbing to the Red Thirst over the centuries was very few.

However, it was quickly noted that certain idiosyncrasies of mind and temperament developed within the Lamenters, factors that only grew more pronounced as the years passed: a dark melancholia seemed to take hold of the Chapter's soul and it was said amongst their fellow Scions of Sanguinius that the Lamenters bore the grief of their Primarch's death more keenly than any other of the other Blood Angels Successor Chapters. Whatever the truth of this, ill-fortune had already begun to follow the Lamenters like an unwanted shadow. As the years passed, there has been a continued and observable increase both in the Lamenters' predilection for melancholia and in the frequency which with the Red Thirst affects Lamenters' Astartes. By some reports the Blood Angels Flaws have been worsening to varying degrees in all of the Blood Angels Successor Chapters over time. It remains to be seen whether the Lamenters will survive long enough to begin recruiting new Neophytes to replace their steep losses to Hive Fleet Kraken.

At the outset of the Badab War the Lamenters were known to possess the massive mobile star fortress called the Mater Lachrymarum which served as their Chapter's mobile fortress-monastery and repair dock, two Adeptus Mechanicus Forge Ships and a dozen other support vessels. The Chapter also possessed 2 unusually powerful Battle Barges, 6 Strike Cruisers and 3 Vanguard-class Cruisers as well as 22 Escorts of various classes. The Lamenters' current fleet disposition after being engaged by Hive Fleet Kraken is unknown at this time.

The Power Armour of the Lamenters was originally bright yellow except for a red helmet stripe and the right shoulder plate, which was decorated with white and black checks, upon which rested the Chapter's badge: a bleeding heart. The most recent Chapter colours includes a Mark VII Aquila pattern Power Armour scheme that darkens the Lamenters' armour to a mustard yellow, and transfers the Chapter badge (and the checked pattern) to the left shoulder plate. The helmet stripe was dropped completely.

The Lamenters' Chapter badge is a bleeding heart against the background of a black-and-white checkerboard pattern. 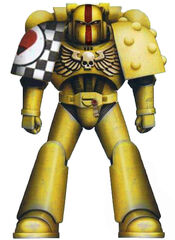 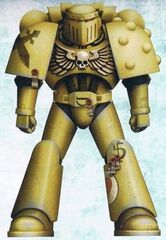 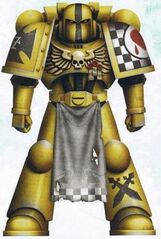 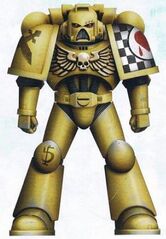 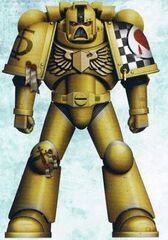 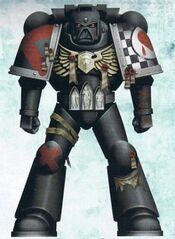 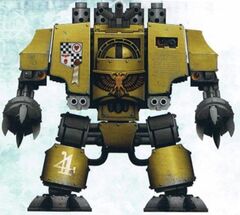 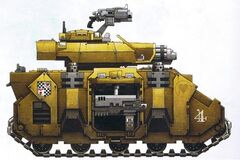 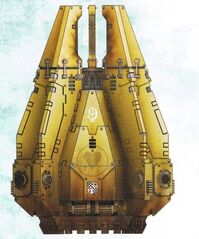