The Krios Venator, also known as the Krios Venator Tank Destroyer, was a tank destroyer variant of the standard Krios Battle Tank that was used by the Mechanicum of Mars during the Great Crusade and Horus Heresy.

The Krios was developed on Mars during the earliest days of the Mechanicum and uses numerous arcane integrated systems that are well outside the purview of most Standard Template Construct (STC) construction facilities to build or maintain. Due to the difficulty to build and maintain these vehicles the Krios and its variants have never seen service outside the Taghmata and Skitarius.

The Krios Venator is comparable in function and tactical role to the Predator main battle tank that is used by other Imperial forces. Although the Krios lacks the more flexible traversable turret for its main weapon, the Krios makes up for this disadvantage with its greater speed and maneuverability.

In marked contrast to more conventional Imperial armoured vehicles, the Krios Pattern does not make use of layers of physical armour plating for protection and instead relies on a series of interlocking defensive energy fields, lending it a deceptively skeletal appearance. The Krios Venator also makes use of a galvanic traction drive that allows the vehicle to traverse dangerous terrain with relative ease. The most important feature of the Krios Pattern is its extremely potent on-board fusion reactor. This powerful reactor not only powers the vehicle's protective energy fields, but also its powerful directed energy weapon systems.

The Krios Venator is armed with a hull-mouted, forwards-firing Pulsar-fusil. The Pulsar-fusil is a multi-chambered particle beam cannon designed to fire volleys of destructive energy bolts that detonate explosively upon impact. The Krios Venator is a purpose-designed tank destroyer as repeated strikes from its weapon hammer armoured vehicles into pieces. The Krios Venator can be outfitted with several upgrades and attachments, including Extra Armour Plating, Smoke Launchers, an Anbaric Claw, and up to two Volkite Sentinels.

The following are all known formations used by the Krios Venator:

The technical specifications of the Krios Venator are a guarded secret of the Martian Priesthood and as such the Adeptus Mechanicus has not made its specifications public. 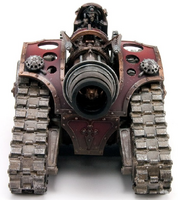 A Krios Venator as seen from the front

A Krios Venator as seen from the left side

A Krios Venator as seen from the rear
Add a photo to this gallery
Retrieved from "https://warhammer40k.fandom.com/wiki/Krios_Venator?oldid=334042"
Community content is available under CC-BY-SA unless otherwise noted.