— An Ork Kommando explaining "da sneaky plan" to a group of other Orks.

A Kommando (pl. Kommandoz) is an Ork Boy specialist who prefers to rely on "kunning trikz" instead of fighting his opponents head-on like most other Greenskins.

Kommandoz serve as the Orks' infiltrators and saboteurs, and are masters of the arts of stealth, ambush, unconventional tactics and striking at the opponent from a totally unexpected quarter.

Unlike Boyz, these Orks use dirty tricks like stealth, camouflage, and creating distractions. Such methods rely on a trait lacking amongst Orks -- discipline. Though Kommandos exist in all Ork clans, other Orks tend to distrust them.

Most consider the use of stealth and camouflage distinctly un-Orky, as killing the enemy before they get to fight defeats the point entirely. Though Warbosses instinctively understand a Kommando’s tactics, most are deeply uncomfortable in the presence of any Ork that would voluntarily stay quiet.

The aberrant mindset that distinguishes each Kommando serves the entire tribe; just as the average Ork is driven above all to fight, a Kommando finds the highest pleasure in covert operations. Sneaking through an enemy base to slaughter surprised enemies, patiently waiting to strike to make an ambush more successful, utilising timed explosives to cripple supply lines; all epitomise Mork's battle "taktiks."

Some Kommandos range so far ahead of the tribe that they find themselves deep behind enemy lines -- so deep they are forgotten, continuing long campaigns without orders, executing stealth missions purely for pleasure.

"Listen! I’s sneaky, yous sneaky, and Deftoof is sneaky too. If we all sneakin togetha, dats triple the sneak! Now, help me get dis muffler Squig on dis ere Rokkit Launcha."

The life of an Ork is a life of constant warfare, and luckily for the other inhabitants of the Milky Way Galaxy, Orks spend most of their time fighting amongst themselves, with battle devolving into massive bouts of close-quarters fighting. To an Ork, the best fighting is always up close and personal, and usually involves chopping his opponent to bits.

Ork Kommandoz are those rare Greenskins who disdain this cornerstone of Ork "kultur". A Kommando epitomises the Ork virtue of low cunning. Nothing makes a Kommando happier than creeping up on an unsuspecting enemy, his fellow Kommandoz slithering through the undergrowth at his side. When the time is right, the Kommandoz will burst from their concealment, slashing, stabbing and shooting their stunned prey before they have a chance to strike back.

Ork Kommandoz are those rare Boyz who have been "touched by Mork", and emulate that Orkish god's tendency towards "kunning" (i.e. resorting to dirty tricks) first and open combat second. Unlike the average Ork Boy who enjoys loud weapons, big explosions and fast vehicles, Kommandoz prefer spreading panic behind enemy lines before launching a perfectly timed ambush. Kommandoz put on camouflage and make use of cover, and favour stealth, espionage, guerrilla warfare, and other unconventional methods to kill their foes.

Their favoured modus operandi is creeping up on an unsuspecting enemy, and when the time is right, bursting from their concealment, slashing, stabbing and shooting their stunned prey before they have a chance to strike back. On the field of battle, Kommandoz will assassinate enemy sentries, destroy gun emplacements, blow up fuel depots and ammunition stacks and generally do as much damage as they can in an opponent's vulnerable rear area.

A rarity amongst the usually simplistic and simple-minded Orks, Kommandoz prize intelligence and initiative, as well as base cunning and a hunter's instinct. Kommandoz also value reconnaissance and planning ahead, and the Inquisition's Ordo Xenos has been horrified to recieve certified reports of Ork Kommandoz being able to both speak and even read Low Gothic.

Although the methods used by the Kommandoz are crude by all other sentient races' standards, they are often efficient enough to wreak major havoc, for few of the Orks' opponents ever consider that Greenskins will come up with anything other than a full-on frontal assault as a battle plan. The horrified look on the faces of their prey, who assumed they would be able to see the Ork attack a kilometre off, is tremendously rewarding to the members of a Kommando mob.

Kommandoz are most often found among members of the Orks' Blood Axes klan who also prize planning and cunning due to their prolonged cultural contact with Imperial humans. Kommandoz are viewed with suspicion and looked down upon by most of Orkish society, who overwhelmingly believe that "dat sneaky stuff ain't Orky!" Most Orks consider the idea of hiding from a fight or silently creeping through cover a waste of time, if not downright cowardly.

What they don't understand is that Kommandoz like a good fight just as much as the next Ork, only they know how to get in close without getting shot in the face. There is no greater pleasure for a Kommando than making a good surprise attack, that split second as horror spreads across their victim's face worth all those solar hours of crawling through the mud.

Kommando small-unit specialists do not usually socialise with other Orks, and sometimes exile themselves from their warband, tribe or klan for solar months at a time, or even permanently in extreme circumstances. Yet no Warboss in his right mind would refuse their services, for their methods of stealth combat give "da 'uvva boyz" a better chance of reaching the enemy lines unscathed.

It is common for each Kommando to have a specialist role within the mob, and to possess a nickname appropriate to his role, such as "Fireboy" or "Throatslit". Their unusually organised and militaristic outlook for Orks means that young Stormboyz often develop into Kommandoz instead of rejoining the "right-thinking" Ork Boyz at the heart of each tribe.

The Kommandoz prize intelligence and initiative, and some of them are even able to read other languages, as noted above -- this in itself should reveal just how different the Orks who serve as Kommandoz are from their fellows. Not for them the thrill of a massed charge or a turbo-powered race to the front line in a badly-made Trukk. Instead, a Kommando gets his enjoyment from slitting throats and spreading panic behind enemy lines before launching a perfectly timed ambush. These scare tactics are epitomised by Snikrot of the Red Skull Kommandoz, whose name is now a byword for terror on Armageddon.

The tools of the Kommando trade are unusually subtle by Ork standards. Kommandoz use soot-blackened blades and camouflage-style warpaint, painting their skin with stripes of blood, dirt and dung so that they blend in with their surroundings. Some Kommandoz are even more inventive with their camouflage, attaching foliage to their uniforms or even employing "kunning" disguises. Common Kommandoz equip themselves with a good Slugga, a better Choppa and Stikkbombz.

A couple of Kommandoz will sometimes carry around a heavier weapon, be it a Big Shoota, Burna or Rokkit Launcha, granting the Kommando mob some firepower to deal with unexpected resistance and/or vehicles. The Kommandoz' Nob will have his own personalised wargear, with many Kommando Nobz favoring a Power Klaw that allows them to rip open a way through a wall or a vehicle's blindage quickly. All Kommandoz eschew any form of armour heavier than simple hide jackets, however, as such heavy and cumbersome protection would be far too ungainly and noisy to infiltrate successfully.

A pair of Ork Kommandos.

Boss Snikrot leads his Red Skull Kommandos on a raid.

A warband of Ork Kommandoz outfitted with respirators for toxic environment operations. 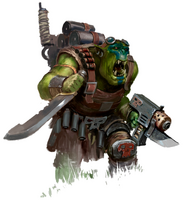 An Ork Kommando known as a Flashblade that belongs to Dazkrit's Killaz. 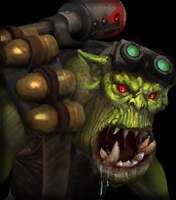 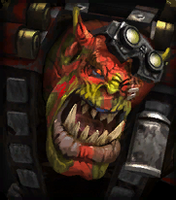 An Ork Kommando Nob wearing striped camouflage.
Add a photo to this gallery
Retrieved from "https://warhammer40k.fandom.com/wiki/Kommando?oldid=367839"
Community content is available under CC-BY-SA unless otherwise noted.