Knights of the Raven

Knights of the Raven

Unknown (last half of the 38th Millennium)

The Knights of the Raven is a Loyalist Codex Astartes-compliant Space Marine Chapter raised during an unknown Founding some time in the latter half of the 38th Millennium. They are a Successor Chapter of the Raven Guard.

Very few details of the Knights of the Raven Chapter are known to the wider Imperium, even within the ranks of the Adeptus Astartes, the Deathwatch, and the Holy Ordos of the Inquisition.

When they fight alongside other Imperial forces they communicate only when necessary, and use their own cryptic battle tongue amongst themselves.

The Chapter's homeworld and fortress-monastery is located on the Feudal World of Coralax.

In recent history, for unknown reasons, the Knights of the Raven "came to blows" with Astartes from the Aurora Chapter; the resulting conflict was apparently ended by Marneus Calgar of the Ultramarines.

In penance for shedding the blood of fellow Astartes, they are currently fighting a guerrilla war against the Tyranids of the remaining splinters of Hive Fleet Kraken.

Over the millennia, the Adeptus Terra has seen fit to found fewer and fewer Successor Chapters from the Raven Guard's limited genetic material as the gene-seed has continued its gradual deterioration.

However, in the short time since their birth, the Knights of the Raven have already proven their valour in hundreds of bloody engagements across many war zones.

They appear to their awed populace only once every thirteen Terran years, when their emissaries descend from the heavens to spirit away the victors from the blood-tourneys held in their honour.

In 744.M41, after joining forces to defeat the Alpha Legion warband responsible for the Redemption Rebellion, the Knights of the Raven and the Aurora Chapter swore a bitter feud against each other, each blaming the other for their grievous losses.

This conflict was only ended by the intervention of Ultramarines Chapter Master Marneus Calgar himself. In penance for shedding the blood of fellow Astartes, they are currently fighting a guerrilla war against the Tyranids of the remaining splinters of Hive Fleet Kraken.

A small number of Knights of the Raven battle-brothers have since taken the Apocryphon Oath and begun a vigil of the Long Watch. As with the deployment of the Chapter's main force in the Jericho Reach, it appears this undertaking is a matter of honour, ensuring the Chapter bears its fair share of the trials and tribulations of the Achilus Crusade.

This handful of battle-brothers have not long been serving at Watch Fortress Erioch, and it remains to be seen if their deeds will equal, or even surpass those of other, better known Chapters.

Notable Knights of the Raven

The Knights of the Raven's power armour is painted burnished silver with black trim, Aquila, and markings.

The colour of the left knee plate indicates to which company an Astartes belongs.

The squad specialty symbol -- battleline, close support, fire support, Veteran or command -- is indicated on the right shoulder plate, with the Low Gothic squad number centred in the middle of it.

The Knights of the Raven's Chapter badge is a stylised, black raven, identical in aspect to the Raven Guard's own badge, centred on a field of silver. 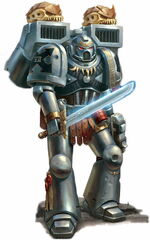