The Knights of Blood are a currently Renegade Space Marines Chapter who were declared Renegades and Excommunicate Traitoris by the High Lords of Terra on the advice of the Inquisition because of the terrible destruction they wrought against friends and foes alike, yet the Knights of Blood still consider themselves to be loyal to the Emperor of Mankind, if not to his Imperium. The Knights of Blood are a Successor Chapter of the Blood Angels, created during an unknown Founding.

Following the declaration, the Knights of Blood largely disappeared from the records of the Imperium. Nonetheless, the Knights of Blood refused to be deterred by this edict, and they continue their galactic Crusade, purging the Emperor's foes from the worlds of the Imperium of Man. They have been noted on several occasions to have intervened to aid beleaguered Imperial forces, though they are unwelcome allies at best, arriving unannounced (and often unwanted) to lend their considerable might to a conflict or war. However, only the most desperate worlds accept their aid, for to do so runs the risk of an investigation by the Inquisition. Imperial commanders are especially loathe to accept their assistance, due to the Knights' reputation for carnage and the inherent dangers of fighting alongside these near-crazed Astartes. The Knights of Blood keep their distance from those they are ostensibly allied with, a fact that protects such forces from censure as well as the collateral damage often associated with the more extreme Blood Angels Successor Chapters. Nevertheless, the Knights of Blood are driven to continue to battle the enemies of Mankind across the galaxy.

Though originally compliant with the dictates of the Codex Astartes, the Knights of Blood have been ravaged by the genetic flaws of their ancestral gene-seed. Though the Chapter once tried to adhere to the Codex, adjustments to the structure of their battle-companies were necessitated by their depleted numbers. Due to their predilection for close-combat, most if not all of the Knights of Blood prefer to deploy as dedicated assault troops instead of in a tactical role like most Codex-compliant Chapters.

The Knights of Blood are considered by the military forces of the Imperium to be the epitome of a dedicated assault force. Those who have actually witnessed them in action report a Chapter consumed by savage butchery and carnage on an unparalleled scale. A Knights of Blood force in combat seeks nothing more than to come to grips with an enemy in close combat so they can rend them apart in a hail of blood with Chainswords and Power Fists and, if need be, their bare hands and teeth. As the Knights of Blood's barely controlled blood lust rises in battle, heavy weapons and armoured vehicles are eschewed so that these Astartes can rush forward to destroy their enemies in close combat. It is assumed that the Chapter has extremely limited vehicle resources which more often tend to be used as transports, since the Knights of Blood prefer to surge forwards and take the enemy with Bolt Pistols and melee weapons. Once unleashed, these bloody-handed Sons of Sanguinius will permit nothing to stand between themselves and the gratification they can only find in close combat. There have been many documented occasions when allied forces have found themselves the victims of the Knights of Blood's unrestrained savagery in combat. The Knights of Blood remain unrepentant to this day regarding these supposed incidents of fratricide. The reported carnage that usually followed a Knights of Blood engagement earned them the enmity of many an Imperial commander as well as of their fellow Astartes Chapters. This growing political wrath from many corners of the Imperium resulted in their continuing censure by the Inquisition and their ultimate status as Renegades following a decision of the High Lords of Terra arranged by the Chapter's many powerful political enemies.

Created as they were from the Blood Angels' gene-seed, like their fellow Chapters who share the heritage of Sanguinius, the Knights of Blood also carry the Blood Angels' Flaw within their genetic make-ups. The Chapters most strongly affected by the Flaw are those Successor Chapters of the Blood Angels founded in later centuries, at times when the Blood Angels Chapter Council had thought the Flaw eradicated from its remaining gene-stocks. In reality, the Flaw has merely degenerated into new and even more worrying forms and so the Battle-Brothers of those Chapters founded in more recent times do not suffer slight lapses of control, but teeter on the border of full-blown insanity when the Black Rage and the Red Thirst manifest themselves. The Knights of Blood appear to be one such Chapter, which may have contributed greatly to all their problems.

The Knights of Blood have a two-tone colour scheme with dark red covering the helmet, shoulder pauldrons, Aquila, and part of the backpack, whilst their torso, arms, legs and backpack exhausts are silver in colour. Like the Blood Angels, the Knights of Blood's company designation is displayed on the right shoulder plate in the form of a skull (for the Veteran 1st Company) or a different-coloured blood drop for their other companies. A Knights of Blood's squad designation is determined by symbols commonly used by the Blood Angels and their Successor Chapters and placed on the right knee plate.

The Knights of Blood's Chapter badge is a white shield with a red blood drop at its center, with two crossed black swords behind it. 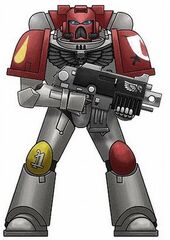 A Knights of Blood Tactical Marine 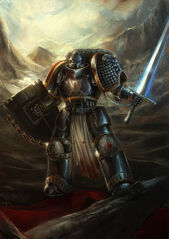 A Knights of Blood Battle-Brother seconded to the Deathwatch before they were branded as Renegades
Community content is available under CC-BY-SA unless otherwise noted.
FandomShop Newsletter Join Fan Lab