The Knight Warden is a pattern of Questoris-class Imperial Knight that excels at storming strongholds and battles in claustrophobic confines like urban areas. Undaunted in the face of enemy fire, they often mastermind attacks on enemy barricades and bunkers. With its Ion Shield to the fore, the Knight Warden can close upon a foe quickly, its immense strides simply bypassing tank barricades and easily manoeuvering through narrow hive city streets, a manufactorum or amidst the twisted boughs of alien forests.

On one arm they carry an Avenger Gatling Cannon; on the other a Reaper Chainsword or Thunderstrike Gauntlet, both more than capable of ripping a tank, monstrous alien creature or armoured fortification to pieces. The Knight Warden can be further equipped with a shoulder-mounted Meltagun and carapace-mounted support weapon. Should the Warden expect to encounter enemy tanks, the Stormspear Rocket Pod is the ideal solution, while the twin Icarus Autocannons are perfect for dealing with aircraft.

This combination of weapons renders them especially ferocious when engaging the enemy's war engines and monstrous beasts; with every swing, the Reaper Chainsword is more than capable of scything the head from a Tyranid bio-horror or running through the heaviest T'au Empire Battlesuit. Meanwhile, a single good punch is all the Thunderstrike Gauntlet needs to kill almost anything smaller than a Titan, annihilating it in a searing flare and resonant boom.

In battle, the Avenger Gatling Cannon hisses as it whirs, spitting out a wall of shots -- a high volume of large calibre shells that can tear apart armour and mow down squads of infantry. A Heavy Stubber adds to the firepower while a Heavy Flamer built into the main gun's shield ensures that even foes in cover cannot escape the Knight Warden's wrath. When the Knight reaches its destination, the mighty close combat weapon on its other arm can rip apart or crush any enemy foolish enough to have stood before its oncoming doom.

For forces of the Imperium pinned down by enemy infantry, there is only one sound more reassuring than the heavy thudding footfall of an oncoming Imperial Knight. The whirring drone of the high velocity Avenger Gatling Cannon sounds a distinctive message, as do the telltale cracking explosions of its rapidly fired shots. Such noises let friend and foe alike know a Knight Warden has arrived. The highly feared Avenger Gatling Cannon is like an oversized Assault Cannon, though its larger calibre shells are more destructive and its rate of fire is even more prodigious. A single blazing volley from this rotary weapon can stitch a pattern of death across the foe's battle lines, causing charges to falter and fail or destroying entire attack columns of light vehicles. In support of this already lethal weapon, the Avenger Gatling Cannon has a built-in Heavy Flamer to flush foes out of cover.

Any enemies that get through the curtain of deadly fire laid down by a Knight Warden must then seek to avoid the wide-sweeping blows of its signature close combat weapon, the Reaper Chainsword. This massive chain-toothed blade is typically used to destroy the largest of targets, slicing apart battle tanks or delivering the killing blow to Titan-class foes. It is this combination of mid-ranged firepower and close assault capability that makes the Knight Warden such a formidable adversary and so popular amongst its allies.

It is not uncommon for some Knights Warden to bear a Thunderstrike Gauntlet in lieu of the murderous Reaper Chainsword, using the energy-crackling power of its prodigious blows to hammer apart even the mightiest of foes. The "Avenger Lance" formation made famous by House Terryn has been known to feature a trio of Knights Warden armed in such fashion, and House Vulker employs several similar lances for bunker-busting besiegements.

Upon realising that they cannot match the might of an Imperial Knight, many of Mankind's enemies will attempt to overrun the war engine with weight of numbers, or probe around their more vulnerable flanks. It is against tactics such as these that the Warden truly comes into its own, thanks to the volume of firepower it carries.

Should fast foes such as T'au Piranhas or Ork buggies streak around a Knight formation's flanks, seeking to compromise the walkers' Ion Shields, they will find a Knight Warden a formidable obstacle. Tracking the oncoming foe, the Knight Warden will fire short bursts from its Avenger, quickly and efficiently turning such light armoured vehicles into burning wreckage.

The original incarnation of the Knight Warden was provided in the supplement found in White Dwarf 126, UK edition. This account of the Knight Warden's history has largely been superseded by newer canon in accordance with Codex: Imperial Knights (7th Edition). Please note that the older background information is no longer considered canon according to the current iteration of the Warhammer 40,000 universe.

A Knight Warden of House Terryn in battle. 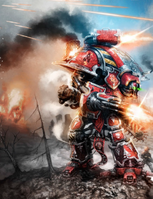 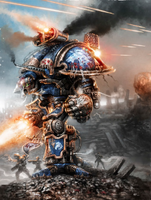 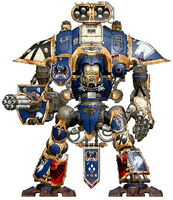 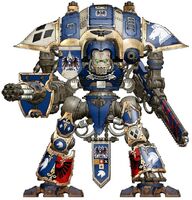 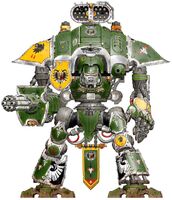 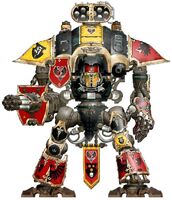 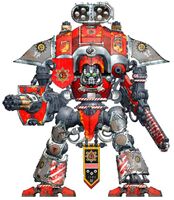 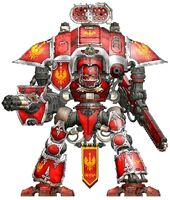 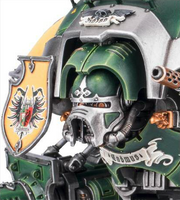 Ever vigilant, a Knight Warden of House Cadmus defends an Imperial cathedrum. 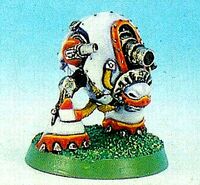 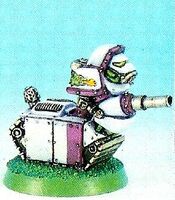 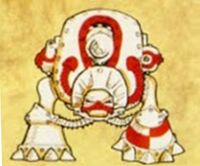 A Warden of House Warwick (1st Edition era)
Add a photo to this gallery
Retrieved from "https://warhammer40k.fandom.com/wiki/Knight_Warden?oldid=345496"
Community content is available under CC-BY-SA unless otherwise noted.