The Knight Valiant is a super-heavy Imperial Knight that makes use of the Dominus-class chassis and possesses a dual plasma core to empower its myriad weapon systems. It is used primarily as a close-combat assault walker. Although slower than other Knights, this pattern benefits from substantially increased firepower and much thicker armour than its smaller counterparts.

The Knight Valiant defeats its enemies through the simple principle of applying overwhelming firepower at close proximity. Marching relentlessly into the fight, gunfire scattering uselessly from its Ion Shield, the Valiant unleashes such devastating punishment against its targets in so short a space of time that they can neither fight back nor endure.

Even a single Knight Valiant can break the back of an onrushing enemy horde, or shatter the centre of the foe's battle line like a battering ram smashing through a castle gate. When an entire lance of these fearsome war engines strides into battle, they can snap apart an enemy army like matchwood.

The Knight Valiant's primary armaments are its Conflagration Cannon and Thundercoil Harpoon. The former is a magnificently unsubtle weapon, comprising three enormous, Knight-grade Flamers linked together and fed from armoured promethium reservoirs. When triggered, the Conflagration Cannon spews forth an inescapable firestorm that washes over everything in range and reduces all to blackened ash. So does the Knight Valiant burn the Emperor's enemies as the worthless Heretics they are.

The Thundercoil Harpoon is a rather more unusual weapon: a huge spear of adamantium fitted with pneumatic grapnels and attached by thick chains to an electrothaumic generator, allowing it to be fired then reeled back in time and again. Not only does its impaling mass gouge massive wounds in larger targets while crushing smaller victims outright, but once the harpoon has hit home, the Noble pilot can trigger their generator and send a massive electrical charge through the chain. Arcing electrogheists leap from the harpoon, cooking monstrous beasts from the inside out and overloading the circuitry and power supplies of enemy war engines.

Combined with the pummelling fire of its twin-linked Siegebreaker Cannons and the inescapable detonations of its Shieldbreaker Missiles, it is not hard to see how many enemy forces soon disintegrate when the Valiant turns its wrath upon them. Those few who hold their ground often earn a salute of respect from the Knight Valiant's pilot before its next bombardment annihilates them utterly.

The technical specifications of the Knight Valiant have not been publicly released by the Adeptus Mechanicus. 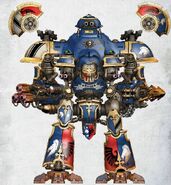 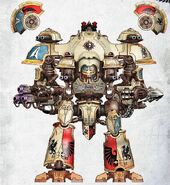 The Knight Valiant Bane of Iron, piloted by Lady Natanya of House Griffith. 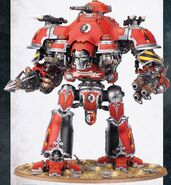 A Knight Valiant of House Raven, Divine Retribution is piloted by Sir Galen. It is equipped with Shieldbreaker Missiles and a twin-linked Siegebreaker Cannon. The Cog Mechanicum on the chassis indicates House Raven's proud allegiance to the Adeptus Mechanicus of Mars.
Add a photo to this gallery
Retrieved from "https://warhammer40k.fandom.com/wiki/Knight_Valiant?oldid=329550"
Community content is available under CC-BY-SA unless otherwise noted.