Note: This article discusses material that was once considered canon but whose canonicity is now superceded.

A Knight Lancer is a variant of the standard Imperial Knight suit that has been designed for speed and agility. The Knight Lancer is most usually used to perform scouting actions, outflank enemy forces and distract them while heavier units can position themselves to attack.

The Knight Lancer is equipped with a Battle Cannon to give it ranged combat capabilities, but its true armament is the Power Lance. The Power Lance is a relatively simple upgrade to the standard Shock Lance that is mounted on other Knight patterns. It operates by intensifying the bolt of energy normally expelled from Shock Lances, changing it into a searing arc of lightning capable of rending all but the strongest of armour plating and causing havoc in enemy ranks. The Power Lance has a very short range, but its nature makes it the perfect weapon for hit-and-run attacks. 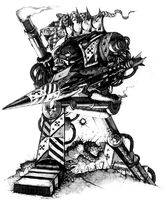 A depiction of a Knight Lancer (Rogue Trader era) 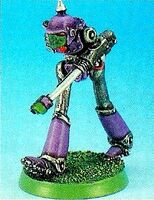 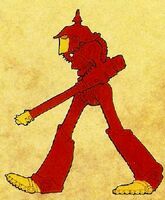 A pair of House Mortimer Squires
Add a photo to this gallery
Retrieved from "https://warhammer40k.fandom.com/wiki/Knight_Lancer?oldid=329844"
Community content is available under CC-BY-SA unless otherwise noted.