The Knight Crusader pattern of Imperial Knight is a Questoris-class Knight that serves as a mobile fire support platform and provides heavy weapon support for its fellow Knights in battle. The Crusader strides forward relentlessly, blasting away with not one, but two main guns. With an Avenger Gatling Cannon and another Knight-grade cannon in combination, the towering war machine is a one-Knight spearhead capable of blowing huge holes in the enemy battle line.

Should this other main weapon arm be a Thermal Cannon, the Knight Crusader is capable of melting through even super-heavy vehicles at close proximity; if it instead carries a Rapid-Fire Battle Cannon, the Crusader is deadly even at long range. Meanwhile, its Gatling Cannon churns out rapid shots, stitching lines across enemy formations or obliterating light vehicles. A Heavy Flamer and Heavy Stubber round out the Knight Crusader's firepower, sweeping its forefront clear of encroaching infantry.

Knights Crusader are typically piloted by especially dutiful and selfless Nobles. Though there are, of course, examples of high-ranking Barons and members of Exalted Courts piloting them, these machines are more often the steeds of those vassals who are of an especially humble or pious nature. Rather than seek the glory of the close-quarters kill, these warriors look only to defend their kin, to cover their glorious charge into battle and ensure that unseen threats are annihilated before they can besmirch the magnificence of their illustrious household. For this reason, the pilots of Knights Crusader are well respected by those within their house and without, seen as loyal and dependable comrades who will never be derelict in their chivalric duties.

In battle, a Knight Crusader will usually advance to an optimal firing position, braces its mighty legs, and lets loose death. Blazing away with two weapons, a Crusader sends forth a fusillade of heavy shells from its Avenger Gatling Cannon, sketching deadly patterns across the foe's frontage. Its other weapon -- usually a Thermal Cannon -- causes the very air to sizzle as it hisses out blasts that can reduce a squad of Chaos Terminators to bubbling slag with every shot. With each sector it clears, the Crusader's steady advance brings new targets under its sights, and it continues to fire with every new stride.

The priority for a Knight Crusader is to find wide open fields of fire, and if the Noble pilot gives any concern to his own shelter, it is but an afterthought. Each such warrior has long ago learned to trust in the strength of his Crusader's Ion Shield, and his own skill in positioning it to halt the worst of any incoming firepower. Should the enemy press forward too closely, the Knight Crusader bears a secondary defence weapon to ward them off, in addition to the considerable crushing power of its stomping gait.

Some Knights Crusader opt for a longer-ranged weapon, exchanging their Thermal Cannon for the rapid-firing Battle Cannon. House Raven has been known to employ a formation of Knights equipped in this manner, a deadly grouping known as an "Eradicator Lance" that can pulverise enemy battle lines at a great distance, saturating them with high explosives. When deployed alongside one or more Knights Valiant, this combination can provide a Noble house with phenomenal ranged killing power, easily equal to that of an Astra Militarum artillery company.

The already impressive firepower of the Knight Crusader is further enhanced by its choice of carapace-mounted weapon. Those that are equipped with Icarus Autocannons on their shoulders are given an additional duty: to protect their comrades from airborne attack. Swivelling in response to their predictive auto-auguries, the Icarus cannons spit streams of flakk fire into the skies, barrels recoiling with each thumping shot. No matter how they jink and roll, enemy aircraft cannot long evade these raking streams of death, and are soon sent spiralling from the air aflame to detonate in distant fireballs beyond the horizon.

Alternatively, many Knights Crusader carry one of two types of missile rack upon their carapace. Those that bear an Ironstorm Missile Pod into battle gain the ability to bombard infantry from afar, raining down terrifying hails of anti-personnel explosives. The wide radius and lethality of these munitions makes the Ironstorm an exceptional weapon for decimating ranks of light infantry through sustained and merciless bombardment.

By comparison, the Stormspear Rocket Pod is intended to provide a Knight with additional anti-armour capability. Perfect for slaughtering elite infantry or fast-moving battle tanks whose weapons may present a real threat to the Crusader or its fellows, Stormspear Rockets fire off in rapid volleys, emitting a distinctive, high-pitched scream before hitting home with hammerblow force.

The original incarnation of the Knight Crusader was provided in the supplement found in Titan Legions 2nd Edition. This account of the Knight Crusader's history has largely been superseded by newer canon in accordance to Codex: Imperial Knights (7th Edition). Please note, that this version contains old information that is no longer considered canon according to the current iteration of the Warhammer 40K universe. For clarity's sake, the original canon has been presented below:

The Knight Crusader, alongside its counterpart the Knight Castellan, are the heaviest types of Knight manufactured by Mechanicus Forge Worlds. These Knights are slower and less nimble than their kin, but benefit from much heavier weaponry and increased firepower as well as considerably thicker and sturdier armour plate. Because of its great bulk the Castellan cannot move fast enough to generate the charge needed to operate a Shock Lance. Instead they are used in a fire support role, providing heavy weapon cover for the other Knight units to charge in whilst the Crusader picks off threats to the main force from the rear. The common feature of this pattern Knight is the huge shoulder mounted Quake Cannon, a modified Titan weapon that can destroy Titans and buildings alike. 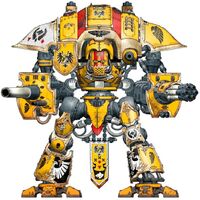 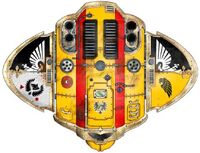 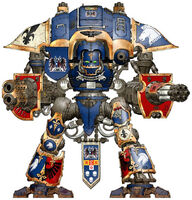 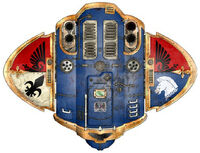 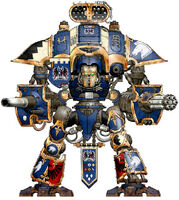 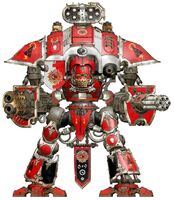 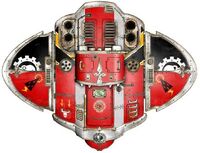 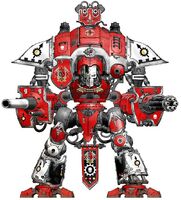 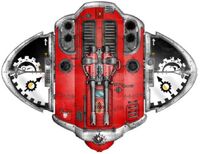 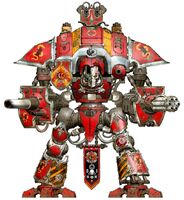 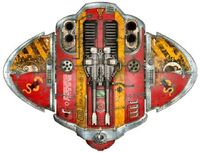 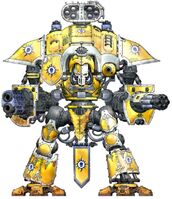 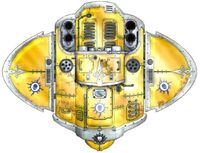 A Knight Crusader detachment (Rogue Trader era)
Add a photo to this gallery
Retrieved from "https://warhammer40k.fandom.com/wiki/Knight_Crusader?oldid=339410"
Community content is available under CC-BY-SA unless otherwise noted.