The Knight Castellan is a super-heavy Imperial Knight that makes use of the Dominus-class chassis. It is used primarily as a long-range artillery platform and is capable of striking the enemy from extreme range. Although slower than other Knights, this pattern benefits from substantially increased firepower and much thicker armour than its smaller counterparts.

The Knight Castellan is one of the two most commonly deployed patterns of the super-heavy Dominus-class chassis, the other being the Knight Valiant. With its dual plasma core sending energy surging through its huge frame, the Castellan can mount a frightening array of weapons systems while maintaining its Ion Shield against incoming fire.

Indeed, in extremis, Dominus-class Knight pilots have even been known to overcharge their shield capacitors in order to temporarily project their shields over nearby allies to protect them from harm. It is considered both crass and unnecessary to do this for another Knight, but other Imperial forces fighting alongside Dominus-class Knights have been given good cause to thank the Nobles for their protection.

Likened to a towering fortress, the Knight Castellan is a bastion of walking Imperial might garrisoned by a single Noble Lord and armed with an impressive array of weapons so fearsome that they can tear the heart from an invading enemy. It is the foremost artillery platform within the lances of the knightly houses, hammering the enemy at extreme range from the moment the fight commences.

The arsenal of the Knight Castellan is legendary. On one arm they carry a Plasma Decimator, a huge and obliterative Knight-grade Plasma Weapon capable of bathing swathes of the battlefield in searing energies and reducing the enemy to glowing ashes. Castellan pilots become adept at regulating the flow of plasmic energy from their dual cores to this potent weapon, even risking angering the Machine Spirits in order to unleash an especially ferocious blast should the situation demand it.

The Castellan's other armament is the Volcano Lance. Possessing massive range and stopping power, this massive Lascannon is the bane of super-heavy war engines and beasts. It can core out a lumbering Squiggoth or behead an enemy Titan, and when several Knights Castellan open fire at once, the effect is commensurate with the Lance batteries of an Imperial Navy warship.

Upon the Castellan's broad shoulders are mounted twin Siegebreaker Cannons and 2 Shieldbreaker Missiles. The former are unsubtle gun turrets, fired by Servitor-brain sub-arrays slaved to the pilot's targeting systems. They are capable of laying down a pounding bombardment of heavy ordnance to entirely carpet an area in flame and shrapnel. Shieldbreaker Missiles, meanwhile, are an ancient variant of the redoubtable Hunter-Killer Missile. These warheads incorporate Raptoris Machine Spirits (artificial intelligences) and empyric cascade micro-generators that allow them to disrupt and pass through enemy shields by skipping like hurled stones across the skin of reality, dipping minutely in and out of the Warp in micro-second flickers.

They are employed to punish those dishonourable enemies who cower behind veils of arcane energy or the massed ranks of lesser warriors. After all, as the pilots of the Knights Castellan are fond of saying, there is no escape from the Emperor's wrath.

The technical specifications of the Knight Castellan have not yet been publicly released by the Adeptus Mechanicus.

A pair of Knights Castellan of House Terryn leading the charge against their foes. 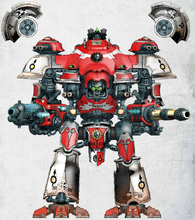 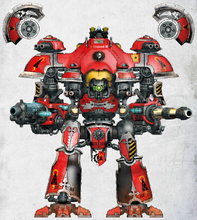 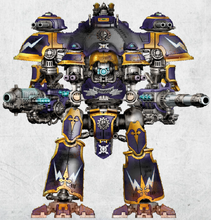 A Knight Castellan of the destroyed Knight World of Kamador, piloted by the Freeblade Lady Kalena Maxus, "the Stormwalker." 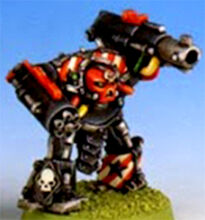 A 1st Edition era Knight Castellan miniature.
Add a photo to this gallery
Retrieved from "https://warhammer40k.fandom.com/wiki/Knight_Castellan?oldid=329549"
Community content is available under CC-BY-SA unless otherwise noted.