Klovis the Redeemer is a noble of House Cawdor and a particularly fanatical and homicidal Redemptionist priest of the Ecclesiarchy from the Hive World of Necromunda.

Based in Hive Primus, the capital hive city of Necromunda, the noble House Cawdor is the stronghold of the Adeptus Ministorum's fanatical Cult of the Redemption, whose prophets foretell of universal destruction. Although the cult has its adherents throughout the hive, in House Cawdor it has attained the status of an official religion. For this reason, the House is also known as the House of Redemption. Members of House Cawdor are forbidden to show their faces in public, and so they wear elaborate masks to conceal their identities.

Klovis the Redeemer is a legend in his own lifetime and a force to be reckoned with. From his fortress in the Ash Wastes, two weeks journey from Hive Primus, Klovis launches Crusades which are notorious for the slaughter they bring. After the Arch Zealot himself, Klovis the Redeemer is perhaps the most notorious Redemptionist in the Underhive. He battles tirelessly against the infidels, scourging Heretics and purging mutants. His righteous acts of merciful execution are chronicled by the hand of his faithful scribe, Deacon Malakev, who is also charged with carrying the large tome of tortures known as the Liber Excruciatus. Klovis often leads a loyal flock of dedicated Zealots on Redemptionist Crusades into the Underhive. These are crazed individuals that are members of the Necromundan Redemeptionist cults who have been touched by the Emperor's fury. Klovis also leads a cowardly Ratskin named Brude, whom he rescued from a life of sin, turning him from his heretical ways into a faithful follower of the Imperial Creed.

In battle Klovis wears the sacred vestments of his calling - heavy padded robes with mesh armour beneath it. He also wears his customary ornate Redeemer mask and a crown of iron that is connected to two canisters of Promethium on his back, enabling the crown to constantly burn with the righteous flame of his zeal. In close quarters battle, he can turn a valve on the fuel canisters on his back, causing the flames of his crown to release a large blast of fire to burn his enemies.

The Redeemer, with Deacon Malakev at his side, leading his flock of Zealots on a crusade into the Necromundan Underhive 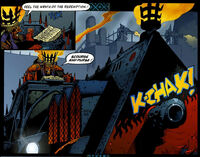 The Redeemer, from his command pulpit aboard the Pulpitek, prepares to fire its Autocannons

The Redeemer's fortress in the Ash Wastes of Necromunda
Add a photo to this gallery
Retrieved from "https://warhammer40k.fandom.com/wiki/Klovis_the_Redeemer?oldid=337068"
Community content is available under CC-BY-SA unless otherwise noted.