The Ork Kill Kroozer is as close to a "standard" type of cruiser as Orks get. Usually based on the hulks of destroyed Imperial and Chaos Cruisers, Kill Kroozers are protected by heavy prow armour and primarily armed with lots of Gunz and Heavy Gunz, with some also adding Torpedo Launchas to their arsenal.

Kill Kroozers were a major threat to shipping in the Gothic Sector even during peacetime, and their numbers only grew during the Gothic War, presumably due to all of the starship hulks left over from the battles between Imperial and Chaos forces.

Kill Kroozers also made up a large portion of the Warlord Ghazghkull Mag Uruk Thraka's armada during the Third War for Armageddon, and as such saw action in virtually every fleet engagement of the war. They were especially pivotal during the Battle of Pelucidar when a squadron of Kill Kroozers crippled and boarded the Apocalypse-class Battleship Triumph. 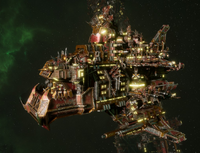