"Your death shall slake my axe's thirst!"

Khorne Berzerkers are Chaos Space Marines dedicated to glorifying the Chaos God Khorne through brutal melee combat. Driven solely by their raging desire to spill blood and take lives, a Berzerker's sole purpose in life is to destroy their enemies in the name of the Blood God and take life in the most brutal and barbaric fashion imaginable.

Berzerkers refuse to use most forms of ranged weaponry and usually make almost exclusive use of close combat melee weapons, in particular the Chainaxe, as the axe is the favoured weapon of Khorne.

However, Khornate Berzerkers will use any weapon they can get their hands on, even their own bodies, as long as they can continue to engage in bloodshed.

The first Khornate Berzerkers amongst Mankind emerged from the gruesome experiments of Angron, the Primarch of the World Eaters Legion. Upon taking control of the XIIth Space Marine Legion, the bloody-handed Primarch enacted many changes.

Knowing how successful his own cortical implants were at boosting a warrior's prowess in battle, Angron ordered his Apothecarion to insert the same Butcher's Nails implants within every Astartes of the World Eaters Legion to enhance aggression and pain tolerance far beyond that which even the gene-engineered flesh of a member of the Space Marine Legions was capable.

The Nails removed all sense of fear and danger and then heightened the rush his warriors experienced in combat. The majority of those Astartes implanted with this technology were absorbed back into the XIIth Legion's line units, while those deemed perhaps too unstable for such tasks joined a growing number of near-berzerker assault units known as Rampager Squads.

Even within these units, those too far gone to be anything but restrained as savages between battles became known as the Caedere or the "Butchers," a frightening portent of what was soon to come for the entirety of the XIIth Legion.

In the aftermath of the slaughter of the Drop Site Massacre on Istvaan V, an event that the masters of Bodt (the World Eaters' fief/muster world) learned of after the fact, a delegation of senior World Eaters Apothecaries, aided and advised by peers from the Emperor's Children and Word Bearers Legions, arrived there unannounced.

They quickly assumed command of the induction facilities and instigated a series of revisions to the XIIth Legion's recruitment practices. It was long established that the XIIth Legion's implantation protocols sat at the extreme end of the spectrum of tolerance and there had been many calls from Terra and from other Legions to rein in these practices, but in the aftermath of the Drop Site Massacre and with the arrival of the new overlord cadre, all restraints were removed.

It was said that the raw fuel for the new processes had been harvested from the blood-soaked killing fields of the Urgall Depression, ritually gathered up by the sons of Lorgar and alchemically rendered down by the fell genius of the Emperor's Children. It was to the World Eaters apothecaries that the final duty of implantation would fall, and the result was hideous indeed.

Using the raw material of the waste-dwelling Numen gun-clanners, the Apothecaries created a new generation of recruits. Where the process of creating a warrior of the Legiones Astartes should ordinarily been painstakingly undertaken over a period of Terran years, this new generation was brought into being in solar months. The process was shockingly wasteful and while many aspirants simply perished in the bio-vats, many more underwent catastrophic biological destabilisation, necessitating the purging of the implantation chambers by fire and radiation.

Those few who survived fell far short of the transhuman ideal the Emperor had intended for the Legiones Astartes. Even for the World Eaters, these were monsters made flesh, their bodies swollen by forbidden processes and their brains flooded with burning autonomic stimulators that, in conjunction with the so-called "Butcher's Nails" implants standard throughout the Legion, induced a permanent state of hyper-aggression.

Furthermore, the flash-indoctrination protocols to which each aspirant was subjected invested him with the stolen memories of a hundred thousand kills, a flickering montage of other warriors' lives and deaths cycling through their consciousness in an eternal loop.

From the moment each awoke from the gene-vats, he believed himself a red-handed champion and a veteran of countless wars. His only desire was to shed blood -- his enemies' or his own -- in the name of his Primarch. This was the birth of the first Khornate Berzerkers.

When the World Eaters Legion swore itself to the bloody worship of the Blood God Khorne, the Berzerkers were no longer bound to Imperial battle doctrine and were given full reign to exercise their bloodthirsty skills. They have since become the ultimate close combat shock troops, entering an uncontrollable frenzy in the heat of battle.

Those Chaos Space Marines who wish to fully dedicate themselves to Khorne usually join the World Eaters to undergo the complex psycho-surgery they employ. Once the procedure is complete, they are one with their angry Chaos God, feeling nothing but the desire to kill, maim and burn.

After the World Eaters Legion was sundered at the Battle of Skalathrax, most Khornate Berserkers formed separate warbands, and many bastardised practices of lobotomisation spread to other Chaos Space Marine forces alongside them.

Abaddon the Despoiler, in particular, has recruited a number of highly-skilled Berzerker-surgeons to his cause, and only the Black Legion is even close to the skill of the World Eaters' Apothecaries in their perfection of this barbaric practise.

Khorne's Berzerkers are rightly feared by their allies and their enemies alike. Having sworn their souls to the god of war and murder, Berzerkers find the need to spill "Blood for the Blood God" simply overpowering. Denied the chance to engage in constant slaughter, a Berzerker will become almost uncontrollably enraged and will turn on any living thing whose life can be extinguished to satisfy his sheer need for carnage.

Khornate Berzerkers will gladly slaughter even their own allies when their blood lust has been stoked by the thrill of battle or simply because they have run out of enemies. This situation most famously engulfed the mightiest of the Khornate Berzerkers, Khârn the Betrayer, a Captain of the World Eaters Traitor Legion.

Khornate Berzerkers' sheer bloodthirstiness has earned them a fearsome reputation, yet their uncontrollable urge to slaughter and kill often leaves them being unable to form a cohesive and mutually supportive military unit. This inability as well as the Berserkers' needs to kill using primarily melee weapons often leaves them at a disadvantage when facing opponents who are willing to use basic strategy against the Berserkers' unreasoning savagery and sheer ferocity.

Berzerker warbands show a wide variety in numbers and unit strength and will essentially lend their aid to whichever side in combat offers them the greatest chance to kill and slaughter in the Blood God's name, even if these actions actually aid the Imperium or another of Chaos' mortal enemies.

Savage fighters that revel in the bloodiest hand-to-hand fighting in the perpetual quest to offer up blood and skulls to Khorne, Berzerkers carry many vicious close combat weapons into battle. Many wield roaring, adamantium-bladed Chainaxes, although the Chainsword is equally favoured.

The Chaos Champions that lead each Khornate warband can sometimes be seen hefting heavy, baroque weapons lined with diamond-hard teeth that can chew through enemy vehicles and get at the crew inside. Ritual knives and scimitars are often worn into battle, the blades of which are only ever used to hack head from neck.

After they have taken the heads of every enemy soldier within arm's reach, the warriors of Khorne will even decapitate their own fallen and offer their skulls to their brazen Chaos God before plunging back into the fray. The stark truth is that the brethren of the Blood God care little how they spill the blood of those around them. As far as the Berzerkers are concerned, bare fists or a heavy rock will do if nothing else is available.

The Berzerkers of Khorne relish their role as the Blood God's sacred destroyers and are fanatical in the extreme. Their delight in pain and death is so strong that they have been known to attack their comrades in blind rage and, if no other opponent is present, even to fall upon their own weapons as sacrifices to Khorne.

Even though Khornate Berzerkers "suffer" from this feral bloodlust, they are still Astartes at heart, and most can draw on the experiences of Terran millennia of battle and slaughter to remain alive and overwhelm their foes. Berzerker tactics are anything but subtle, usually consisting of a massive frontal charge coupled with flanking manoeuvres from the fastest amongst them, with warbands often transported to the battle in a Rhino, Land Raider, or on Assault Bikes.

It is also a common sight to see Berzerkers make heavy use of Drop Pod assaults where their unexpected arrival can spell doom for the unprepared. In battle, Berzerkers work themselves into howling frenzies of insane fury and bloodlust, before charging straight into the heart of their enemy's ranks where they can quickly bring their melee weapons to bear.

The danger of such suicidal tactics is of no consequence to these Traitor Marines, and they willingly brave all manner of enemy fire and hazards to come to grips with their foes.

However, some Champions of Khorne are in nominal control of their rage and their warriors, and can display a feral cunning that one would never expect from blood-crazed madmen. These strategems include ambushes where Berzerkers lie in wait for their opponents and attempts at infiltration before unleashing their blood-crazed fury. 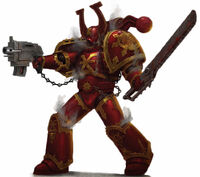 A Khornate Berzerker of the World Eaters Traitor Legion

A Khornate Berzerker revelling in the slaughter of another world

A Khornate Berzerker sits atop his slain foes, bloodied but victorious

Khornate Berzerkers in the heat of battle

A Khornate warband leads a bloody assault on another innocent world