"Better to pluck out your eyes and fight blind than to look upon such a vile, blasphemous monstrosity."

The loathsome yet beguiling entity of the Warp known as a Keeper of Secrets, also sometimes referred to as a "Bringer of Temptation," or a "Feaster of Pain," is a hermaphroditic Greater Daemon of Slaanesh, the Chaos God of amoral pleasure.

The appearance of a Keeper of Secrets, more than any of the other Greater Daemons, can vary wildly. Each of these huge and powerful creatures are created by the capricious whims of its master -- a unique statement of the Prince of Chaos' particular mood and muse at the time of the Daemon's creation.

Some have androgynous faces pierced with rings, whilst others appear more bestial with bovine faces that have fanged maws and flickering forked tongues.

All of these loathsome creatures are several times the height of an ordinary Human being. They possess jewel-like eyes, their heads are crowned by a splendid outcrop of horns and they slither forward using the most sinuous and seductive of movements.

Embodiments of the alluring power of pleasure, the very presence of a Keeper of Secrets is enough to bring even the most stalwart warrior to their knees in anguish and ecstasy.

Pain is simply another sensation to be bestowed upon others, or to be enjoyed when others inflict it, for all sensation is a blessing to a Keeper of Secrets.

These potent servants of Slaanesh feed upon the rampaging hope and the thrill of fear to be found within their enemies, as they feast upon terror and despair.

As despoilers of purity, Keepers of Secrets are known for taking the noble ideals of others and twisting them to the pursuit of selfish ambitions and self-gratification.

A Keeper of Secrets exists to destroy dreams and fulfill nightmares, growing ever more powerful on the intensifying emotions of those that fight them.

There is nothing so loathsome yet beguiling as the Greater Daemons known as Keepers of Secrets, the closest companions and servants of Slaanesh and the leaders of his Legions of Excess.

Wreathed in glamours and mind-dulling musks, this monstrous Daemon masks his true form with supernatural allure. His powerfully muscled body is decked with jewels that hold the souls of his choicest victims, and his razor sharp claws are decorated with brightly coloured lacquers.

A Keeper of Secrets is a highly intelligent creature, a being whose silvered words and languid gestures belie its true power. It is claimed these are the most entrancing of all immortals, and that to look upon one is to surrender every last shred of self-will.

A Greater Daemon of Slaanesh knows the most intimate desires of every mortal being, and will use this horrific knowledge to gain power over its foes, seducing them with whispered promises they cannot hope to resist.

Few who have encountered this Daemon can describe the shame of their desire, nor the lust for violence and depravity that overwhelms their rational senses in its presence, but the Keeper of Secrets is more than just a master of the psyche; on the field of battle it is a graceful yet vicious killer that delights in the excessive, wanton violence it unleashes.

Pain and pleasure are irrevocably blended in the minds of Slaanesh's Greater Daemons, meaning that their blissful enjoyment of battle is unmatched in or outside of the Warp.

However, Keepers of Secrets are only used by Slaanesh when all else has failed, for violence is but a small element of the Dark Prince's nature. When sheer, uncompromising force is the only course left, Slaanesh tasks his Greater Daemons to deliver it in excess.

Keepers of Secrets take gloating, sadistic pleasure in all acts of killing and torture, considering excruciatingly painful death in battle as another form of creative expression. They take delight in the interplay of explosions, blood and horror, feeding upon the strong emotions triggered by mortals as they are torn apart.

Their limbs, at the same time delicate and hideously strong, move in blinding strikes as they eviscerate their opponents, spilling blood in pleasing patterns and spreading body parts in an exotic tapestry. The desperate pleas for mercy and the berserk battle cries of blood-crazed warriors are sonorous music to these Greater Daemons' ears, a delectable opera that honours Slaanesh. The ways of murder are myriad, and the Keeper of Secrets must explore them all.

On the field of battle, the Keepers of Secrets are rarely encountered alone. They are invariably accompanied by swarms of prancing Daemonettes, the ubiquitous Lesser Daemons of the Prince of Chaos. These cavort and dance across the killing fields, singing the praises of their master and dealing death to the armies of men.

Worst of all, the Daemonettes often avoid killing the enemy's greatest champions and leaders, slaying or corrupting lesser troops as a delectable foretaste of the glorious spectacle that is the coming of the Keeper of Secrets.

The champions are taunted and teased by the Daemonettes until the battlefield is carpeted with the corpses of the twitching dead. And then the Greater Daemon appears, and the slaughter and corruption truly begins.

As well as being peerless warriors, a Keeper of Secrets is said to possess arcane knowledge of many mystical arts. It is said that they can hear anything that is said anywhere, in any dimension, and it is this ability that earned them the moniker of "Keeper of Secrets."

They have also been known to trade their knowledge for gifts of services. Using the secrets at their disposal they are able to weave intricate spells of misdirection and mystification, leading the weak to their inevitable doom and sending the strong on fools' errands.

A Keeper of Secrets can invade the thoughts and senses of its enemies, penetrating their every psychic defence -- sending them false visions of glory, stroking their egos and stoking their innermost desires to lead the fools astray.

To corrupt those warriors who are pure of heart and possess noble intent is the greatest of their skills, for they will inevitably turn every quest for glory into a sacrifice upon the altar of the Lord of Pleasure's perverse will.

While Greater Daemons of Slaanesh take particular pleasure in destroying the daemonic creatures of Khorne, the arch rival of the Dark Prince of Chaos, it is a mortal delicacy that holds the most delight.

They thirst for the psychically radiant spirits of the Aeldari above all others, the sheer terror that the race holds within its heart for the Dark God they birthed at the time of the Fall making their souls the headiest of draughts.

A Keeper of Secrets will stop at nothing to glut upon such morsels over and over again, a fact that haunts the Aeldari people's every waking moment. 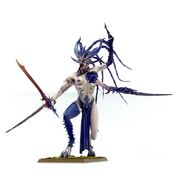 A Keeper of Secrets in all its hideous beauty, wielding a Witstealer Sword. 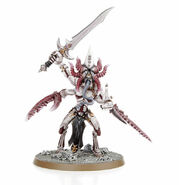 A Keeper of Secrets wielding a Witstealer Sword.
Español
Community content is available under CC-BY-SA unless otherwise noted.
Advertisement