Kayleth was an Eldar Autarch of Craftworld Alaitoc and the supreme commander of the Eldar war host sent to Typhon Primaris during the Third Aurelian Crusade in the hopes of stopping the impending destruction of the planet and the countless Eldar souls hidden within an ancient Craftworld buried within it. In the Eldar ending of Dawn of War II - Retribution that mission proved a failure, but Kayleth was successful in recovering the Spirit Stone of the slain Farseer Taldeer of Ulthwé.

Note: This section summarises the events of the Eldar ending of Dawn of War II - Retribution. Only some of the following may be considered canon.

Not much is known of Kayleth before the events of the Third Aurelian Crusade, other than that she was considered a fearsome warrior of the Eldar after spending many Terran centuries mastering all the aspects of war. Kayleth mentioned that she had advised the leaders of Craftworld Ulthwé not to make the attempt to destroy the Hive World of Meridian that had been led by Farseer Idranel during the First Aurelian Crusade because she considered it too risky, but this advice was ignored. She was first seen in action on Typhon Primaris, leading a small Eldar warhost from Alaitoc and fighting alongside Ronahn, an Eldar Pathfinder and the twin brother of the Farseer Taldeer of Ulthwé who had left that Craftworld behind long before. Kayleth led Ronahn in search of the Inquisitor Adrastia, who she believed to be the "Scion of the Emperor" as foretold in a prophecy that had warned the Eldar of the coming destruction of Typhon Primaris. During their search, they encountered the Warlock Veldoran, who had been wounded during an Ork raid on Typhon Primaris. They recruited Veldoran to serve as an interpreter for Kayleth's prophetic visions. The Eldar then worked to rebuild Typhon Primaris' damaged Webway gates so that they might summon reinforcements. After managing to defeat the Ork Freebooter, Captain Bluddflagg, Kayleth and her forces finally encountered Adrastia, from whom they learned that the entire Aurelian Sub-sector was set for destruction in a series of Exterminatus actions ordered by the Inquisition's Ordo Malleus. The Eldar struck a deal with Adrastia to halt the Exterminatus if they succeeded in killing the Chaos-corrupted Chapter Master of the Blood Ravens Space Marines, Azariah Kyras, whose betrayal of the Imperium of Man had put the sub-sector at risk.

Kayleth managed to recruit Farseer Elenwe to aid with the true reason the Eldar of Alaitoc were so desperate to save Typhon Primaris from destruction: the preservation of the ancient Craftworld buried deep within Typhon Primaris and the retrieval of the thousands of Eldar Spirit Stones still trapped within it. If Typhon Primaris was destroyed by an Imperial Exterminatus, those souls would be consumed by Slaanesh's never-ending thirst. To prevent that outcome, the Eldar under Kayleth's command traveled across the sub-sector to bolster their war host and combat the looming Chaos threat to prevent the need for the Exterminatus. However, upon returning to Typhon Primaris, Kayleth and her war host were ambushed by Eldar from Craftworld Biel-Tan led by a Warp Spider Exarch who was acting under the guidance of another prophecy that had foreseen that it was the actions of Kayleth and her warriors that would lead to the loss of the ancient Eldar souls trapped on Typhon Primaris. After defeating the warriors of Biel-Tan while they were engaged in an unknown ritual, Kayleth and her host encountered Azariah Kyras. The corrupt Chapter Master and Chief Librarian of the Blood Ravens revealed that he had manipulated Kayleth and her host into killing their fellow Eldar so that it would disrupt a ritual actually intended to prevent him from drawing Adrastia's Exterminatus fleet to Typhon Primaris and serve as a cover for his execution of Farseer Taldeer.

Kayleth and her group managed to escape the planet as it was being destroyed by the Exterminatus fleet, thus casting into the Warp, to her great sorrow, all of the world's Eldar souls, just as the Biel-Tan prophecy had foreseen. She and her surviving warriors teleported aboard the Space Hulk Judgment of Carrion where they learned that Kyras had the Spirit Stone of Taldeer in his possession, having taken it from Adrastia. Realising that Taldeer's wisdom and power could be used to help save the Eldar of Ulthwé from the threat of the awakening Necrons, Kayleth and her warriors escaped the Space Hulk and made their way to the Dead World of Cyrene where Kyras had established his primary base. There, they met another Eldar warband led by the Howling Banshee Exarch Tyrea who had been sent to seal off the Chaos-corrupted world's Webway gate that led to Craftworld Ulthwé. As penance for her failure to save the Eldar souls of Typhon Primaris, Kayleth agreed to sacrifice Tyrea to awaken the Avatar of Khaela Mensha Khaine, the Eldar God of War. With the aid of the Avatar of Khaine, the Eldar mamaged to defeat Kyras and his Traitor Blood Ravens and retrieve Taldeer's Spirit Stone. Kayleth handed the stone over to Ronahn, Taldeer's twin brother, who promised to return to Ulthwé for the first time in many Terran years to bring his sister home. 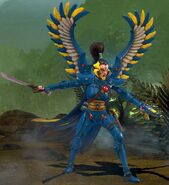 Autarch Kayleth in combat on Typhon Primaris
Add a photo to this gallery
Retrieved from "https://warhammer40k.fandom.com/wiki/Kayleth?oldid=296998"
Community content is available under CC-BY-SA unless otherwise noted.