They are much larger and more powerful than the standard Servitors employed for multiple tasks across the Imperium of Man. There are two variants of the Kataphron Battle Servitor normally employed depending on the tactical objective of the controlling Tech-adepts -- the Kataphron Breacher and the Kataphron Destroyer.

The Servitor complement of even a single Forge World will typically number in the tens of millions. Many were once wanted criminals -- hard and intimidating men from all walks of Imperial life, from hive city gangers stitched with vat-grown slabs of muscle to Inquisitorial enforcers that committed bloody murder after learning too much. When the Adeptus Arbites find and condemn a transgressor of surpassing physical size, that individual will be beaten senseless with Power Mauls and sent battered and bloody to the nearest Forge World. There he is given a second chance to serve Mankind as one of its most faithful servants. First the specimen is mind-wiped, chemically lobotomised so that his personality and memories are a blank slate -- in theory at least. Next his arms are cut away, usually replaced with weapons or tools suited to the new role his masters have chosen for him. In the case of Battle Servitors like the Kataphron, the specimen will be halved at the abdomen and permanently sutured and neural-cauterised into a tracked motive unit. His mind will be hardwired with targeting Cogitators, and his voice box surgically modified to better sing binharic praise to the Machine God. The process is of course painful in the extreme, but then no atonement is ever truly complete without sacrifice.

Kataphron Breachers are Battle Servitors many times the size and power of those used by the rest of the Imperium. Utterly deadly at close quarters, they are not born so much as constructed, their every enhancement geared for maximum lethality. They are easily recognised by their growling motive units, vicious hydraulic pincers and deadly shoulder-mounted cannons. Yet the most vital component of all is within -- the soul of a violent man. In battle Kataphron Breachers rumble forward at the command of their Tech-priest masters, fulfilling the role of living shield and battering ram alike. Originally devised to break apart enemy battle lines and fortifications, they are of great use to those Adepts who wish to seize a valuable artefact from the clutches of would-be usurpers. As they near the front line the volleys levelled by the foe thunder around the Breachers to little effect; the thick overlapping plates that cover the flesh-parts of the Battle Servitors make them all but invulnerable to small arms fire. Once their proximity bells chime, Breachers return fire with helical blasts of energy from Heavy Arc Rifles or the twisting, ripping fields of Torsion Cannons. Whilst the foe scatters in disarray the Breachers accelerate, crashing into enemy lines to crush and kill with piston-driven talons and coruscating Arc Claws.

The cyborg horrors known as Kataphron Destroyers exist only to kill. There is perhaps no purer calling in all the galaxy than that of the living weapon, especially one unsullied by the responsibility of morality, or even thought. All Servitors are ultimately only tools wielded by the hand of another, and the Kataphrons are no exception. When such a Battle Servitor is controlled by an Adept of the Machine God, they become destruction incarnate. Where the standard Kataphron Breacher has at least one clawlike arm, the Destroyer has both its upper limbs replaced by high-yield weaponry. On one side it mounts a cannon of advanced design, ranging from the Heavy Phosphor Blaster -- a weapon that fires white-hot spheres that cling, burning, to the target -- to the Plasma Culverin, a cannon so volatile the Servitor's own flesh crisps and burns even as his targets are reduced to molten sludge. Perhaps most feared of all the Destroyer's tools is the Heavy Graviton Cannon, a weapon that can flatten even the Wraithbone ghost constructs of the Eldar in a single crushing solar second. Their potential for dealing death does not end there, for on the other side of their torso Destroyers bear secondary weapon systems that can hurl nearby enemies back with roaring gouts of flame and streams of phosphor shot. Those that somehow survive this blistering array of firepower would do well to flee quickly, lest they be ground into the dirt under the Destroyer's heavy tracks. 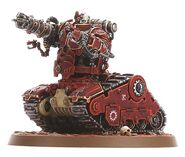 A Kataphron Breacher armed with a Torsion Cannon

A Kataphron Destroyer armed with a Heavy Graviton Cannon
Add a photo to this gallery
Retrieved from "https://warhammer40k.fandom.com/wiki/Kataphron_Battle_Servitor?oldid=326468"
Community content is available under CC-BY-SA unless otherwise noted.