"When veteran Guardsmen flee, the Kasrkin stand. When victory is near, the Kasrkin seize it. When the Archenemy attacks, the Kasrkin Elite are the rock upon which traitors shall break."

The Kasrkin (pronounced "KAH-sir-kin") are elite troops of the Astra Militarum and were dedicated to the security of the Fortress World of Cadia from which they once hailed.

Because they are elite special forces troops drawn from the same world as the existing Cadian Shock Troops regiments of the Imperial Guard, the Kasrkin are officially classified by the Departmento Munitorum as the type of Tempestus Scions known as Grenadiers because of their heavy weapons and elite tactical training.

Their name comes from the title of the fortress cities of Cadia, which are called "kasrs" in the native Cadian dialect of Low Gothic.

The Kasrkin are the elite of the already skilled Cadian planetary military forces and are chosen to serve in the Astra Militarum when they are still serving as Whiteshields (new recruits) in the Cadian Planetary Defence Forces.

Kasrkin soldiers were well-known amongst the Storm Trooper regiments assigned to Cadia, and are renowned for their ability to remain cool under fire in combat situations where even many other veteran Cadian Guardsmen would break.

In the wake of the destruction of Cadia during the 13th Black Crusade, many Kasrkin units are still employed and seek to pass on their training and standards to a new generation of Cadian survivors and their descendants who will face the Archenemy in a never-ending quest for vengeance for their lost world.

"He saw two squads of Kasrkin storm troopers moving out from the colonel's side, swiftly taking up positions that would allow them to hold the passage open for as long as possible. They moved as one, firing clean, disciplined hellgun bursts for maximum effect, and Wulfe found he was profoundly impressed. The Kasrkin were a special breed. He wondered what it took to remain so cool-headed, surrounded by all that death and horror, by alien savages that outweighed you three or four times. He marvelled at their calm efficiency..."


— Sergeant Wulfe of the Cadian 81st Armoured Regiment, witnessing the Kasrkin in battle

The Cadian Shock Troops are already known throughout the Imperium as a highly-skilled and disciplined force, so the ranks of the Kasrkin are truly amongst the best of the best in the Imperial Guard. Many potential recruits for the Kasrkin are chosen at a young age when they are still serving as Whiteshields (new recruits) in the Cadian Planetary Defence Forces within the Cadian Youth Army.

Those who are chosen must first prove themselves in the Shock Troops and become hardened veterans before they are guided to the Kasrkin. Punishing regimes of additional training in the harshest warzones tempers each Kasrkin into a hardened fighter who is capable of facing the horrors of battle in the late 41st Millennium.

To serve in the Kasrkin is a great honour, for they are amongst the finest troops in the Imperium. However, much is expected of such warriors -- the Kasrkin are constantly placed in the fiercest fighting, sent into battle against deadly foes, and relied upon to act above and beyond the call of duty in the Emperor's name. The roll of valour for the Kasrkin is long and well-respected, for they are warriors of exceptional courage. Many times, the tide of battle has been turned by the precise firepower and iron discipline of the Kasrkin.

Kasrkin are highly trained in the use of numerous heavy weapons, and are entrusted with special equipment of high quality and rare craftsmanship such as their Hellguns and Hotshot Lasguns, which are much more powerful versions of the normal Lasgun used by regular Guardsmen. They wear Carapace Armor and helmets sealed for hazardous environments. This armour also deflects and absorbs incoming projectiles far better than standard Imperial Guard Flak Armour.

Kasrkin are also given minor biological modifications, increasing their resilience while allowing them to move quickly despite their heavier gear. Kasrkin sergeants often wield rare and powerful equipment more commonly used by Imperial Guard officers, such as Power Swords and hot-shot Laspistols. The Kasrkin can carry special weapons suited to their assault role on the battlefield and exceptional marksmanship, including Plasma Guns, Meltaguns, Grenade Launchers, and Flamers.

True to their nature as Grenadiers, the Kasrkin carry both Frag Grenades and Krak Grenades and are extensively trained in the use of these weapons. Some chroniclers amongst the Tactica Imperialis have recorded a number of difficult firefights in the Kasrkin's history that were resolved by the creative application of grenades.

Even when Kasrkin troopers are not equipped with their full panoply of war, they are still instantly recognisable. Aside from their heavily-muscled physiques, they all bear the brand of the Caducades sea eagle on their necks, marking them out as members of the Cadian elite.

The Kasrkin also have a distinct ethos of duty and honour that is impressive for members of the Astra Militarum, who are usually far more interested simply in staying alive.

Whereas the standard Storm Trooper is looked down upon by many different regiments of Imperial Guardsmen for their elite status, the Kasrkin are looked upon with great favour among the standard regiments of Cadian Shock Troops.

After generation upon generation of conflict against the terrors of the Warp and the mortal champions of the Ruinous Powers, the Kasrkin have become extremely regimented in their thinking, and regard the strict culture of Cadia as a critical mental defence against such horrors.

They are the ultimate warriors of the Imperial Guard who fought against the forces of Chaos, having led the charge in the defence of Cadia from the Chaotic forces of Abaddon's 13th Black Crusade in 999.M41. To be a Kasrkin is to hold a position of honour, and all Cadians recognise this truth and the role they play in defending their world.

Even amongst the elite ranks of the Kasrkin, there are those who have fought in more battles than any other. These "Veteran Kasrkin" are often sought after by Generals and other high-ranking leaders of the Astra Militarum.

Cadia's High Command will only approve such requests if an officer's cause is deemed worthy. If so, they will be able to field squads of Veteran Kasrkin as their personal commandos and honour guards.

What follows is a list of the most common items of wargear issued to the members of the Kasrkin regiments: 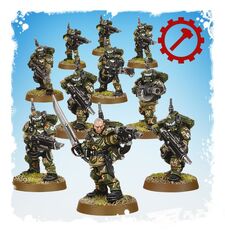 A squad of elite Kasrkin 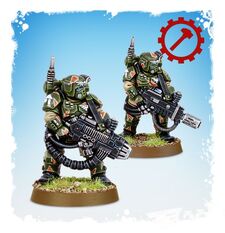 A pair of Kasrkin armed with a Plasma Gun and Meltagun
Add a photo to this gallery
Retrieved from "https://warhammer40k.fandom.com/wiki/Kasrkin?oldid=378409"
Community content is available under CC-BY-SA unless otherwise noted.