Lords of the Iron Thorn

As one of the oldest dynasties in Commorragh, the Kabal of the Lords of the Iron Thorn was amongst the first to rise to prominence in the wake of Asdrubael Vect's ascendancy. As masters of industry the skimmers produced by their vehicle factories ensured that the Lords of Iron Thorn would grow to become amongst the wealthiest and most powerful of their kind.

Masters of the sub-realm of Pandaimon within the Dark City, embittered remnants of a long-gone Aeldari aristocracy, the Lords of the Iron Thorn are Commorragh's pre-eminent weapons crafters. Prowling squadrons of Ravager gunships and sleek-sailed Raiders fill the skies of Pandaimon, sweeping between its spires in great numbers.

Long ago, this proud and ancient Kabal were brought to their knees after an ill-fated rebellion against Asdrubael Vect by their then-master, Archon Qu. However, in the centuries since, they have rebuilt their power through ensuring the Kabal of the Black Heart remains well-supplied with Iron Thorn war machines. This Kabal's weapon factories and grav-docks are so sprawling they would cover the surface of a small moon, and they ring night and day with the hellish clamour of slave-driven industry.

It is said that the mark of the Iron Thorn upon a Raider's hull is akin to Aestra Khromys' brand upon the stock of a gun -- a mark of quality that is second to none. The Lords of the Iron Thorn are highly active in the Drukhari raids upon realspace, not least because every successful attack proves afresh the power of their airborne armada. They believe in the application of overwhelming firepower, and delight in proving the superiority of their finely-crafted gunboats over the lumbering war engines of the lesser races.

The nobility of the Lords of the Iron Thorn can trace their heritage back to the days before the Fall, when the Eldar first established the city-port of Commorragh in a vital junction of the Webway, and pride in the purity in of their bloodline has fostered a monstrous arrogance amongst their rulers through the ages. To be renowned for this trait even amongst others of their kind is a sign of hubris that truly knows no bounds. This attitude has been accompanied by insatiable ambition that has served them well, and has led to them becoming one of the most influential institutions in Commorragh. Yet it is the very same character flaw that once almost led to the Kabal's destruction.

In the long history of Commorragh, there are countless tales of treachery, murder and base depravity, but far fewer of defiance. However, despite Asdrubael Vect proving that he would ruthlessly crush any insurrection, one Kabal not only had the audacity to denounce him, but also the strength to withstand his fury: the Lords of the Iron Thorn. In the Imperial year 799.M38, the Archon of the Lords of the Iron Thorn, an arrogant highborn by the name of Draylin Qu declared the independence of the trans-dimensional satellite realm of Pandaimon from the rest of Commorragh. Most believe his motives were fuelled simply by greed -- that Qu sought to forge Pandaimon into his own empire, free from Vect's influence. Others believe that Qu's reason were economical, claiming he was attempting to light the spark of total war in Commorragh to make a financial killing from the supply of arms and craft to the warring factions. Regardless of the real motive behind his actions, Qu had thrown down the gauntlet to Asdrubael Vect.

Bitter fighting soon erupted between the Lords of the Iron Throne and Vect's own Kabal of the Black Heart, as Commorragh's Supreme Overlord sought to rid himself of his insolent rival. However, Qu had anticipated the ferocity of Vect's response and had long prepared to meet his powerful forces in battle. The Lords of the Iron Thorn had more than quadrupled their output of attack craft, and Qu had spared no expense to ensure that his gunners were amongst the finest in Commorragh. Squadron after squadron of heavily-armed skimmers would blunt Vect's initial attacks and prevent him from securing a foothold in Pandaimon. Everywhere Vect's forces gathered for an attack, they were assailed without remorse by vast schools of Qu's craft, their own vehicles left in smoldering ruins before they could respond. Yet the numbers and fearsome fighting prowess of the Kabal of the Black Heart denied Qu the opportunity to gain any significant advantage in return. With neither side able to gain the upper hand, the bitter fighting raged on for many weeks.

Ultimately, it was not Vect that would be Qu's undoing, but patricide -- Qu's daughter, Veryna had secretly become one of Vect's consorts. Veryna kissed her father with lips coated in the neurotoxin known as "essence of bloodfire", and he died horribly as his nerves caught fire from within. With Qu dead, it was simple matter for Vect, backed by the bloody-handed warriors of no less than five Incubi temples, to secure Pandaimon's unconditional surrender. The massacre that ensued in reprisal for their defiance was one of the most horrific in Commorragh's history -- quite a feat for a race renowned for the murderlust. Vect only ordered an end to the slaughter because he had been impressed with how well his adversaries had fought, and he believed they could prove to be a useful asset in the future. However, though Vect eventually withdrew his forces, he did not do so without a suitable memento. Draylin Qu's face, restored by the Haemonculi to rudimentary life, now adorns a banner depicting the sigil of the Lords of the Iron Thorn in the palace of Asdrubael Vect. Qu's wailing visage serves as a symbol of Vect's triumph and a clear warning to others that would seek to free themselves from oppressive yoke.

Back From the Precipice

Though the war with Asdrubael Vect left the Lords of Iron Thorn of the brink of destruction, their formidable resources combined with the determination with which they fought saw them survive against the odds. It was time to rebuild their shattered domain and begin the long journey to restoring their former glory.

Over the long years since their defeat, the Lords of Iron Thorn have gradually recovered their strength and begun once again to impose their influence on their rivals throughout the Dark City. The rulers of the Kabal have used all of their malicious cunning to manipulate and bribe their way back into the favour of prominent figures throughout Commorragh, and their star is once again on the rise. As the 41st Millennium draws to a close, the master of the Kabal is a shrewd Archon by the name of Khadys Abrahak. In his youth, he fought as one of his Kabal's Trueborn during Pandaimon's war of secession with the Kabal of the Black Heart, and Abrahak still harbours a bitter resentment of his Kabal's humiliation at the hands of Asdrubael Vect. Though he feigns subservience whenever the Supreme Overlord calls upon his Kabal's warriors or resources, Abrahak's spies are ever at work to undermine Vect.

The Fires of Industry

The secret to the survival and subsequent resurgence of the Lords of the Iron Thorn lies in the Kabal's sprawling workshops are amongst the finest in Commorragh, and many will pay handsomely to ensure that their realspace raids are equipped with attack craft that bear the mark of Iron Thorn. The manufacture of Raiders, Ravagers and Venoms is the lifeblood of the Lords of Iron Thorn, and as a result, the Kabal has gathered innumerable slaves skilled in the art of forging. Indeed, the Lords of Iron Thorn have launched many realspace raids for this explicit purpose.

Lords of Iron and War

The Lords of Iron Thorn launch their raids into realspace from the backs of a powerful fleet of Raiders. The gunners of the Kabal are amongst the most highly trained in all of the Dark City, and take great delight in blasting asunder the armoured vehicles of their prey with precision beams of darklight. So formidable is their firepower that the Kabal can afford to engage targets that are much better equipped that those singled out by the Archons of other Kabals. This gives the Lords of Iron Thorn a valuable advantage, for they have the means to cripple or destroy threats within moments of the outset of any engagement. Khadys Abrahak leads many of the Kabal's realspace raids personally, meticulously planning when and where to strike for the greatest reward. Though the fleet at his disposal is the envy of many of his rival Archons, he will not commit to battle without ensuring that the risks are heavily outweighed by the reward. So careful is Abrahak that his detractors claim he would rather lose a dozen of his Trueborn warriors than one of his precious skimmers.

Forces of the Lords of Iron Thorn

The Archon of the Lords of Iron Thorn is rarely seen without a powerful force of his Kabal's warriors to deter any would-be assassination attempts. The Harvesters of Pain are one such band of Kabalites. When not on duty in his capacity, they are often to be found in the workshops of Pandaimon, finding sport to sate their sadistic desires from amongst the slaves that work there. This can often result in some of the unfortunate workforce suffering agonising deaths for the sport of their tormentors. However, Abrahak does not censor them for their actions -- quite the opposite. By indulging their perversions, he ensures their loyalty.

Every member of the Undying has "lived" for over five millennia, if such a word can be used to describe their existence. Each warrior has died dozens of times and been reborn in the growth vats of the Haemonculi. Such is their technological mastery that defiance of death is far from unusual amongst the Dark Eldar. To the members of the Undying, however, it has become such a common occurrence that it has become a source of mirth. The worst offender is Tylith Kroval, whose shattered remains have been reconstituted on no fewer than forty-two occasions.

The Untainted, led by Meshael The Proud, have fought alongside Khadys Abrahak since the war of secession, and are rarely apart from their Archon. In a culture where treachery and backstabbing is rife, it is rare for a clique of warriors to display anything that resembles respect for their master, let alone loyalty. Yet Abrahak earned the trust of theses Trueborn warriors who would become his closest aides during the struggle against the Kabal of the Black Heart. 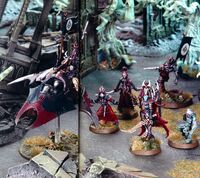 Lords of the Iron Thorn's Kabalite Trueborn, The Untainted 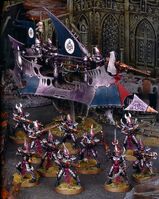 Lords of the Iron Thorn's Kabalite Warriors, The Undying

A Dark Lance aboard a Lords of the Iron Thorn Raider. The Kabal's gunners have a fearsome reputation for marksmanship.

Lords of the Iron Thorn Raider vehicle markings. Note: Kabal symbol is proudly emblazoned on the aethersails. The prows of their vehicles are often embellished with stylised depictions of wicked thorns. 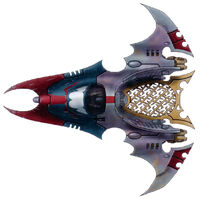 The Lords of the Iron Thorn raid an unsuspecting Imperial world.
Add a photo to this gallery
Retrieved from "https://warhammer40k.fandom.com/wiki/Kabal_of_the_Lords_of_the_Iron_Thorn?oldid=341751"
Community content is available under CC-BY-SA unless otherwise noted.