"We are the masters of the shadowed sky.
Not for us a grubbing crawl through the mud and filth of battle.
Leave that to the lesser races.
We shall only set foot upon the soil these vermin call home in order to
place our bladed heels upon their throats."

Kabal of the Flayed Skull

The warriors of the Kabal of the Flayed Skull are instantly recognisable by the stylised bloodstreaks that they sport upon their snarling faces, echoing the sinister design of their Kabal's symbol. In terms of sheer military force they are second only to Asdrubael Vect's Kabal of the Black Heart. The Flayed Skull's Archon, Lord Vraesque Malidrach, began his long and dishonourable career as a low-born Reaver in the arena of Khad Mhetrul, where he was known for his signature brand of high-speed violence.

Even after murdering his way to mastery over his own Kabal, Vraesque has lost little of the flare he cultivated in the arena, and is known for slaughtering his foes in swift, shocking raids. When faced with a worthwhile champion, the low-born lord may treat his warriors to a display of the savagery for which he gained his fame -- decapitating his opponent, then slicing off their face with a single swing while their head arcs through the air.

The Kabal of the Flayed Skull rule over one of Commorragh's highest and most jagged spires. Known as the Poisoned Crown, the spire is encrusted with docks and grav-moorings beyond counting, and around them hangs a constantly shifting cloud of Razorwing Jetfighters and Voidraven Bombers. Those Commorrites who win their way out of the arenas to own such an Attack Craft are eager to align themselves with the Flayed Skull, for Vraesque is a renowned master of airborne warfare. Furthermore, he is quick to adopt new aerial strategies created in the arenas, so long as they are sufficiently spectacular and violent.

These are often enacted by Reavers and Hellions who clamour to go to war alongside the Flayed Skull, or by flocks of Scourges who have sold their fickle loyalty to Vraesque. So honed are the Kabal’s aerial skills that they once famously conquered the world of Thrandium without a single Kabalite setting foot upon the ground.

"We are swift, and we are lethal. We are a poisoned dagger thrust into the heart of the foe. We are the hidden blade, the strike so sudden that the enemy falls before they ever know they are under attack."

This Kabal's ruler, Archon Vraesque Malidrach, was once a notorious Reaver death racer. Malidrach survived over one hundred races in the laserloop of Khad Mhetrul -- the Bitterspire -- and made a name for himself as a vicious competitor. Eventually, Vraesque the Reaver used his riches and fame to buy, bully or steal the allegiance of sufficient Kabalite followers to make himself Vraesque the Archon. With this, the Kabal of the Flayed Skull was born.

Since its inception, this Kabal has grown at an impressive rate. In terms of sheer logistical strength, the Flayed Skull is said to be second only to Asdrubael Vect's Kabal of the Black Heart. In the centuries since Vraesque first formed his Kabal, its victories have far outnumbered its defeats. This is thanks in no small part to Vraesque's incredible reactions, lighting-fast tactical mind and killer instincts. The Archon has never allowed the skills learned as a Reaver to dull with disuse. Surrounding himself with similarly quick-witted lieutenants has ensured that the Kabal of the Flayed Skull never finds itself ambushed, trapped or outmanoeuvred. It does not take great imagination to see how this proves invaluable to a Kabal in a city where most killing blows are struck from behind.

Archon Vraesque also favours overwhelming airborne strength in battle. As such, his Kabal maintains mercenary contracts with an unprecedented number of Razorwing Jetfighter pilots and Voidraven Bomber crews. Furthermore, Malidrach puts great stock in the winged Scourges, and rarely goes to battle without at least one band of these altered warriors in his pay. When the Kabal of the Flayed Skull launches a raid, it fills the skies with screaming flocks of death-dealers, each vying for the murderous honour of claiming first blood.

The Kabal of the Flayed Skull has countless outposts and hideways scattered throughout Commorragh, from the dubious gambling dens of the Sprawlgates of Heng Khestuul, to hidden aerial platforms concealed in the Shadowcloud Abyss. However, the heart of the Kabal's holdings, and the personal seat of power of Archon Malidrach himself, is the towering armoured eyrie known as the Poisoned Crown. Inaccessible by any means other than flight, the Poisoned Crown towers above its surrounding districts. Bursting from the ground around its base comes an insane network of pipes both metallic and organic. This tentacular tangle winds its way up the outside of the spire, making it appear as though the fortress is under attack by some promethean beast. Finally, having squirmed their way up past countless weapon-blisters, torture galleries and aircraft hangars, the pipes reach the summit of the Poisoned Crown. Here, they grope skywards in a madman's idea of regal circlet. The pipes, issuing all the way from the laboratories of the Haemonculi, vent a constant stream of toxic fog. They wreath the crest of the Kabal's lair in the vile miasma that gives the place its name; above which looms a statue of Vraesque himself.

When the Kabal of the Flayed Skull goes to war, it strikes from the skies with furious purpose. The first priority is to establish air superiority, for Archon Vraesque will brook no threat to the movement of his raiding party. To this end, a Flayed Skull raid will be heralded by hurtling aircraft that concentrate on eliminating all enemy air power. Behind these planes come the Kabal's Raiders, Ravagers and Venoms, their weapons spitting fury as they knock out targets that the Razorwing Jetfighters and Voidraven Bombers have missed.

There have been occasions when Flayed Skull raids have remained airborne right up until the last moment, the Kabal's infantry barely setting foot on enemy soil. Certainly the warriors of the Kabal like to brag of such victories, and tales of battles such as the Morresti Ambush and the attack on Thandium have spread throughout Commorragh. However, sometimes the prey may need to be rooted out of established defences, or ground-based objectives may need to be captured -- however temporarily -- to ensure force fields are lowered, air defences crippled or whatever else. In such instances, the Kabal of the Flayed Skull will deploy its infantry forces in strength, backing them with mercenary killers such as Scourges and Mandrakes, whose unique skills ensure the attack does not lose momentum.

Throughout these manoeuvres, the Kabal's aircraft will continue to criss-cross the skies, cutting enemy reinforcements to pieces before they can reach the battlefront. Should Vraesque himself take to the field at the head of his court, these aerial sentinels will be doubly vigilant. During the raid on Parcival II, the Archon was temporarily slain; upon his regeneration, the Archon personally hunted down each and every pilot who had failed him, flaying them and staking them out to dissolve amid the fumes of the Poisoned Crown.

However the Kabal of the Flayed Skull chooses to strike, it does so with a speed and precision that few foes can match. This small elite force must keep moving, keep killing and keep their prey on the back foot. In this way the raiders can wrong-foot their opponents, strike at their weak points and then fade back to Commorragh like smoke on the breeze.

The Kabalites of the Flayed Skull, as their name would suggest, take pains to cultivate an unusually savage appearance. The most notable expression of this is the blood-streaks that many Kabalites apply to their faces before every raid. This blood is their own, and has a strong ritualistic significance.

Each Kabalite will take a blade and cut deep into their own flesh, striving to cause themselves the greatest possible pain in the process. They paint the blood onto their skin, applying it in long stripes or using it to daub themselves in bloody runes of mayhem. As they perform this ritual, many will brag that their blood will not be shed again that day, for the weapons of the prey will not touch them. Of course, in the violent society of Commorragh, this blooded visage has also become the Kabal's calling card. Rival Kabals have found their strongholds sundered from the sky, the bodies of the defenders scattered about, faces painted in their own split blood. None will forget the gory fate of the Kabal of the Despairing Scream, whose severed faces decorate an entire vault of the Poisoned Crown to this day.

Equally, the Kabal of the Flayed Skull has been known to leave mementoes of this sort at the culmination of successful raids. Following the defence of Klenmann's Landing, for example, the Astra Militarum relief force found only the corpses of the PDF defenders, still posed carefully at their posts with the skin flayed from their skulls.

There are similarly barbaric flourishes exhibited throughout the Kabalites appearance. Their armour is decorated to hint at flayed skin and bone laid bare, its appearance in battle uncomfortably realistic. The hulls and sails of their vehicles are similarly adorned. The Kabal's symbol is, naturally, a ritually flayed skull. This macabre death's head is a terror weapon in itself, leaving the prey in little doubt of the horrific fate they face should they be defeated or, worse, captured by the Kabal.

Finally, the Kabalites make a great show of donning loincloths, cloaks and the like made from flayed and stitched skin. These items of clothing are often dyed rich, arterial red, the pigment itself a carefully refined blend of the blood of thousands. The best-crafted of these garments are provided by the Haemonculi of the undercity, and boast still-moaning faces that gurgle and groan in disembodied agony as their wearer moves. However, even those Kabalites that cannot afford such ostentation will stud their skin-garments with barbed hooks and rattling chains, the better to sow terror amidst the foe. Such is the horrific aspect of the Kabal of the Flayed Skull: a mantle of barbarity that has seeped into almost every aspect of its warrior's existence. Yet still their savage appearance falls short of expressing the cruelty that drives their every action.

Forces of the Flayed Skull

The Court of the Archon

The Flayed Skull Incubi of the Shrine of Splintered Bone

Flayed Skull Mandrakes, the Whispers in the Dark 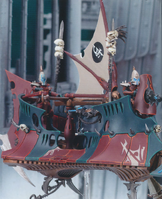 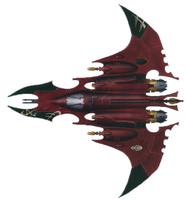 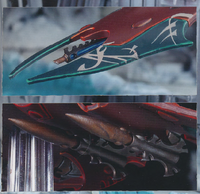 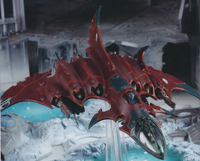 Flayed Skull Voidraven Bomber
Add a photo to this gallery
Retrieved from "https://warhammer40k.fandom.com/wiki/Kabal_of_the_Flayed_Skull?oldid=341750"
Community content is available under CC-BY-SA unless otherwise noted.