"These are not soldiers, nor warriors. This enemy is the act of murder given flesh, and they will not stop until terror is the only thing that lives."

A Kabal of the Drukhari is an autonomous military organisation that exists somewhere in the gray zone between a criminal cartel, a pirate fraternity and a noble household for that sadistic Aeldari kindred.

Their numbers are made of sadists, slavers, torturers, murderers and thieves. Kabals are in a state of constant conflict, their webs of alliances and rivalries ever­shifting in Commorragh's brutally meritocratic and labyrinthine political landscape.

Though forever set at each other's throats by the fractious nature of Drukhari society, the Kabals form the primary military strength of the Dark City of Commorragh, and are largely responsible for the constant flow of slaves upon which the Dark City feeds and depends for its people's continued survival.

The Kabals occupy the upper tiers of Commorragh's power structure, defining the martial aspect of the Drukhari and maintaining a stranglehold on all aspects of the Dark City.

Even the most minor Kabals consist of hundreds of Drukhari, though their territories may be confined to hidden locations and scattered hideouts.

The baleful influence of these monstrous coalitions stretches from one side of the galaxy to the other. The largest Kabals comprise millions of skilled Kabalite Warriors, and have galaxy-wide influence thanks to their endless stream of slave raids and rampant, blood-soaked piracy.

In the murderous society of Commorragh, Drukhari with aspirations for enormous power -- which is the overwhelming majority -- will easily make enemies and draw unwanted attention. This makes them vulnerable, and makes reaching the heights they wish to achieve almost impossible.

Thus, most Drukhari wish to join a Kabal, though competition is fierce and the initiation rites extremely bloody. Within a Kabal there is the safety of numbers and a ladder of hierarchy they can climb.

An attack on a Kabalite Warrior is seen as an attack on them all, and so a modicum of order is maintained -- Kabals will not make dangerous enemies unless they see their own position as being strong enough to withstand the potential fallout.

This does not mean, however, that particular individuals in a rival Kabal cannot, or should not, be eliminated, it just means that the way in which they are removed has to be more subtle. So does this power structure incentivise murder by subterfuge and careful scheming.

Due to the continuous stream of fresh recruits, the large quantity of a Kabal's number that are outside Commorragh on raids and the networks of escape routes and secondary bases they employ, it is almost impossible to wipe out a Kabal in its entirety.

Only Asdrubael Vect, the supreme overlord of Commorragh, has the power and influence to carry out such an action without triggering city-wide outrage or a cascade of successive skirmishes, as the webs of Kabal alliances declare war on each other in the aftermath.

Drukhari society once revolved around a small number of Aeldari noble houses. The scions of these aristocratic institutions plumbed the depths of hedonism that led to the Fall of the Aeldari. The Commorrite nobility jealously guarded their positions, seeking out and killing any who threatened them or questioned their primacy.

The central mass of Commorragh -- a mind-boggling metropolis of skyscrapers, archshrines, palatial spires and pleasure temples -- was the province of the noble houses alone. Entry could be gained only by birthright, and elitism was a way of life. So it was for several millennia after the Fall.

The society of Commorragh remained as stagnant and corrupt as its ancient masters. In all likelihood it would have continued to do so indefinitely, had it not been for a young warrior-slave by the name of Asdrubael Vect, who brought the old order of the Drukhari nobility crashing down.

Vect's own warrior-clique -- or "Kabal" -- had prepared for their founder's ascension, seeding their agents into every aspect of Drukhari civilisation throughout Commorragh and beyond.

In the wake of Vect's uprising, the fickle Drukhari adopted the Kabalite system with an enthusiasm born of self-preservation. Sensing which way the wind was blowing, even the surviving Drukhari noble houses reinvented themselves as Kabals in their own right, though in their hearts they still covet the notion of their inherent superiority because of birth as Trueborns.

Yet none can deny that the Kabalite system has gone from strength to strength. Power is no longer inherited in Commorragh, it must be fought for and taken by force. The authors of the Dark City's fate are those who wield the sharpest minds and blades alike, the precarious nature of their position ensuring complacency can never take root.

In a society as treacherous as that of the Drukhari, a single power-hungry individual soon makes enemies. It is never long before the loner finds a dagger at his throat or feels nerve-searing poison flowing through his veins.

Only those affiliated to larger organisations enjoy any degree of security; there is safety in numbers, they say, and even in the shadow-haunted twilight realms of the Dark City this remains true.

To kill a Kabalite is to commit a hostile action against an entire Kabal. Regardless of status, sect or species, few Commorrites are prepared to make such an influential enemy without good reason, and those who do must ensure they have powerful friends of their own to protect them against the inevitable vicious retribution.

Competition for Kabalite membership is beyond fierce, despite the varied and often violent initiation rites that must be undergone. The constant supply of fresh aspirants means that the Kabals themselves enjoy a kind of loose immortality.

Each has the might to make its displeasure keenly felt should it be threatened or slighted. It is unusual for an entire Kabal to be wiped out altogether.

Only the Supreme Overlord Asdrubael Vect can visit such a fate upon his enemies without triggering city-wide outrage or inviting punitive violence on a massive scale.

Yet Vect ensures that Commorragh is eternally riven by gang warfare, and not a single night goes past in the Dark City without the streets echoing to running battles between Kabalite factions -- the archons of the Kabals do not care for the notion of peers.

Though all Drukhari Kabals offer a measure of sanctuary -- from outside influences, at least -- the true prize for the established Kabalite is to take part in a realspace raid. The war with the material dimension is a never-ending campaign of extreme violence against every other sentient race in the galaxy.

A successful raid offers the victors not only the twin bounties of slaves and a feast of pain, but will also do much for the political standing of those who planned and executed it.

By impressing their fellow Commorrite citizens, a Kabal asserts dominance over its rivals.

As such, successful realspace raids are one of the most straightforward ways in which a Drukhari Kabal can rise to prominence over its rivals.

Thus, the largest Kabals are always raiding. Some may have scores -- or even hundreds -- happening simultaneously, attacking world after hapless world and winning political as well as military victories.

The most well-respected Kabals launch raids on an almost constant basis, their sleek attack craft descending upon one hapless world after another to plunder and enslave.

In the same way that Kabalite archons scheme to acquire power and outmanoeuvre their rivals, they plan their realspace raids in meticulous detail. They torture existing slaves and employ scouts and mercenaries to acquire as much knowledge as possible of the world they intend to strike.

Further, the Covens of the Haemonculi can be prevailed upon to provide stranger means of surveillance, be it Whisperglass Mirrors, flocks of invisible familiars or parasitically-invested abductees. These services always come at a price, of course, yet a successful realspace raid will normally justify the cost of such bargains tenfold.

Once a raid is launched, Kabalite forces will work to keep the foe on the back foot at all times, using superior technology and local knowledge torn from the minds of captives to stay one step ahead of the enemy.

Stand-up fights are never entered into voluntarily, for the warriors of the Kabals view concepts such as valour or honour as weaknesses to be exploited.

Their raiding parties will strike hard and fast where the foe is at its most vulnerable, aiming to cripple command and control structures, undermine logistics and spread terror and confusion. Should an organised response coalesce, the Kabalites will simply fade away and attack elsewhere, aiming above all else to avoid being pinned down in a war of attrition.

Ambush, trickery, the turning of foes against one another, and the bloody quest for personal glory -- such are the hallmarks of a Kabalite hunt. They are as much a part of the Drukhari's arsenal as advanced weapons, and they use them to full effect.

Many Kabals will have a bias towards particular methods of warfare, most often the product of their archon's personal conceits or origins. Some, such as the spaceborne Kabal of the Severed, favour great wings of attack craft that shatter and scatter the strength of their victims before a single Drukhari foot touches alien soil.

Others -- such as the Kabal of the Storm's Spite or the Kabal of the Bloody Scream -- favour the deployment of overwhelming firepower, fielding whole squadrons of Ravager gunships and murderous flocks of Scourge mercenaries who pick the foe apart from a distance.

Conversely, a great many Kabals prefer to get in close, fighting where they can feel every hot splash of blood and hear every last rattling breath.

Kabals such as the Kabal of the Shuddering Blade and the Kabal of the Silver Fang are especially well known for orchestrating such bloodbaths, and competition is fierce to accompany them to the field of battle.

Perhaps the strangest of all are the Kabal of the Thirteenth Whisper, whose members keep their faces shrouded at all times and who are reputed to traffic heavily with the Mandrakes of Aelindrach.

Raids by this Kabal are nightmarish affairs, tides of shadow proceeding their advance while chill-eyed horrors stalk the darkness with blades in hand.

Hierarchy of a Kabal

A Drukhari Kabal has a very strict hierarchy. In order from highest-ranking to least, these ranks include the following:

Icon of the Kabal of the Baleful Gaze

Icon of the Kabal of the Black Myriad

Icon of the Kabal of the Black Heart

Icon of the The Broken Sigil

Icon of the Kabal of the Last Hatred

Icon of the Kabal of the Obsidian Rose

Icon of the Kabal of the Dying Sun

Icon of the Kabal of the Flayed Skull

Icon of the Kabal of the Poisoned Tongue

Icon of the Kabal of The Lords of The Iron Thorn

Icon of the Icon of The Severed 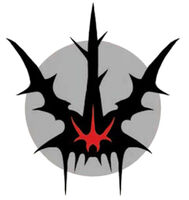 Icon of the Kabal of the Shadowed Thorns 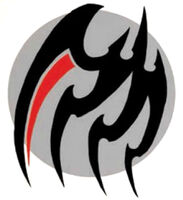 Icon of the Kabal of the Splintered Talon

Icon of the Kabal of the Wraithkind 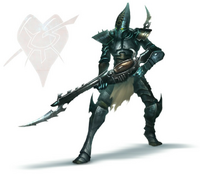 A Kabalite Warrior of the Kabal of the Black Heart 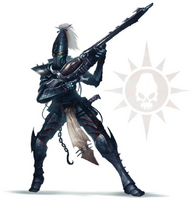 A Kabalite Warrior of the Kabal of the Dying Sun 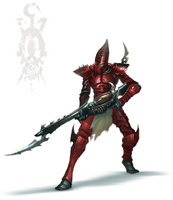 A Kabalite Warrior of the Kabal of the Flayed Skull 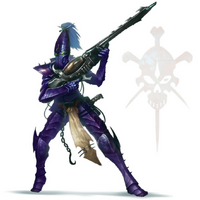 A Kabalite Warrior of the Kabal of the Last Hatred 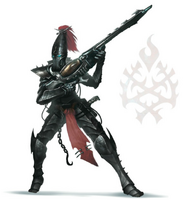 A Kabalite Warrior of the Lords of the Iron Thorn 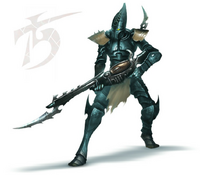 A Kabalite Warrior of The Broken Sigil 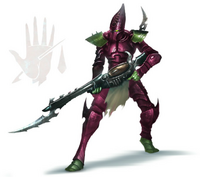 A Kabalite Warrior of The Severed

A Kabalite Warrior of the Kabal of the Baleful Gaze

A Kabalite Warrior of the Kabal of the Bleaksoul Brethren

A Kabalite Warrior of the Kabal of the Fiend Ascendant

A Kabalite Warrior of the Kabal of the Obsidian Rose

A Kabalite Warrior of the Kabal of the Poisoned Tongue

A Kabalite Warrior of the Kabal of the Slashed Eye

A Kabalite Warrior of the Kabal of the Wraithkind
Español
Community content is available under CC-BY-SA unless otherwise noted.
Advertisement