The T'au KX139 Ta'unar Supremacy Armour is larger than any other current class of T'au Battlesuit. It is intended to meet a threat that the T'au Empire has not yet prepared for; the defence of worlds within their growing domain from the counter-expansion forces of other starfaring species like Mankind. Lacking the manoeuvrability of other Battlesuits, the KX139 Ta'unar Supremacy Armour was designed for static defence; carrying massively destructive, long range weapons.

When encountering increasing numbers of enemy heavy assault elements, from Imperial Knights to the towering alien monstrosities of the Tyranid Hive Fleets, T'au heavy flyers were often outclassed. Earth Caste engineer Fio'o Ke'lshan Sho'aun developed the KX139 to mount a dynamic yet stoic defence against such foes, engaging them at range and dominating the battlefield.

As standard, a KX139 mounts a large triple-barrelled Pulse Ordnance Multi-Driver on its back as its powerful main weapon, which it can use to engage enemies at range and destroy even Titan-sized targets. This can be swapped out in exchange for either a Nexus Missile System or a Heavy Rail Cannon and Fragmentation Cluster Shell Launcher, as the Battlesuit's primary weapon.

On each of its arms a KX139 mounts a Tri-axis Ion Cannon, both of which can be exchanged instead for Fusion Eradicators.

Whilst its main weapons take on enemies at extreme long-range, the Supremacy Armour's Vigilance Defence System incorporates two Smart Missile Systems and two twin-linked Burst Cannons that can deal with foes at close quarters, including infantry brave or mad enough to charge at the towering Battlesuit. The KX139's Barrier Shield Generator provides it with enhanced protection, even from the devastating weapons mounted on Imperial Titans. 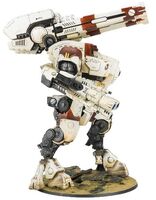 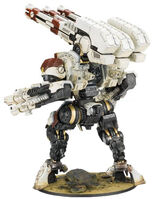