The Justaerin were one of two distinct sub-formations within the elite 1st Company of the Luna Wolves and later the Sons of Horus Legion.

Led by the Legion's First Captain Ezekyle Abaddon, the Justaerin were the pride of the XVIth Legion, sporting their signature black armour, which denoted their specialisation in harrowing actions, shock assaults and strategic decapitation strikes. Tasked with forming the "point of the spear" for the XVIth Legion, they went where the fighting was thickest, their attack directed usually at destroying the heart of an opposing target or conducting the decapitation strike of an enemy force.

Early proponents of the use of Tactical Dreadnought Armour, many Justaerin entered combat as Terminators, relying on the resilience this gave them to smash aside any resistance and close in for the kill.

A Justaerin Veteran wearing singularly-modified Cataphractii Pattern Terminator Armour and armed with a Combi-Bolter and a Cthonian Pattern Power Axe. 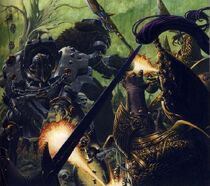 Two Justaerin Terminators fight against warriors of the Legio Custodes.
Español
Community content is available under CC-BY-SA unless otherwise noted.