A Jump Pack is a bulky, man-portable, vectored-thrust jet pack fueled by Promethium that can be worn by a single soldier, designed to be attached to the backpacks of the Space Marines' or the Sisters of Battle's suits of Power Armour. They are used to make powered jumps across the battlefield, allowing the warriors wearing them to cover ground quickly and unexpectedly drop into the midst of their foes to launch a close-combat assault.

Unlike the other equipment used by the Space Marines, such as Assault Bikes, main battle tanks and Terminator Armour, Space Marine commanders do not use Command Squads that are equipped with Jump Packs. The exception to this general rule can be found in Astartes forces that are particularly oriented towards the use of assault tactics, such as the Blood Angels Chapter.

The use of a Jump Pack by Assault Marines is often paired with the ubiquitous Chainsword or some type of Power Weapon and Bolt Pistol, as the pack's ability to traverse great distances makes the use of long-ranged weapons pointless.

Developed in the Age of Technology, the Jump Pack used by the Adeptus Astartes is a bulky, thrust-vectoring rocket engine worn upon the back. A Space Marine so equipped can make bounding jumps to quickly close with the foe, leaping high over the most hazardous terrain to close upon a foe at great speed and launch unexpected close combat assaults.

Such troops often deploy via airborne craft, leaping from Stormravens or other Adeptus Astartes aircraft. Then, using controlled bursts from their Jump Packs, they guide themselves downwards to strike where they can do the most damage, whether that be some vulnerable point deep behind enemy lines or straight into the heart of the opposing forces.

Most Space Marine Chapters employ close support squads equipped with Jump Packs, but some Chapters, like the Raven Guard, are known to deploy Bladewing Assaults -- entire Jump Pack formations that swoop down to strike with the surety of eagles on the hunt.

Among the Primaris Space Marines, the assault role is carried out instead by Inceptor Squads, who wear Mark X Gravis Power Armour. The Jump Pack of Mark X Gravis armour is fully integrated into the rest of the suit, unlike the prior patterns of Jump Pack used by standard Astartes Assault Marines, who wear it separately over their earlier marks of Power Armour.

Based on ancient STC technology, Jump Packs are a form of archeotech most likely developed during the Dark Age of Technology. At the time of the Great Crusade and the Horus Heresy elite Jump Pack-equipped Assault Companies within the Legiones Astartes were considered rare and highly valued Imperial troops. At that time Jump Packs were a rarity, and they were usually only issued to elite units of Space Marines.

These earlier patterns of Jump Pack were rather more sophisticated and efficient than the ones commonly used by the Space Marines of the Imperium in the 41st Millennium, being considerably lighter and less bulky, while at the same time having a higher thrust-to-mass ratio which allowed slightly longer and higher jumps to be performed.

Such was their complexity, however, that only the most skilled Tech-adepts of the Mechanicum could attempt their construction, and with time even this ability was lost, so now all that can be done is to maintain those packs that still remain.

If it had not been for the discovery of the Standard Template Construct (STC) for the pattern of Jump Pack currently used by the Imperium (by an unknown Tech-priest on the backwater planet known only as DH2), it is likely that the Chaos Space Marine Raptors would have been the only Space Marines still using Jump Packs in the 41st Millennium.

The Jump Pack is affixed to a warrior in Power Armour, drawing energy from the suit's own power pack to augment its high speed motors. Intake vents on the top of the pack greedily suck in air to feed the jets, while the turbine blades expel a long plume of vapour. Even with the aid of the power armour's energy coils the jump pack has its own fuel supply, such is the power required to send a fully armed and armoured seven-foot tall warrior into the sky.

A Jump Pack is usually good for a dozen or so "jumps" before it must be refuelled or discarded. This is usually enough to get a Space Marine into the fray, or allow him to descend from the sky, striking deep behind enemy lines. An empty Jump Pack can be a liability, and even with his prodigious strength a Space Marine can find it impedes his ability in combat.

For this reason, the Jump Pack commonly incorporates a quick-release mechanism on the Battle-Brother's chest plate. Keyed to his specific power armour gauntlet, it is a lock that can be opened with a touch, allowing him to shrug free of the pack in moments.

Though Jump Packs are an ancient technology that has served the Adeptus Astartes for millennia, the Space Marine Chapters of the present limit their use to specialist formations within each company. In battle, these Assault Marines are ideal for striking at the flanks of the enemy or hitting behind their lines. Many Heretics and foul xenos have met their end at the hands of jump pack equipped Space Marines, their final moments watching transfixed as armoured warriors descend from the sky on shimmering vapour trails.

Jump Packs are also used to make high altitude battlefield insertions, where Assault Marines will leap from Stormraven gunships or other Space Marine aircraft, their packs slowing their fall at the last moment. Space Marines can also use their packs to leave battle in the same way, leaping up straight into the air and into hovering transports or even grabbing onto the side of a Land Speeder or Stormraven as it screams across the battlefield.

In this way, a Space Marine with a Jump Pack can throw himself out into space in the upper atmosphere of a world, guide himself down through swirling clouds and enemy fire to come crashing to ground near a high priority target. Then, once he has destroyed his target with either a well-placed melta-charge or several blows of his Chainsword, he can leap once more into the sky, vanishing into the fog of war before the enemy has even reacted to his arrival.

Many Space Marine commanders personally favour the use of a Jump Pack, especially those that seek out personal combat with the foe. A Jump Pack allows such a hero to leap across the battlefield far faster than he could run, ensuring he is always in the thick of battle. Nowhere is safe from the Space Marine hero, and he can use his pack to leap up onto battlements, over massed enemy formations and past formidable trench-works with equal ease. If the hero can see his foe then he can reach them, and with a roared challenge can charge upon wings of smoke and fire.

Jump Packs are a symbol of the might of the Adeptus Astartes, and many are ornately crafted with intricate gilt-work or even unfurled wings. The sight of scores of power-armoured giants arcing over a battle is an awe-inspiring sight, enhanced by the image of glowing wings and billowing clouds of fire upon which the warriors seem to walk. An enemy witnessing such a grand and terrible vision can be left with no doubt he faces the Angels of Death. 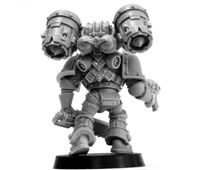 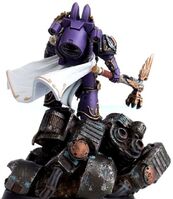 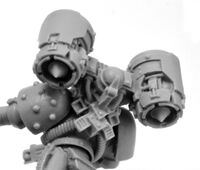 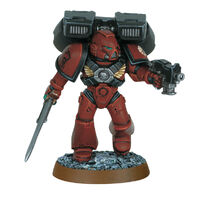 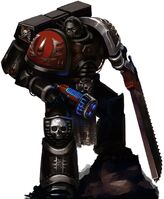 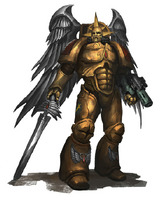 Brother Donotriel, a Sanguinary Guard of the Blood Angels Chapter wearing their trademarked winged Jump Pack. This modified version of the standard Astartes Jump Pack is designed to emulate their Primarch Sanguinius' own angelic wings. 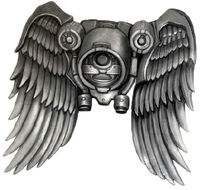 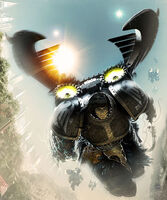 Corvus Corax, Primarch of the Raven Guard Legion leading an aerial assault, wearing his Artificer-wrought Korvidine Pinions, a Jump Pack that was a miracle from the Dark Age of Technology modified to suit the Primarch's own exacting needs 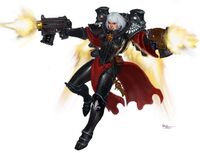 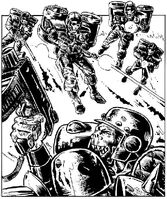 An ancient Remembrancer's depiction of Jump Pack-equipped Imperial Army troopers assaulting an Ork position during a xenocide campaign during the Great Crusade
Add a photo to this gallery
Retrieved from "https://warhammer40k.fandom.com/wiki/Jump_Pack?oldid=348055"
Community content is available under CC-BY-SA unless otherwise noted.