A Jetbike is a fast and highly maneuverable vehicle that is powered by advanced anti-gravitic technology that allows it to hover above any surface while being propelled by powerful jet or rocket engines.

These sleek vehicles can be used to carry a passenger into the air above the maelstrom of battle or to carry out missions like reconnaissance or hit-and-run attacks that require a high degree of speed and mobility.

There were several different patterns of Jetbike used by the Imperium of Man over the centuries, and the most common patterns are usually armed with some type of anti-personnel weapon such as a Heavy Bolter or a set of twin-linked Bolters that are synchronised to fire simultaneously. These weapons can lay down a withering hail of fire against lightly armoured targets.

In the late 41st Millennium, this archaic technology is virtually extinct within the Imperium, but Jetbikes are still widely employed by the Aeldari and their Drukhari kin.

Jetbikes are a nearly extinct form of archeotech that dates back to the earliest days of the Imperium of Man. During the Horus Heresy, many Space Marine Legions as well as other Imperial military forces, such as the Legio Custodes and the Sisters of Silence, also fielded Jetbikes.

These gravity-impellor assisted, jet engine-propelled hovercraft were more akin to compact aircraft than ground-based Assault Bikes and were able to maintain great speeds for extended periods of low-altitude flight.

Their lift-strength was sufficient not only to carry a heavily armoured Space Marine and his wargear aloft, but also to transport a variety of heavy weapons mounts and stocks of ammunition, giving the Astartes and other Imperial personnel who used them extremely potent firepower as well as excellent maneuverability.

The Jetbike patterns in service with the Legiones Astartes were modifications of designs which considerably predated the Imperium and given the materials required to make and maintain them (such as the iridium-calicite alloys needed to fabricate the hyper-efficient anti-gravitic suspensor/repulsor plates required for flight), demand for them by the Legions always outstripped the supply provided by the Mechanicum.

The last known Jetbike pattern that was built by the Imperium was the Mark XIV Bullock Pattern Jetbike, which was equipped with an integrated auto-drive as well as other additional specialised capabilities such as auto-targeters linked to the vehicle's weapons, an Auspex, and an extensive suite of sensors capable of differentiating between biological lifeforms and inorganic energy emissions.

Imperial Jetbikes were capable of both in-flight and hover modes. In combat, Imperial Jetbikes could be deployed by aerial-drop separation, a technique where a Jetbike would be dropped from a Stormbird while the aircraft was still in the sky.

These formidable and sleek craft allowed their riders to soar at great speed across the battlefield, held aloft by archaic anti-gravitic technology lost to the Tech-priests of the Adeptus Mechanicus in the 41st Millennium.

In the present of the late 41st Millennium, Jetbikes are rarely, if ever, utilised by the Chapters of the Adeptus Astartes and their use is now entirely unknown to the units of the Astra Militarum. Those few Chapters that are fortunate enough to maintain some examples of this bygone technology are privileged to ride to war on ancient machines painstakingly maintained since the days of the Great Crusade.

Armed with ferocious twin-linked Bolters or a Plasma Cannon, the Imperial Jetbike is feared by the Space Marines' foes. One of the last known examples of an Imperial Jetbike is maintained by the elite Ravenwing (2nd Company) of the Dark Angels Chapter, which possesses a single Venerable Jetbike which is utilised by its Grand Master Sammael. Sammael is able to launch lightning fast assaults and ride down the enemies of the Chapter from astride his ancient steed.

It is known that during the White Scars' campaign of extermination against the remnants of the Ork empire of Overlord Urrlak Urruk, who had been conquered by the Emperor of Mankind and Horus during the Ullanor Crusade, the V Legion had no less than 500 Bullock Pattern Jetbikes in its possession.

One of a number of customised Jetbike designs utilised by the Legio Custodes Agamatus Jetbike Squadrons, the heavy duty, plasma motor-boosted Gyrfalcon Pattern Jetbike served as the Custodes' steeds in battle.

The increased power of the design supported not only the heavily armoured Custodian Guard, but also allowed it to mount a powerful Iliastus Pattern Bolt Cannon as its on-board armament. The Gyrfalcon was more powerful even than the Scimitar Pattern associated with the Legiones Astartes, a heavy-design more akin to an armoured one-man speeder than a true Jetbike.

In addition, its augmented grav-repellor system combined with a plasma-thrust motor provided tremendous temporary bursts of speed. The Agamatus Squadrons of the Legio Custodes exploited these war machines to operate as both a rapid response and suppression unit in the field.

The Dawneagle Pattern Jetbike is an incredible vehicle, a Great Crusade-era relic wrought in auramite and adamantium. These bikes are almost as large as light fighter craft and -- while they are still grav-skimmers -- can deliver a near supersonic turn of speed.

Their hulls are phenomenally durable, allowing their riders to slam through walls and enemy warriors without being unseated, and they react pugnaciously to the slightest touch of the controls, able to jink effortlessly through incoming fire.

When armed with Hurricane Bolters, the Dawneagle can plough bloody furrows through enemy hordes. However, it is when equipped with Salvo Launchers that Vertus Praetors truly come into their own as lightning-fast tank hunters.

They scream across the battlefield, rapidly outflanking and encircling the heaviest enemy vehicles before annihilating them with strafing runs of Melta Missiles.

Even enemy aircraft are not safe, for by combining their fire the Vertus Praetors of the Adeptus Custodes who are the exclusive users of the Dawneagle are able to weave airborne webs of flakk blasts into which hurtling enemy aircraft slam with terminal results.

The Scimitar Pattern Jetbike was a relatively common pattern of Imperial Jetbike that was used by the Space Marine Legions during the Great Crusade and later in the Horus Heresy.

The Scimitar Pattern Jetbike was armed with a single spinal-mounted Heavy Bolter, but was also able to be armed with a Multi-Melta, a Plasma Cannon, or a Volkite Culverin. These Jetbikes were usually organised into fearsome Sky Hunter Squadrons by the Legions and used as powerful fast strike units.

These squadrons were so effective that they were used in some capacity by almost all the Space Marine Legions. Due to the Jetbike's extreme speed and mobility and its ability to carry heavy weaponry, it was not uncommon for these squadrons to range far ahead of the main strength of a Space Marine force, striking targets of opportunity at will.

The Shamshir was a rare variant of the Scimitar Jetbike employed by the White Scars Legion for its increased speed and manoeuvrabilty.

Production of this variant Jetbike was limited to small Mechanicum enclaves established in the Kolame Circle and maintained by ancient treaty with the White Scars and their enigmatic Primarch Jaghatai Khan.

Jetbike Chariots were a variant of the Jetbike that featured a platform on the rear of the Jetbike where an Astartes could stand. The Astartes on the back could make use of his weapons while the Jetbike's driver focused on piloting the craft.

The platform was surrounded on three sides by armoured plate, giving the passenger some degree of protection from enemy fire.

The Sojutsu Pattern Voidbike is an early prototype Imperial Jetbike that predates the more common Scimitar Jetbike in common use with the Legiones Astartes during the Great Crusade and Horus Heresy eras.

During initial trials its thrusters were capable of providing sufficient thrust to grant the bike limited periods of true flight, and even some manoeuvrability in deep space, and it was classed by the Logisticae Imperialis as an ultralight fighter craft instead of a Jetbike.

The Sojutsu Voidbike was the favoured mount of the White Scars Legion's Primarch Jaghatai Khan.

There are many different patterns of the Imperial Jetbike, and many of these patterns remain a mystery to Imperial scholars and Adeptus Mechanicus Magi.

The Jetbike was widely used by the Imperium of Man during the Great Crusade and Horus Heresy, and found users amongst the Space Marine Legions, the Legio Custodes, the Sisters of Silence the Mechanicum of Mars and even in small numbers by the Imperial Army, so many different patterns and sizes of Jetbikes are thought to exist. There are several unnamed patterns of the Jetbike known to the Imperium, which include the following:

Although the Imperium of Man has lost the technology and ability to produce Jetbikes there are others that make use of their other Jetbikes, most notably the Aeldari and their Drukhari kin. Examples of these xenos Jetbikes include the following.

The Aeldari are the undisputed masters of anti-gravitic technology in the Milky Way Galaxy, and their Jetbikes are a swift moving force that is justifiably feared by any who have faced them.

Aeldari Jetbikes are ideal for carrying out raids on unsuspecting enemies, allowing their riders to strike without warning from behind dense terrain before using their superior speed and handling to escape.

Each of these deadly vehicles are armed with Shuriken Catapults that are synchronised to fire simultaneously, or a single deadly Shuriken Cannon. Aeldari Craftworld Guardians and the Shining Spears Aspect Warriors most commonly make use of Aeldari Jetbikes.

Reavers are those Drukhari fascinated by bringing death to others at high speeds. They ride to war upon the most streamlined and pared-down of all Aeldari skycraft, the Reaver Jetbike.

These sleek vehicles are highly customised and extremely variable in their configurations, with the frontal canopy, rear canards and keel blades all shaped into different, but equally lethal, forms.

It is unknown if these differing formations actually aid a Reaver Jetbike's combat performance and maneuverability or are simply aesthetic choices made by the individual Reaver. The standard primary armament for a Reaver Jetbike is a Splinter Rifle mounted on the hull, which can be upgraded to a Shredder, Blaster or Heat Lance.

Some Drukhari, particularly the more successful Reavers, add Cluster Caltrops and a Grav-Talon which are intended to destroy pursuers in the air or on the ground and are equally adept at slamming opponents into the walls of a toroid arena in the High City of Commorragh or onto the dusty surface of a planet.

A Reaver Jetbike is equipped with Turbo Boosters that are always engaged by the rider before he attempts to use his craft's Bladevanes to slash apart opponents on the ground.

The technical specifications for the ancient patterns of Imperial Jetbike have not been released by the Adeptus Mechanicus. 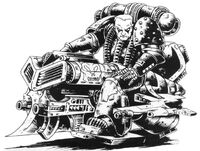 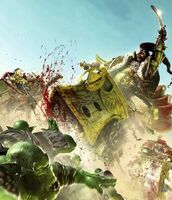 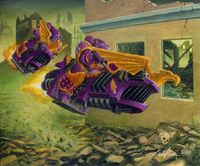 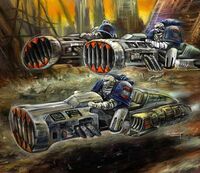 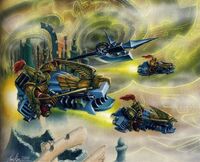 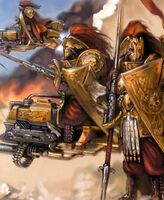 A Legio Custodes Praetorian Jetbike Squadron during the Great Crusade

A Scimitar Pattern Jetbike of the Dark Brotherhood; note that this Jetbike was encountered by Loyalist forces in several war zones across the Pale Stars region; the unidentified rider is believed to have been a former White Scars Astartes of the so-called "Brotherhood of the Foresworn".

A Scimitar Pattern Jetbike of the Raven Guard Legion

A Scimitar Pattern Jetbike of the World Eaters Legion

A Scimitar Pattern Jetbike of the Word Bearers Legion

A Jetbike Chariot of the Emperor's Children during the Horus Heresy 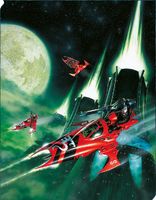 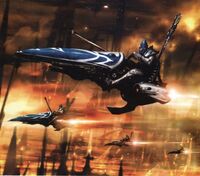