The Javelin Attack Speeder, also known simply as the Javelin, is an advanced pattern of anti-gravitic skimmer vehicle dating back to the 30th Millennium that is similar to the Land Speeder commonly employed in the late 41st Millennium by the Adeptus Astartes. The Javelin is larger and more heavily armed and armoured than the more common Land Speeder. The Javelin's gravitic nullification plates, the secret of whose production and maintenance have long since been lost, allow the vehicle to mount an array of heavy weaponry more akin to that found on a heavy tank destroyer rather than a nimble skimmer. These advanced anti-gravitic plates allow the Javelin to make pinpoint strikes on enemy armour or infantry with devastating Lascannon or missile barrages.

The Javelin is a nigh-irreplaceable relic vehicle that makes use of technologies originally designed during the earlier bygone age of technological mastery known as the Dark Age of Technology. The Javelin itself was first designed and manufactured for the Space Marine Legions by the Mechanicum during the Emperor's Great Crusade in the late 30th Millennium. The capacity to manufacture the Javelin, along with so much else from that tumultuous period of Mankind's history, has been lost to the present-day Imperium of Man. Only those Chapters of Space Marines that can trace their origins back to the First Founding still possess a few justly revered Javelins within the sanctified depths of their armouries. The Javelin is also available in small numbers to the Chaos Space Marine Traitor Legions and warbands that trace their lineage back to the time of the Horus Heresy.

The Javelin is a fast attack anti-gravitic skimmer used by the Adeptus Astartes in a role similar to that of the more common Land Speeder. However, unlike the Land Speeder, the Javelin mounts heavy anti-armour weaponry that it uses to engage enemy armoured vehicles and heavy infantry. The Javelin is armed with either a set of twin-linked Cyclone Missile Launchers or Lascannons as its main weapons. These weapons are located on the vehicle's flanks. The Javelin is also armed with a pintle-mounted Heavy Bolter that is used for close-range protection from enemy infantry. The pintle-mounted Heavy Bolter can be replaced with either a Heavy Flamer or a Multi-Melta. The Javelin can also be outfitted with a searchlight and up to two Hunter-Killer Missile Launchers for added firepower. 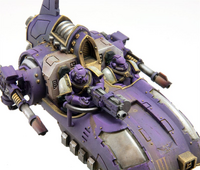 A Javelin Attack Speeder of the Emperor's Children Legion, rear-view

A Javelin Attack Speeder of the Raven Guard Legion, side-view

A Javelin Attack Speeder of the Raven Guard Legion adjacent to a Rhino for size comparison
Add a photo to this gallery
Retrieved from "https://warhammer40k.fandom.com/wiki/Javelin_Attack_Speeder?oldid=178379"
Community content is available under CC-BY-SA unless otherwise noted.