Iybraesil is one of the lesser-known Eldar Craftworlds. Being located close to the Eye of Terror, the Eldar of Iybraesil constantly wage war against the Forces of Chaos in their quest to secure both Spirit Stones and any lost technology of the ancient Eldar empire on the long lost Crone Worlds deep within the Eye.

The world-rune of Iybraesil, known as "Wisdom of Pain" and also the "Hand of Heg", is a reference to the Eldar myth wherein Morai-Heg, the Crone, persuaded the war god Khaela Mensha Khaine to sever her hand so that she could drink of the wisdom of her own blood. The Eldar of Iybraesil make frequent references to this act, claiming that no knowledge is truly claimed without sacrifice.

Iybraesil is structured around a largely matriarchal Craftworld society, fostering many Howling Banshees shrines and female Autarchs. Craftworld Iybraesil includes more female warriors within its ranks than any other. For Terran millennia uncounted, the Howling Banshees have formed the vanguard of Iybraesil's warhosts, falling upon their foes amid a cacophony of paralysing war cries.

The legends of Iybraesil tell of a pact their ancestors made with the goddess Morai-Heg. Seven times seven of Iybraesil's warrior women became the Crone's deathly handmaidens so their sisters might enjoy especially long and fruitful lives free of her cursing touch. The Craftworld has a disproportionately high female population to this day.

In these dark times, the people of Iybraesil are driven to hunt for Crone Worlds, the original homeworlds of the lost Eldar Empire which now resides within the Eye of Terror, for the Eldar of Iybraesil hope to secure not only the Tears of Isha, but also ancient technologies and doomsday artefacts with which to tip the balance of fate. Dutiful and fierce, the gifted Seers of the Craftworld labour long in their hunt for the hidden secrets of the Crone Worlds.

The grey-blue of Craftworld Iybraesil is said to represent the limpid scrying pool of Morai-Heg, the pure white her piercing third eye, and the arterial red the blood she drank from her own wrist for the hidden knowledge contained therein.

To its people, this trinity of colours represents the inextricable link between wisdom and sacrifice. Iybraesil's obsession with the Crone Worlds has also meant that the waystones harvested by them are often of a particularly rare quality.

An Eldar Guardian of Craftworld Iybraesil 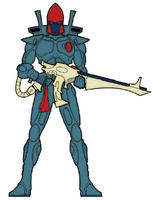 An Eldar Guardian of Iybraesil wearing some of the colours sacred to them: grey-blue and arterial red
Add a photo to this gallery
Retrieved from "https://warhammer40k.fandom.com/wiki/Iybraesil?oldid=341777"
Community content is available under CC-BY-SA unless otherwise noted.