Warhammer 40k Wiki
Register
Don't have an account?
Sign In
Advertisement
in: I, Chaos, Dead World,
and 5 more
English

None (Currently) / Imperium of Man (Pre-Heresy)

Aptus Non
Istvaan III, also spelled as Isstvan III in Imperial records, was an Imperial Civilised World in the Istvaan System of the Segmentum Obscurus.

Its population was destroyed by a virus-bombing ordered by the Warmaster Horus during a major deployment of Space Marine Legion forces at the end of the Great Crusade in 005.M31 at the Battle of Istvaan III. This action had been ordered by Horus against his own Astartes troops deployed to the surface of Istvaan III.

The internecine battle that followed between the Sons of Horus, Emperor's Children, World Eaters and Death Guard Traitor Legions and their own Loyalist elements within the ruins of the planetary capital Khry Vanak (translated as the "Choral City" into Imperial Low Gothic) was the first overt sign of Horus' turn to Chaos, and the first battle of the Horus Heresy in the early 31st Millennium.

The Istvaan III Atrocity, also known as the Battle of Istvaan III, began when Baron Vardus Praal, the Imperial Planetary Governor of Istvaan III and the rest of the Istvaan System, had risen in revolt against the Imperium of Man after being corrupted by the servants of Slaanesh, who had long maintained a presence amongst the people of the Istvaan System. The Emperor and the Council of Terra, ignorant of the change in Horus, charged the Imperial Warmaster with crushing this rebellion. Under his command were four Space Marine Legions and their Primarchs; his own Sons of Horus, the Emperor's Children of Fulgrim, Mortarion and his Death Guard, and the World Eaters led by Angron. Horus and these Primarchs had already fallen to Chaos and took this opportunity to purge all the remaining suspected Loyalists from their Legions.

All of the suspected Loyalists in the Traitor Legions were deployed with Drop Pods upon Khry Vanak, the planetary capital of Istvaan III, which translated to the "Choral City" in Imperial Low Gothic. Not allowing the Loyalists to use the traditional Stormbirds, and cutting their communication lines to the fleet after their deployment, Horus tried to ensure that none of the Loyalists would survive. After the landing, as the battle still raged, Horus ordered a massive virus bombardment upon the planet. However, Captain Saul Tarvitz of the Emperor's Children, working on a terrible hunch, had managed to remain in the fleet. To his horror, he discovered the planned bombardment and managed to seize a Thunderhawk and make his way to the planet's surface to save his betrayed brethren. The virus bombardment caused 8 billion deaths among the inhabitants of Istvaan III, and every Loyalist Space Marine who could not reach shelter in time also fell to the virus, which utterly consumed all organic matter upon the planet. Thanks to Tarvitz's warning, a few hundred Loyalist Space Marines managed to survive the bombardment inside airtight bunkers, buildings and bomb shelters. As the putrid gases, mostly methane, resulting from the rapidly decaying organic matter filled the world's atmosphere, Horus' battle barge fired upon the world and ignited a firestorm on the planet which melted its hives and razed the cities to the ground. The psychic death scream of the 8 billion people of Istvaan III is said to have been brighter than the beacon of the Astronomican for the psychically aware.

Despite this massive destruction, many Loyalists of the four Traitor Legions managed to survive the global inferno, and an enraged Angron, acting against Horus' orders, led his Legion to the surface to slaughter the survivors. Horus, trying to salvage the situation, sent detachments of all his Traitor Legions to slay the Loyalists rather than unleash an orbital bombardment that would kill the World Eaters and make a lasting enemy of Angron. The Loyalists, fighting tenaciously, turned the planned slaughter into a full-scale battle that lasted for over two standard months, largely because of the massive global hurricanes that came in the wake of the firestorms and prevented the Traitors from landing reinforcements or their heavy weapons. Under the command of Captains Garviel Loken and Tarik Torgaddon of the Sons of Horus, Saul Tarvitz of the Emperor's Children, and Ehrlen of the World Eaters, the Loyalists were able to mount a surprising defence in the ruins of the world's capital. Ultimately, the Loyalists were completely crushed, in part due to the betrayal of Captain Lucius of the Emperor's Children and the orbital bombardment of the ruins of the Choral City, but the Loyalists' actions made Horus and the Traitor Legions pay dearly for their victory and slowed down the advancement of their ultimate plans. The battle lasted for three months and inflicted huge losses upon the Traitor Legions. It proved a pyrrhic victory at best for Horus and the Traitors and one that would go a long way towards ultimately ensuring the Traitor Legions' defeat.

While the battle raged upon the planet, a handful of Loyalists led by Battle Captain Nathaniel Garro of the Death Guard managed to commandeer a vessel, the Death Guard frigate Eisenstein. The Eisenstein quickly fled into the Warp, and Garro eventually managed to warn the Emperor of Horus' betrayal. Horus next prepared a trap for the Loyalist Legions he knew would be sent to confront him by the Emperor on the planet Istvaan V, which proved far more successful and would effectively knock three entire Loyalist Space Marine Legions out of commission for the duration of the long conflict to come.

The Second Death of Istvaan III

Thousands of Terran years after the Istvaan III Atrocity, Istvaan III had been reduced to a broken, Dead World. Yet a single one of the Loyalist Astartes who had been betrayed by Horus was still alive in a collapsed hangar deep beneath the Precentor's Palace -- Ancient Rylanor, a Venerable Dreadnought and the Ancient of Rites of the Emperor's Children Legion. Badly wounded in the final days of the battle against his Traitor brethren, Rylanor had taken refuge in the collapsed hangar because there he had discovered an unexploded Virus Bomb.

Driven mad by the passing centuries, the Dreadnought used the remains of the Traitor Emperor's Children Sonic Weapons to craft an interstellar beacon designed to lure his former Primarch, Fulgrim, back to Istvaan III in an attempt to slay him. While the beacon also drew a group of curious Thousand Sons Heretic Astartes from the Planet of the Sorcerers, it did succeed in ultimately drawing Fulgrim back to the long-dead world.

But Fulgrim was no longer just a Primarch, he was a serpentine Daemon Prince of Slaanesh, a walking embodiment of malice and pride. Rylanor detonated the bomb when the overconfident Daemon Primarch ripped the remains of his organic form from his cybernetic sarcophagus. One of the Thousand Sons Astartes, a member of the Raptora Cult, used a potent kine shield to contain the blast, but another of the Sorcerers, Vistario, utterly disgusted by what Fulgrim had become, killed his companion and allowed the psychic shield to drop.

Once more, all life burned on Istvaan III. It took much less time for the Life Eater virus to burn out on Istvaan III's second death. Yet, not long after, a shadow emerged from the undercity, a serpentine outline of cinders, held together by a web of daemonic energy.

Not even the viral toxins wrought by ancient science could unmake that which the darkest powers of the Warp had raised up. The Phoenician's form was already weaving itself anew, but his soul was broken. For no pain, no hurt and no injury could wound such a being as much as the denial of its magnificence. That simple truth was Ancient Rylanor's final victory.

The star system and planet's name is alternatively spelled Isstvan in many Imperial sources. 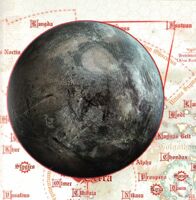 Bereft of all life, Istvaan III is left as nothing more than a mass necropolis after the Istvaan III Atrocity
Español
Community content is available under CC-BY-SA unless otherwise noted.
Advertisement