An Irradiation Projector, also known as a Rad-Cleanser or Irad-Cleanser, is a class of projected radiation devices used as potent anti-personnel weapons. These weapons were a relic from the Dark Age of Technology and were used exclusively by the forces of the Mechanicum, particularly during the Great Crusade and Horus Heresy eras of the late 30th and early 31st Millennia.

Any type of Irradiation Projector is commonly comprised of a bulky generator unit that terminates in a dish-like projector that unleashes a powerful blast of deadly cross-spectrum radiation. Any organic victims caught in the blast of such a weapon suffer an appalling death as they are boiled alive from within -- their tissues blasted apart on a cellular level by the potent ionising radiation. While thick barriers of solid matter between the beam and the target can provide some protection, victims who survive the initial blast will often die later of extreme radioactive contamination.

The following are all known types of Irradiation Projectors that were once used by the ancient Mechanicum: 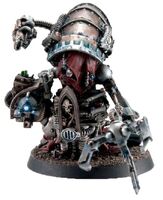 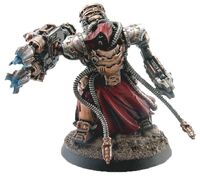 A Myrmidon Destructor armed with a Irradiation Engine

A Macrocarid Explorator armed with two Irradiation Engines
Add a photo to this gallery
Retrieved from "https://warhammer40k.fandom.com/wiki/Irradiation_Projector?oldid=314944"
Community content is available under CC-BY-SA unless otherwise noted.