The Iron Lords is a rare Successor Chapter of the venerable Iron Hands, created during an unknown Founding.

The Iron Lords are known for their exceptionally stern demeanor and absolute and commendable hatred for all xenos life.

The Iron Lords have vowed in the name of the Emperor to prevent this at all costs, a vow they will honour with the life of every battle-brother in the Chapter if needs be. But the Iron Lords have suffered greatly in upholding this oath.

The Grendl Stars are a constellation of stars located on the far Eastern Fringe of the Milky Way Galaxy in the Imperium Nihilus. The region was once known as the "Wings of Sanguinius" and is sometimes referred to as "the Fourteen". The region is known to harbour the hyper-violent xenos race called the Barghesi.

The Iron Lords have proved instrumental in confining the Barghesi to the Grendl Stars for the last three thousand standard years, and also in preventing the destructive biological potential of the species from being harvested by the Tyranids' Hive Fleet Kraken.

The Barghesi are held within the Iron Lords' "Iron Grip" pending the massing of Imperial forces with strength enough to exterminate the Barghesi forever. No such Imperial Crusade has been forthcoming, and with the birth of the Great Rift, now seems all but impossible.

The Grendl Stars are surrounded by Imperial beacons that warn interstellar travellers to "avoid at all costs," though this has not prevented pirates and fugitives from delving into the Fourteen's depths in search of sanctuary.

Most are dead within solar months, often slain by xenos. The others are identified and destroyed by one of the Iron Lords' fourteen fortresses of the Iron Grip, known as the "Holdfasts," that are responsible for monitoring each star.

The Iron Lords' power armour is painted black with red thigh plates and greaves. The rest of the armour is black, save for the Aquila or Imperialis on the breastplate which is golden. 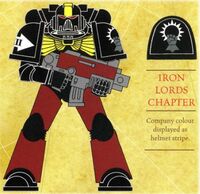 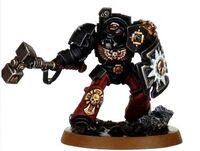 An Iron Lords Assault Terminator in Indomitus Pattern Terminator Armour armed with Thunder Hammer and Storm Shield.
Add a photo to this gallery
Retrieved from "https://warhammer40k.fandom.com/wiki/Iron_Lords?oldid=376491"
Community content is available under CC-BY-SA unless otherwise noted.