"First you turn your back on the Emperor, then you raise arms against the sons of Dorn. Know this; you shall not live out this day to make a third mistake."

"Vigilance! Valour! Vengeance!" or "Strike, death, silent as the swan."

The Chapter's homeworld is the world of Brycantia, also called in some accounts Seheris. A portion of this Chapter became a Chaos warband known as the Iron Brethren, which betrayed the Chapter for the glory of Chaos.

The Iron Knights are one of the 12 Space Marine Chapters who are Successors of the Imperial Fists that send a champion to the centennial Feast of Blades, and are the only Chapter that attends to have won the contest on two consecutive occasions.

"We attack without warning, mercy or hesitation. Let the enemies of Mankind know that we will purge every last one of them, and let them shake in fear."

The Iron Knights is a smaller Chapter of Astartes. It is primarily a Chapter that is used as a full assault force for planetary sieges.

As a Chapter, the Iron Knights treat war as a sport, taking pride in testing their skills in harsh environments and pitting themselves against the most dangerous flora and fauna a planet has to offer as well as the various enemies of mankind.

Brycantia, also perhaps named Seheris, is the homeworld of the Iron Knights Chapter. It is composed of harsh deserts and plains, divided between multiple warring tribes.

The Iron Knights are described as having "gleaming, blue-grey armour." The Iron Knights' Power Armour is painted blue gunmetal, including the Aquila or Imperialis on the chest guard and shoulder plate trim.

The helm and shoulder plate inserts are painted black. The blue-grey squad specialty symbol (Tactical, Assault, Devastator or Veteran) is indicated on both shoulder guards. No company markings are displayed.

The Iron Knights' Chapter badge is a white Cross Crosslet on a black background, displayed on a heraldic shield, or "gardbrace", over the front of the left shoulder guard.

In the Warhammer 40,000: Rulebook (5th Edition), the Iron Knights' homeworld is Brycantia, while in the novel Phalanx, it is named as Seheris. The discrepancy has not yet been rectified. 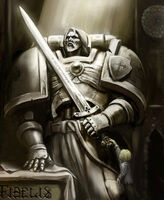 Iron Knights Tactical Squad in standard battle formation
Add a photo to this gallery
Retrieved from "https://warhammer40k.fandom.com/wiki/Iron_Knights?oldid=351413"
Community content is available under CC-BY-SA unless otherwise noted.