Warhammer 40k Wiki
Register
Don't have an account?
Sign In
Advertisement
in: I, Imperium, Space Marine Chapters,
and 3 more
English

Metallic Dark Grey, Black and White
The Iron Hawks is a Loyalist Space Marine Chapter from an unknown Founding and a successor of the Ultramarines.

The Iron Hawks are blessed with pure and complete gene-seed, though they're currently recovering from heavy losses after a particularly long and gruelling campaign.

Despite being strict adherents to the Codex Astartes, they've garnered a reputation for the brutal effectiveness of their high-speed assaults aboard Thunderhawk gunships.

The Iron Hawks revere their Primarch Roboute Guilliman above all others -- save the Emperor -- and they loathe those who have turned their backs on the Imperium.

The Iron Hawks' Chapter planet is called Stormfall and it is located in the portion of the Ultima Segmentum on the far side of the Great Rift in the Imperium Nihilus.

A white Low Gothic numeral is stenciled on the centre of the squad specialty symbol, which indicates squad number.

The Iron Hawks' Chapter badge is a white profile of a stylised hawk's head on a field of black.

This Iron Hawks Stormraven is piloted by Techmarine Chiron, while the Stormraven's guns are operated by Sigma-IX, a servitor and failed Chapter aspirant. 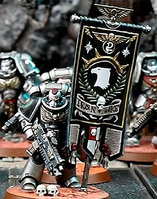 An Iron Hawks Primaris Marine Ancient, bearing one of his Chapter's standards into battle.