An Iron Claw, sometimes referred to as a Servo Claw, is an enormous close combat weapon that is used, sometimes as part of a pair, by Soul Grinders, Defilers, and Plague Hulks, large multi-legged Daemon Engines in the service of the Forces of Chaos. Iron Claws are classified as Dreadnought Close Combat Weapons by Imperial standards. The weapons usually take the form of large, piston-driven claws featuring three bladed talons or bladed fingers and are fully capable of tearing main battle tanks into pieces and wiping out entire squads of infantry in a single sweep. Iron Claws are also capable of being used as siege weapons, and can tear through walls and fortifications as if they were no more substantial than tissue paper. Soul Grinders are usually armed with a single Iron Claw on their left arm, but are also capable of being armed with one on each arm. The Soul Grinder can also be outfitted with a second Iron Claw that is mounted on the creature's right wrist, fitted around the beast's Harvester Cannon. When used in this way, the second claw is shaped in the form of a massive organic pincer. The Plague Hulk and Defiler Damon Engines are equipped with two Iron Claws located on the front of the machine's chassis and these Iron Claws are usually somewhat smaller than the ones used by Soul Grinders.

A Soul Grinder's Iron Claw, this Iron Claw is shaped more like a fist, featuring bladed fingers instead of large talons 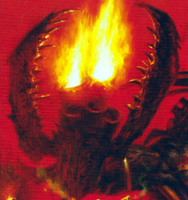 A Soul Grinder armed with a second Iron Claw, this claw takes the form of a large organic pincer located on the same arm as the beast's Harvester Cannon 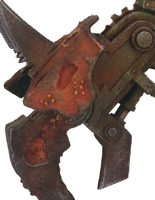 A closeup of a rusted Iron Claw used by a Plague Hulk
Add a photo to this gallery
Retrieved from "https://warhammer40k.fandom.com/wiki/Iron_Claw?oldid=268524"
Community content is available under CC-BY-SA unless otherwise noted.