The Ion Gauntlet Shield is a type of Ion Shield used by the combat walkers of the Questor Imperialis, the Imperial Knights, and by the Renegade Knights of the Questor Traitoris. The Ion Shield Gauntlet is found only on the Cerastus Knight-Lancer. The Gauntlet Shield works similarly to the more common Ion Shields found on other Knight armours, but instead of being projected from the Knight's torso in the direction of enemy fire, the Ion Gauntlet Shield is generated inside of a massive shield-shaped projector equipped to the Knight-Lancer's gauntlet assembly.

This defensive energy shield is many times more concentrated than a standard Ion Shield, though it lacks the latter's tactical flexibility. The Ion Gauntlet Shield is used in conjunction with the Lancer's Cerastus Shock Lance, and protects the Knight-Lancer from attacks as it closes with the enemy to deliver a killing blow with its powered lance. 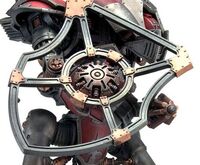 An Ion Gauntlet Shield as seen from the front of the shield
Add a photo to this gallery
Retrieved from "https://warhammer40k.fandom.com/wiki/Ion_Gauntlet_Shield?oldid=314705"
Community content is available under CC-BY-SA unless otherwise noted.