An Invictarus Suzerain, known also as a Suzerain Invictarus (pl. Invictarii) is a bygone specialist rank utilised exclusively by the Ultramarines Legion during the Great Crusade and Horus Heresy eras in the 30th and 31st Millennia. They are the precursors of the Ultramarines elite warriors that serve in the Chapter's Honour Guard in the 41st Millennium.

Those warriors who served in this elite echelon were recognised for the legendary deeds they had accomplished in service to the Imperium, and were bestowed with Invictarii armour -- finely detailed, artificer-wrought Power Armour in recognition of their deeds. This armour was often worn by those who had served in the elite echelon of the Invictarii before being assigned command. The Invictarii was a Veteran cadre which served both as a Legion elite and as a pool of warriors who, through their actions, had singled themselves out for potential future high command, not simply by bravery or skill at arms, but also for displaying a talent in governance, organisation and administration.

The Invictarus Suzerains existed as a class apart form the line units of the Legiones Astartes Ultramarines, for they served the Primarch and the Tetrachs directly. Chosen from the ranks, each Suzerain was a warrior marked for future greatness and high command. It was from the Invictarus Suzerains that many of the Legion's future officers were drawn, and in fulfilling their many and varied duties, they learned not only the arts of war, but those of order, leadership and governance.

Their ranks formed the core outside the usual Legion structure devoted in no small part to the control and order of the Ultramarines' writ of domain, and increased in number as the Legion itself expanded and the Realm of Ultramar with it. The Invictarii formed the retinues of the Tetrarchs of Ultramar, and functioned as a military force for the defence of that fiefdom, arbiters of law for the population and an Honour Guard for their commander in battle.

The individual forces of these Suzerain Invictarus varied in size, with Tetrarch Amyntas maintaining a force of several thousand as feared peacekeepers in the troubled worlds around Iax, while Tetrarch Lamiad had but one hundred in his guard, partly in deference to the Mechanicum warriors who stood in Konor's defence and did not need aid in doing so. Outside of the Suzerain forces, members of the Invictarii could also be found in limited numbers spread through the Legion's Veteran units and various sub-stratas of command (although by number only a fraction of all Veterans, officers or Sergeants ranked amongst them) gaining further battlefield experience and honing their skills by field command.

The warriors of the Inivctarus Suzerains were living embodiments of their Primarch's rule and they bore arms and armour intended to exemplify this ideal. Their Legatine Power Axes were ancient symbols once carried by the heralds of the battle-kings of Macragge, but they were more than signs of office, they were used to enact instant justice on any who would defy the Primarch's will. They bore shields with which to hold anarchy and disorder at bay and respendent armour that shone with the light of their Primarch's wisdom and authority.

An Ultramarines Legion Centurion of the Suzerain Invictarus 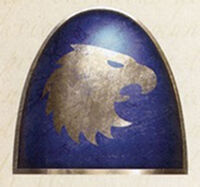 An Ultramarines Legion Boarding Shield (Honour Variant) Note: The XIIIth Legion often equipped its elite Invictarus Suzerain squads with artificer-wrought boarding shields which many Invictarii continue to bear in their subsequent service in the ranks of the Legion's officer cadre.
Add a photo to this gallery
Retrieved from "https://warhammer40k.fandom.com/wiki/Invictarus_Suzerain?oldid=326666"
Community content is available under CC-BY-SA unless otherwise noted.