An Incubus (pl. Incubi) is a member of a mercenary order of Drukhari, very similar to the Aspect Warriors of their Craftworld counterparts, who dedicate themselves to the perfection of the killing strike. Their services are in great demand, whether as bodyguards or shock troops, and the Incubi will fight for any who can afford to purchase their loyalty. Their obsession is the mastery of the Klaive, a bladed melee weapon that becomes as much a part of an Incubus as his own murderous heart.

In battle the Incubi wield these weapons with lethal precision, their every swing severing limbs and shattering blades with contemptuous ease. The act of becoming an Incubus is dangerous in the extreme; through long and gruelling practice, the strong prosper, while the weak are cut down and their bodies burnt as an offering to the statue of Khaine, the Aeldari God of War, at the heart of each Incubus shrine.

The Incubi are an order of faceless warriors, masters in the use of the long-bladed weapon known as the Klaive. Everything about a fully armoured Incubus conveys menace. His armour is spiked and segmented from top to toe, and his ornate helm is framed by a pair of great razored horns that lend him an almost daemonic aspect. Incubi possess a sinuous and sinister grace, and each of their movements sings with their barely suppressed potential for violence. Their every waking moment is dedicated to the absolute perfection of their craft -- that of killing as frequently and as cruelly as possible with their ritual weapon.

In this way the Incubi echo the Aspect Warriors of their Craftworld kin, supplanting purity of purpose with twisted obsession, and icy calm with channelled hate. It is believed that the very first Incubus was the first Phoenix Lord of the Striking Scorpions Aspect Warriors, Arhra, the "Father of Scorpions," now usually referred to as the "Fallen Phoenix," who fell to the service of Slaanesh by walking the Path of Damnation and joined the Drukhari. Arhra became the first Hierarch of the Incubi and created the first Incubus Shrine in the Dark City of Commorragh. Some believe Arhra to be Drazhar, the Master of Blades, the greatest of the Dark Eldar Incubi.

The Incubi do not swear allegiance to any specific Kabal or Wych Cult, as servants of Khaela Mensha Khaine, their loyalty is first and foremost to their war-shrine, an aspect in which they are eerily similar to the Craftworld Aeldari Aspect Warriors. There are dozens of Incubi shrines dotted throughout the Dark City, from towering pinnacles of black crystal to labyrinthine networks of brazier-lit caverns. While the smallest of these shrines may play host to no more than a handful of Incubi -- taking the form of a central shrine surrounded by the trophy-hung cells of the Incubi who train there -- the larger shrines are rather more spectacular.

The Hierarchs, the dark counterparts of the Asuryani Exarchs, who rule these shrines are powerful individuals in their own right, mercenary warrior-kings who know that to flaunt their wealth and status is to see it increase. The Hierarch is the spokesperson of his Incubus Shrine with the rest of Commorragh, and it is he who will bargain with prospective patrons, and cull the most valuable initiates from amongst the many aspirants eager to steep themselves in the murderous arts.

Their domains are sprawling bastions, forested with howling marble statues and grotesqueries of twisted architecture. In their cavernous central shrines, aspirants and supplicants in their thousands come to barter for the services of the Incubi, or to beg entrance into this black-hearted brotherhood. These forbidding obsidian shrines are filled with patrons and aspirants eager to learn the deadly arts of the Incubi.

The only way to stay alive is to quickly master everything taught by the Hierarch. Through long and gruelling training, the strong will prosper and learn, while those who are weak will fail, be slain and their bodies burnt as an offering to the monstrous statues of the War God Khaine which loom over the bloody proceedings below, graven from precious metals and strange stones gathered from realspace and the depths of the Webway alike. Those whose demands or pleas are denied may find themselves ritually gutted, their still-living bodies flung into the green fires of the ceremonial pits that surround the statues. The screams of these unfortunates echo to the arcing vaults above, the flickering firelight seeming to make Khaine's visage sneer in approval.

Should an aspirant actually live long enough to defeat an Incubus in combat and take his armour from him, the final training will begin. At that point, the initiate will only have one last trial to fulfill -- kill an Aspect Warrior of the Aeldari Craftworlds in single combat, claim their prey's precious Soul Stone, and ultimately debase and rebuild it into a psychic torture device known as a Tormentor.

Only when this is done can the initiate truly call himself an Incubus, and be formally inducted by the Hierarch as an Incubus and take his place amongst his dark brethren at the heart of the shrine. The same process is applied for promotion within an Incubus Shrine: should an Incubus desire promotion, he must challenge and best the holder of the place he covets in personal combat.

Unlike everywhere else in Commorragh, assassination is not tolerated amongst the Incubi. Should a Hierarch fall on the field of battle, the Incubi will fight amongst themselves to determine which one will become the new Hierarch of their shrine. This process of selection ensures that only the best warriors ever remain Incubi or Hierarchs for long, ensuring that the quality of the service they offer remains at a peak.

For every supplicant fed to the murderflame, there is another whose offerings are considered sufficient. For such individuals the Incubi will march to war, lending their skills to their employer's cause with a totality of focus that is frightening to behold. When acting as bodyguards to an Archon, the Incubi will surround their master in an impenetrable ring of flickering blades, the Archon pacing calmly through the fiercest melee as if in the eye of a blood-slick storm.

The Incubi also serve as exceptional enforcers; more than one Commorrite pleasure den or smuggler's spire has been reduced to a limb-strewn abattoir by a host of Incubi sending a message to their employer's rivals. Incubi see themselves as living weapons; each warrior is one with his Klaive and conditioned to follow the commands of his Klaivex leader to the letter. However they are deployed, whatever task they are set, a band of Incubi will act as a deadly blade in their employer's hand. Of course, this is still Commorragh, and even the finest blade can cut both ways.

Due to the time-honoured tradition of promotion through assassination that defines Drukhari society, the service of Incubi as bodyguards is highly sought after. Incubi are by their nature completely neutral in matters of a Kabal's hierarchy. They follow the code of their contract zealously, and are elite warriors, all of which make them perfect bodyguards.

Few Archons ever hesitate to invest their raiding spoils into securing the exclusive assistance of an Hierarch and his shrine of Incubi, and any subordinate who wishes to attempt to take the place of the Archon must first find some loophole or circumstance that will make such a contract void, lest he wishes to face the Incubi in combat.

"Raw ability alone is worthless. Through strife, we grow strong."

The Incubi focus not on the artistry of death-dealing like the Wych Cults, but on the pragmatic method of killing their opponent as efficiently and quickly as possible. Though they are trained in the use of every form of blade and ranged weapon, they favour the use of the potent Power Swords they call Klaives.

A Drukhari Klaive is a master-crafted weapon, displaying the exquisite balance and form to be expected from a work of Aeldari craftsmanship. The Incubi consider the Klaive to be the only weapon properly used by any true warrior, though the Incubi's warleaders, who bear the title of Klaivex, sometimes favour the usage of such variants as the Demi-Klaive, two smaller powered blades that can be wielded separately or clasped together to form a much larger sword that adds to the wielder's strength. Every Klaivex is a born killer whose skill in taking lives is so extraordinary that even other Dark Eldar believe there must be something supernatural about their power.

Despite their skill in one-on-one duels, Incubi scorn fair fights in actual combat conditions. When they close with their enemy, they send out waves of damaging neural energy from the Tormentors mounted on their armour's chestplate, leaving their enemies wracked with pain before the killing can truly begin. Some Incubi also possess special Tormentors known as Bloodstones that are crafted from the broken Spirit Stone of a slain Eldar Exarch. These weapons can fire a neural pulse so powerful that they can boil an enemy's blood, killing him outright from afar.

Incubi are trained in the use of many different weapons unique to their warrior sect. Almost all Incubi favour a great two-handed Power Sword they call a Klaive. A Klaive is a masterpiece of balance and form; the Incubi consider Klaives to be the one and only true weapon. However some Incubus shrines prefer to promote the use of a Punisher, a two-handed Power Weapon resembling a halberd, manufactured in such a way as to assist the wielder when swinging, effectively increasing the strength and reach of their attacks.

All Incubi are equipped with an extremely resilient suit of armor, called an Incubus Warsuit. The Incubi jealously keep the procedures to manufacture and repair such armour to themselves, and as such they are the only ones to wear them. An Incubus Warsuit offers protection similar to a Space Marine's Power Armour, without inhibiting its bearer's movement in the least. The helmet of the suit incorporates the signature Tormentor weapon of the Incubi. Some Incubi possess a Bloodstone, a rare and exotic Tormentor forged from the broken Spirit Stone of a Craftworld Exarch, that can boil an enemy's blood with a pulse of potent energy.

More experienced Incubi known as Klaivexes who serve in the role of squad leader to their fellows sometimes favour the versatile Demi-klaives, paired Power Weapons which can be wielded either separately to increase the amount of strikes the user can make, or clasped together to form a much larger blade, thus increasing the force of the blows. 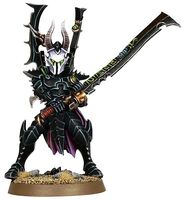 A Drukhari Incubus wielding his Klaive.

Incubi from the Shrine of Splintered Bone. 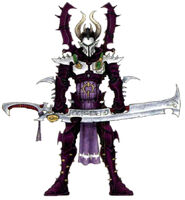 A Klaivex of the Shrine of Cursed Night. 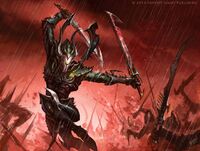 A Drukhari Incubus performing his dance of death.

A group of five Incubi prepared for combat.
Add a photo to this gallery
Retrieved from "https://warhammer40k.fandom.com/wiki/Incubus?oldid=353167"
Community content is available under CC-BY-SA unless otherwise noted.